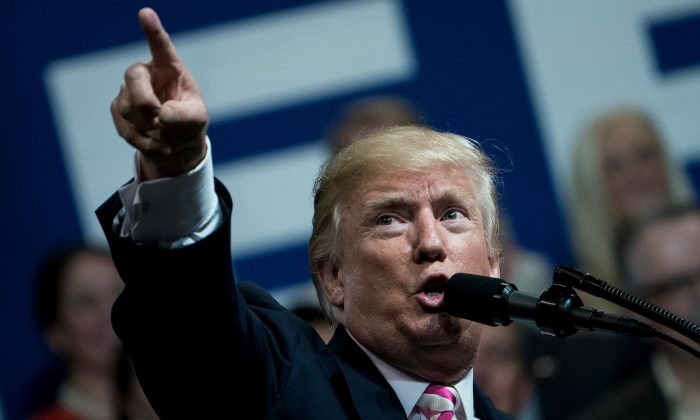 Trump Calls Out NFL Players for Lack of Respect

President Donald Trump called out NFL players who refuse to stand for the national anthem, saying NFL owners should fire them.

“We are proud of our country, we respect our flag,” he said at the rally organized in support of Luther Strange to permanently fill Jeff Sessions Senate seat.

He then took aim at those who he said disrespect what America stands for.

He told the crowd “wouldn’t you love to see” one of the owners of an NFL club fire a player if he disrespects the flag. “He’s fired. He’s fired,” Trump said as the crowd started chanting USA, USA.

Trump said the NFL owners who decide to do so will become “the most popular people in this country.”

San Francisco 49ers quarterback Colin Kaepernick first started the trend among NFL players when he refused to stand for the national anthem last season, first sitting on the bench, and then deciding to kneel instead of stand.

Colin, who is currently an unsigned free agent, has since been followed by a number of other players who have either sat on the bench, kneeled, or raised their fist above their head during the anthem this season.

Trump encouraged the crowd to leave the stadium if they saw players refusing to stand for the anthem.

“Even if its only one player, leave the stadium. I guarantee, things will stop, just pick up and leave,” Trump said.

NFL ratings have been down so far this season.

Trump followed up on his statements the following day with a series of tweets.

If a player wants the privilege of making millions of dollars in the NFL,or other leagues, he or she should not be allowed to disrespect….

…our Great American Flag (or Country) and should stand for the National Anthem. If not, YOU'RE FIRED. Find something else to do!

Trump also said that an invitation for NBA player Stephen Curry was withdrawn, after he said he wasn’t sure if he wanted to go to the White House.

Going to the White House is considered a great honor for a championship team.Stephen Curry is hesitating,therefore invitation is withdrawn!

Trump was in Alabama to rally for Strange who is facing a challenging primary opponent in Republican Roy Moore.

Moore is ahead of Strange by 8 points in the polls, but Strange has made significant gains since Trump endorsed him in August.

In his speech, Trump spoke about a wide range of topics, including about the importance of American values and religious liberty.

“Isn’t it a little weird, when a guy who lives on 5th Avenue, in the most beautiful apartment you’ve ever seen, comes to Alabama and Alabama loves that guy. I mean its crazy,” Trump said in the high energy speech.