Trump Calls on Supporters to Stand Tall: ‘Don’t Be Intimidated by These People’ 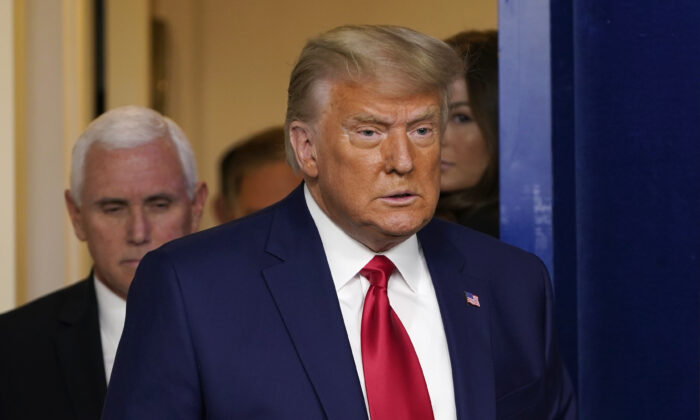 President Donald Trump, calling in at a Senate Republican hearing in Pennsylvania on Wednesday, called on GOP surrogates and his supporters to not back down in the face of threats and push back as his legal team challenges the result of the election.

“If you were a Republican poll worker you were treated like a dog,” Trump said on a call as his lawyer, Jenna Ellis, held up her phone to the microphone. He was referring to complaints from sworn affidavits about poll watchers being denied access to vote-tabulation efforts on Nov. 3 and beyond in places like Philadelphia and Detroit.

“Our poll watchers were pushed out of the building … don’t be intimidated by these people,” Trump said, while also referring to threats and a pressure campaign against his legal team.

Several lawyers stopped representing the president in Pennsylvania, citing harassment. One lawyer, Linda Kerns, was placed under protection due to “threats of harm” when an employee of another law firm representing Pennsylvania Secretary of State Kathy Boockvar allegedly threatened her over the phone.

Trump further said that those engaged in a pressure campaign against Trump surrogates, lawyers, or Republicans are “horrible people,” who “don’t love our country.”

Later, Trump stated that his goal, in no uncertain terms, is “to turn the election over.” What happened in the United States, he said, was “many, many cases” of fraud.”

“They cheated. It was a fraudulent election,” he added, signaling that he is nowhere close to conceding.

“This election was rigged and we can’t let that happen. We can’t let it happen for our country. And this election has to be turned around, because we won Pennsylvania by a lot and we won all these swing states by a lot,” the president said.

Secretaries of state in Michigan, Pennsylvania, Arizona, Georgia, and elsewhere said they have seen no evidence of fraud or irregularities that would overturn the result of the election.

Following Trump’s remarks, Attorney General Josh Shapiro wrote: “The sitting president’s remarks today were devoid of reality. The election is over. Pennsylvania has certified results & declared Joe Biden the winner of our Commonwealth.”

In Pennsylvania, Trump’s legal team scored a win when Judge Patricia McCullough ordered the state to not take any further steps to complete the certification of the presidential race.

“To the extent that there remains any further action to perfect the certification of the results of the 2020 General Election for the offices of President and Vice President of the United States of America, respondents are preliminarily enjoined from doing so, pending an evidentiary hearing to be held on Friday,” the judge wrote in her order (pdf). “Respondents are preliminarily enjoined from certifying the remaining results of the election, pending the evidentiary hearing.”