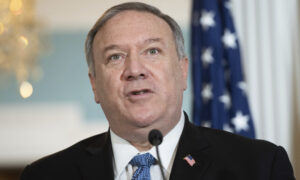 'No violence, no law-breaking, and no vandalism of any kind'
By Mimi Nguyen Ly
biggersmaller
Print

President Donald Trump issued a public message to the nation in a video issued late Wednesday, calling on Americans to promote peace, amid reports of planned demonstrations to take place in the coming days.

“Over the course of the past year, made so difficult because of COVID-19, we have seen political violence spiral out of control. We have seen too many riots, too many mobs, too many acts of intimidation and destruction. It must stop,” he said.

“Whether you are on the right or on the left, a Democrat or a Republican, there is never a justification for violence. No excuses, no exceptions. America is a nation of laws. Those who engaged in the attacks last week will be brought to justice.”

“Now I am asking everyone who has ever believed in our agenda to be thinking of ways to ease tensions, calm tempers, and help to promote peace in our country,” he continued. “There has been reporting that additional demonstrations are being planned in the coming days, both here in Washington and across the country.”

“I have been briefed by the U.S. Secret Service on the potential threats. Every American deserves to have their voices heard in a respectful and peaceful way. That is your First Amendment right. But I must emphasize that there must be no violence, no law-breaking, and no vandalism of any kind.”

The president opened his speech by condemning acts of violence that took place amid the civil unrest on U.S. Capitol grounds on Jan. 6, when lawmakers gathered to count, debate, and certify electoral college votes for president-elect Joe Biden.

“The incursion of the U.S. Capitol struck at the very heart of our republic. It angered and appalled millions of Americans across the political spectrum,” he said. “I want to be very clear, I unequivocally condemn the violence that we saw last week. Violence and vandalism have absolutely no place in our country and no place in our movement. Making America Great Again has always been about defending the rule of law, supporting the men and women of law enforcement, and upholding our nation’s most sacred traditions and values.”

Trump’s remarks come after Democrats in the House of Representatives, joined by 10 Republicans, just moments earlier voted to impeach him for a second time, alleging in a single article of impeachment that he incited an insurrection that resulted in the breach of the U.S. Capitol on Jan. 6.

Trump has, since Jan. 6, repeatedly called for peace and repeatedly condemned the violence that took place at and near the U.S. Capitol that day. The violence occurred amid otherwise peaceful protests that were taking place in surrounding areas calling for election integrity.

The breach of the Capitol building on Jan. 6 by a group of rioters interrupted lawmakers for several hours before congressional proceedings resumed. One woman, Air Force veteran Ashley Babbitt (also spelt Ashli), died that day after being shot by a Capitol police officer inside the building. It is unclear who instigated the breach of the building. A video of the event shows a known left-wing activist encouraging and convincing Capitol police to let trespassers through at several points.

Separately, the civil unrest on Capitol grounds left at least four more people dead—three due to medical conditions, and a U.S. Capitol Police officer was confirmed dead by the department on Jan. 7, due to injuries sustained while on duty responding to riots.

On Monday, Trump approved the District of Columbia’s emergency declaration after a request by Washington Mayor Muriel Bowser, who in her letter to the president, said that “further violence is likely during the Inaugural period.” She also wrote that based on intelligence assessments her administration has received, “we must prepare for large groups of trained and armed extremists to come to Washington, DC.”

More than 20,000 National Guard troops are expected in the city by Jan. 20, Inauguration Day.

The Department of Homeland Security will begin National Special Security Event operations for the Jan. 20 inauguration effective on Jan. 13 instead of Jan. 19, due to “events of the past week and the evolving security landscape leading up to the inauguration.”