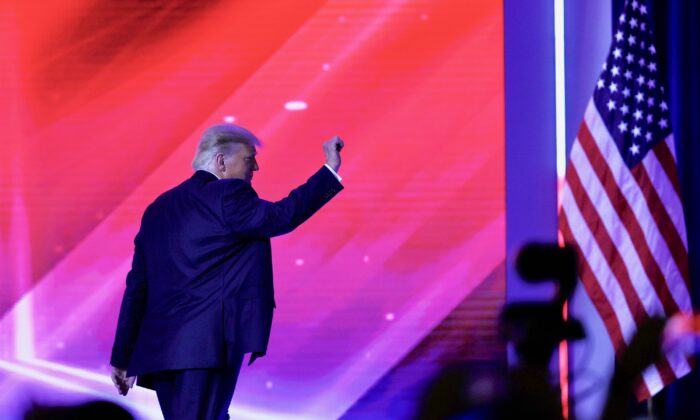 Trump Builds Leverage for ‘Overhaul’ of GOP With Fundraising Gambit

Former President Donald Trump over the past two weeks laid the foundation for exerting financial leverage over the Republican Party apparatus by instructing supporters to donate solely to his campaign website and political action committee, while demanding that the Republican National Committee (RNC) and its congressional chamber affiliates stop using his name and likeness to raise funds.

The stratagem is all but sure to split a substantial chunk of donations from the GOP and allow Trump to divert money from the RNC that could otherwise end up bankrolling the campaigns of the Republicans he is looking to oust. Given the president’s immense popularity among Republican voters, the RNC, the National Republican Senatorial Committee (NRSC), and the National Republican Congressional Committee (NRCC) face the dire prospect of raising funds with the handicap of being unable to use the name of the man who reigns supreme over the Republican Party due to his ability to energize the base and pull in a mass of small donors.

“He could cripple them doing this. They will have to rely on larger donors that cannot give unlimited sums of money,” Rich Baris, the director of Big Data Poll, told The Epoch Times.

“And that low-dollar base that drove Trump’s fundraising when he had a committee joint with the RNC … it’ll probably take some time, but most of them will get the message, and they’ll give to Trump’s PAC instead.”

The RNC on March 8 brushed aside Trump’s cease-and-desist letter, arguing in a letter obtained by The Epoch Times that it’s within the organization’s First Amendment rights to use the name of a public figure to raise funds.

The move prompted a fiery statement from Trump again instructing supporters to donate to his website and political action committee (PAC) rather than the RNC.

“No more money for RINOS,” Trump said in a statement, using an acronym for Republicans in Name Only. “They do nothing but hurt the Republican Party and our great voting base—they will never lead us to Greatness. Send your donation to Save America PAC at DonaldJTrump.com. We will bring it all back stronger than ever before!”

The RNC’s letter, written by chief counsel Justin Riemer, states that Trump and RNC Chairwoman Ronna McDaniel enjoy a close relationship, alleging that the former president over the weekend reaffirmed to her that he approves of the RNC’s current use of his name in fundraising and other materials, including for an upcoming donor retreat event in Palm Beach, Florida, in which Trump is slated to participate.

“The RNC has not sent any fundraising requests in President Trump’s name or used his image since before he left office, nor would it do so without his prior approval,” Riemer wrote.

Trump had made the initial appeal to supporters to donate only to his PAC, during a highly anticipated speech at the Conservative Political Action Conference (CPAC) on Feb. 28. The address marked Trump’s first public appearance after leaving the White House. The excommunication of his social media profiles by the Silicon Valley giants amplified the silence and suspense ahead of the speech.

As a testament to Trump’s appeal, the speech was viewed by 5.7 million people on Fox News, breaking the network’s all-time Sunday viewership record. More than 30 million people have watched the speech online, according to streaming data from VFT Solutions.

Trump made the fundraising remarks during the portion of the CPAC speech devoted to election integrity. He expressed doubts over the legitimacy of President Joe Biden’s 2020 victory. The choice of context is notable because the RNC appears to have left Trump to vie for himself in the aftermath of the Nov. 3 election. Neither the RNC nor the NRSC nor the NRCC was a party to any of the election lawsuits Trump filed. McDaniel, the RNC chairwoman, has not gone on record to affirm Trump’s doubts about the election.

Michael Johns, co-founder of the National Tea Party movement, told The Epoch Times: “You look at the election integrity issues of 2020 and ask who is responsible for maintaining that integrity, and it would have to fall back on the RNC, which raised about $900 million this last election cycle and appears not to have been sufficiently involved, before the election, during the election, or after the election in contesting it.”

“It’s incredible to me that we’ve had to rely on an American entrepreneur who owns a pillow company and on a very bright trade adviser … to take up the arguments that you would think, logically, would be made by the RNC,” Johns added, referring to MyPillow CEO Mike Lindell and Peter Navarro, Trump’s director of the White House Office of Trade and Manufacturing Policy.

A week after the CPAC speech, a Trump adviser confirmed to The Epoch Times that the president sent cease-and-desist letters demanding that the RNC, the NRSC, and the NRCC stop using his name and likeness. Calls placed to the three committees went unanswered.

As of the morning of March 7, the NRCC was still using Trump’s name in its standard messaging for new email list registrations. The home page of the NRSC advertised Trump T-shirts from its online shop.

Setting up a war chest of his own will allow Trump to spend money against Republican incumbents who would otherwise receive the backing of the RNC. That includes Sen. Lisa Murkowski (R-Alaska), who is the only Republican senator running for reelection in 2022 of the seven who voted to convict Trump during the second impeachment trial, which concluded with the Senate acquitting Trump. The former president issued a statement on March 6 vowing to campaign against Murkowski, who is serving her third term.

There is no precedent in modern politics of the RNC backing a primary challenger against a Republican incumbent, according to Johns, the National Tea Party movement co-founder. Johns said the RNC hasn’t been meaningfully aligned with Trump’s Make America Great Again (MAGA) agenda and, over the past four years, has often backed primary opponents against pro-MAGA candidates. As a result, the 10 House Republicans who voted to impeach Trump would have been running for reelection with money the RNC raised using the president’s name.

“He ran to overhaul and save the country, but also to overhaul and save the Republican Party that was not addressing some of the core issues of the time, like China, trade, immigration, in a forceful enough way, and was relying on professional consultants, had become very insular, was not engaged in building the party out in much of a populist way,” Johns said.

“Four years later, that largely continues to be the case. The party operations, the party leadership are not completely Trump-driven. And it only makes sense that if the donor intent is to support President Trump’s 2024 candidacy, potentially, or whether it’s to support candidates that are Trump-aligned in 2022, that you would donate through his vehicles directly and not to the party, which is going to continue to back, for instance, these 10 House members who voted for his impeachment,” he said. “The president’s initiatives are sensible, and perhaps even overdue.”

Aside from Murkowski, five establishment GOP senators will not run for reelection in 2022, including two who voted to convict Trump during the Senate trial, Sen. Patrick J. Toomey (R-Pa.) and Sen. Richard Burr (R-N.C.). The retirements, coupled with Trump’s fundraising stratagem, open the field for Trump to fundamentally reshape the Senate by backing candidates aligned with his America First platform.

Trump will also be able to invest in the primary challenge against Rep. Liz Cheney (R-Wyo.), who issued a scathing statement against him before voting in favor of impeaching him.

Jason Meister, a member of the Trump advisory board, told The Epoch Times: “This keeps him in control. They need to work through him if they want to raise money off of him. I don’t see why anyone would think they could continue to ride his coattails without his approval. Not to mention that many candidates that these organizations support aren’t America First candidates.

“Trump needs his supporters flush with cash so that when it’s time to raise money for America First candidates and the America First agenda, they have the resources. There’s only so many times you can go to the same well.”

In another sign of Trump’s expanding ascendancy over the Republican Party, the RNC has moved a portion of its spring donor retreat to Mar-a-Lago, according to a Republican attending the event. Mar-a-Lago is Trump’s exclusive club and residence in Palm Beach, Florida.