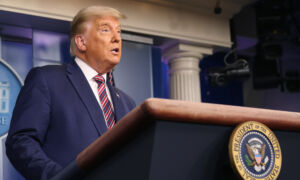 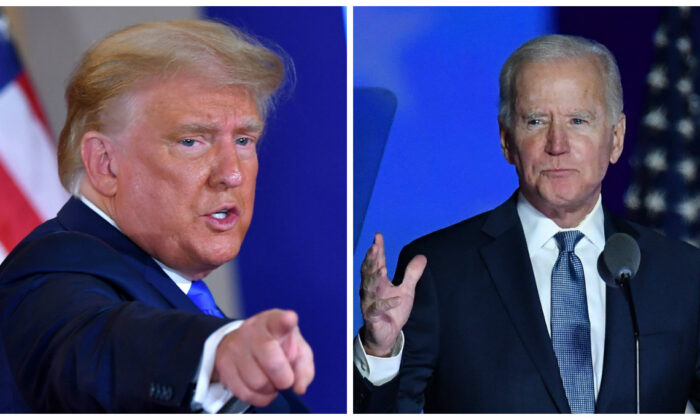 As ballot counts wind down, President Donald Trump and his campaign have launched legal fights in several battleground states asking courts to protect the integrity of the voting and counting process.

“We believe the American people deserve to have full transparency into all vote counting and election certification, and that this is no longer about any single election. This is about the integrity of our entire election process,” Trump said in a statement on Friday.

“From the beginning, we have said that all legal ballots must be counted and all illegal ballots should not be counted, yet we have met resistance to this basic principle by Democrats at every turn. We will pursue this process through every aspect of the law to guarantee that the American people have confidence in our government. I will never give up fighting for you and our nation.”

The race for the White House now hinges on several key states—Pennsylvania, Georgia, Nevada, Arizona, and North Carolina—some of which have ballot-counting processes or last-minute changes to election rules that are being challenged in the courts.

As of Friday morning, Trump’s path to 270 electoral votes significantly narrowed after Pennsylvania and Georgia flipped to Democratic nominee Joe Biden after Trump lost a thin lead that he’d held for several days. The election is still undecided as of Friday afternoon.

The election also hangs in the balance due to a litany of lawsuits filed across the country. While some of the cases are still ongoing, cases in Georgia, Michigan, and a federal case in Pennsylvania have been dismissed. A federal judge in Nevada has been asked to hear the Trump campaign’s claim of voter fraud in the state and the Pennsylvania Supreme Court has been requested to review a lower state court decision over Republican observers’ right to observe the ballot count.

The Trump campaign has also asked to join a lawsuit in Arizona that alleges that vote tabulation equipment in metro Phoenix was unable to read a voter’s ballot because she had used a Sharpie pen issued by the county.

Meanwhile, the Trump campaign has also filed a motion in a pending Supreme Court case—cited as Republican Party v. Boockvar—to allow it to join the case. It challenges a Pennsylvania Supreme Court decision that requires election officials to accept absentee ballots received up to three days after Nov. 3. Four of the justices have indicated that they are interested in reviewing that case.

The Trump campaign has also vowed to request a recount in Wisconsin, which they claimed had “irregularities in several Wisconsin counties.”

Over the past few days, Trump has been vocal over the need to protect the sanctity of the ballot box while claiming that Democrats are trying to “steal” the election from him due to efforts to count late-arriving ballots, which he alleges are “illegal.” He and his legal teams have been arguing that mail-in ballots postmarked by Nov. 3 but received after election day should not be counted and that votes that were counted without Republican observers present in the ballot-counting centers should also be considered “illegal votes.”

“I want every legal vote counted. We want openness and transparency—no secret count rooms, no mystery ballots, no illegal votes being cast after Election Day,” Trump told reporters at the White House on Thursday.

Prior to the election, the president and Republicans repeatedly raised concerns over the integrity of the election process especially following Democrats’ push to expand absentee voting this year in response to the CCP (Chinese Communist Party) virus pandemic. Trump and his allies have said the widespread use of mail-in ballots is ripe for voter fraud.

The president also said that he expects his legal efforts to reach the nation’s top court. “U.S. Supreme Court should decide!” Trump wrote in a post on Twitter early Friday.

Trump’s efforts have been supported by Republican lawmakers, who underscored the importance of protecting the integrity of elections.

Faith in our election is as important as the outcome

Similarly, Senate majority leader Mitch McConnell (R-Ky.) also called for “every legal vote” to be counted, while adding that both sides should be allowed to observe the counting process.

In response, a Biden campaign lawyer has called the lawsuits meritless and characterized them as a political strategy.

“I want to emphasize that for their purposes these lawsuits don’t have to have merit. That’s not the purpose. … It is to create an opportunity for them to message falsely about what’s taking place in the electoral process,” lawyer Bob Bauer told the Associated Press.

Bauer also accused the Trump campaign of “continually alleging irregularities, failures of the system, and fraud without any basis.”

Meanwhile, Biden’s message to his supporters this week has been: “Every vote must be counted.” He has also been fundraising to fight the cases filed by the Trump campaign.

“Donald Trump is going to court to stop votes from being counted. We have assembled the largest election protection effort in history to fight back and need your help. Chip in to make sure every vote is counted,” Biden wrote in a Twitter statement on Thursday night.

The former vice president’s message was supported by Rep. Adam Schiff (D-Calif.), who called Trump’s move “the most dishonest and anti-democratic moment in the history of the presidency.”

“Donald Trump lied incessantly about our election and undermined the very foundation of our democracy. We will count every vote. No matter what he says,” Schiff said in his statement on Twitter.

A number of battleground states such as Pennsylvania and North Carolina have allowed for the counting of ballots received after Election Day, which has raised multiple legal questions and rendered great uncertainty about the credibility of the election outcomes in those states.

Election officials in Pennsylvania, for example, are required to accept mail-in and absentee ballots up to three days after the Nov. 3 election, following a state Supreme Court ruling. The ruling is currently being challenged in the U.S. Supreme Court by the Republican Party of Pennsylvania, which argues that the extension of the deadline violates federal law that sets Election Day as the first Tuesday after the first Monday in November, and that the decision to extend the deadline belongs to lawmakers, not the courts.

In October, the U.S. Supreme Court indicated that it was interested in granting a request to review the Pennsylvania Supreme Court’s decision.

“The provisions of the Federal Constitution conferring on state legislatures, not state courts, the authority to make rules governing federal elections would be meaningless if a state court could override the rules adopted by the legislature simply by claiming that a state constitutional provision gave the courts the authority to make whatever rules it thought appropriate for the conduct of a fair election,” Justice Samuel Alito wrote in his statement (pdf). He was joined by Justices Clarence Thomas and Neil Gorsuch.

Although the nation’s top court rejected a request to expeditiously consider a request to review the case, Alito said that the issues presented in the case are of “national importance, and there is a strong likelihood that the State Supreme Court decision violates the Federal Constitution.”

Hans von Spakovsky, a senior legal fellow at the Heritage Foundation, previously told The Epoch Times’ “American Thought Leaders” that he believes the number of absentee ballots that come in after Election Day could make a difference in who wins the election.

Because of that, he added, battleground states such as Pennsylvania and North Carolina could end up in court again to challenge their extension for the delivery of ballots. These extensions granted in both states weren’t issued by lawmakers, but rather by the state Supreme Court and the state Board of Elections, respectively.

Von Spakovsky added he believes that if either side files litigation to contest the outcome of the election, he believes the court would act expeditiously to consider the cases.