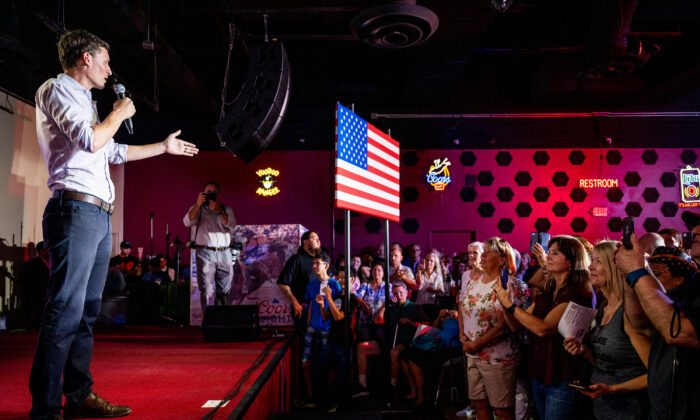 Republican candidate for Senator Blake Masters speaks to supporters during a campaign event at the Whiskey Roads Restaurant & Bar in Tucson, Ariz., on July 31, 2022. (Brandon Bell/Getty Images)
By Nanette Holt

Kelly didn’t have a challenger in the Democratic primary.

Political forecasters who predict election outcomes generally agree on three U.S. Senate races in this cycle being “toss-ups.” Arizona is one. The Senate races in Nevada and Georgia also are considered far too volatile to predict. Democrats currently hold all three seats.

Money has poured in from around the country to help Kelly and the other two incumbents in toss-up races.

In the office he hopes to retain, Kelly inhabits a traditionally Republican territory. Before he took office in 2020, the seat was held by the GOP since the beginning of Barry Goldwater’s term in 1969.

Goldwater’s successor, John McCain, held the seat from 1986 until he died of brain cancer complications in August 2018. McCain, a polarizing figure among Republicans, won his party’s nomination for president in 2008, but lost in the general election to Barack Obama.

To fill the vacancy left by McCain, Arizona Gov. Doug Ducey, a Republican, appointed another former U.S. senator to the seat. Jon Kyl, a Republican, had represented Arizona in the Senate from 1995 until 2013. After replacing McCain, he resigned after almost four months, saying he wanted another appointee to be able to begin the new term in January 2019.

Ducey then appointed Republican Martha McSally, a former congresswoman and Air Force fighter pilot. She held the office for 23 months before Kelly defeated her in November 2020.

Kelly, a former astronaut, passionately pushes for stricter gun laws. He’s the husband of former U.S. Rep. Gabby Giffords, who survived being shot in the head while speaking at a campaign event in Tucson in 2011. In total, 19 people were shot at the event and six died.

Kelly consistently votes with his Democratic Party colleagues. He voted that Trump was guilty and deserved to be impeached of “high crimes and misdemeanors” for his role in the Jan. 6, 2021, U.S. Capitol breach. After the U.S. House voted to impeach Trump, the Senate’s 57-43 vote fell far short of the Constitution’s two-thirds requirement to convict.

Team Trump has fought hard for the former president’s picks in Arizona.

In the final two days before the election, Trump surrogates campaigned for Masters and two other endorsees. Stumping for the three in Tucson and Phoenix were Ric Grenell, former director of national intelligence under Trump, and Kash Patel, chief of staff to Trump administration Acting Secretary of Defense Christopher Miller.

The other two candidates hoping to cash in on the Trump connection were former newswoman-turned-Arizona-gubernatorial-candidate Kari Lake, and Abraham Hamadeh, running to be the state’s attorney general.

Masters has said he believes Trump won the 2020 election that put President Joe Biden in the White House. That set him up in stark contrast to the early favorite in the race, state Attorney General Mark Brnovich.

Since right after the 2020 election, Brnovich faced Trump’s ire for not finding fraud in the results. Brnovich insisted he’d followed the law.

The pro-Trump position on the election and endorsement from the former president propelled Masters into the Aug. 2 election as the expected nominee.

Immigration and the economy were Arizonans’ top issues of concern, the poll showed.

Masters said in a July 13 debate on Newsmax that every illegal border-crosser “at a minimum, deserves to be deported.” He is pro-life and opposes restricting gun laws. He has been critical of Biden administration policies that caused “a recession” and then avoided “responsibility by having the media make up a new definition of ‘recession.'”