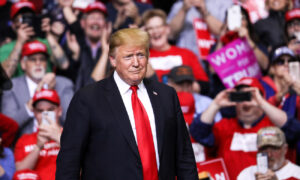 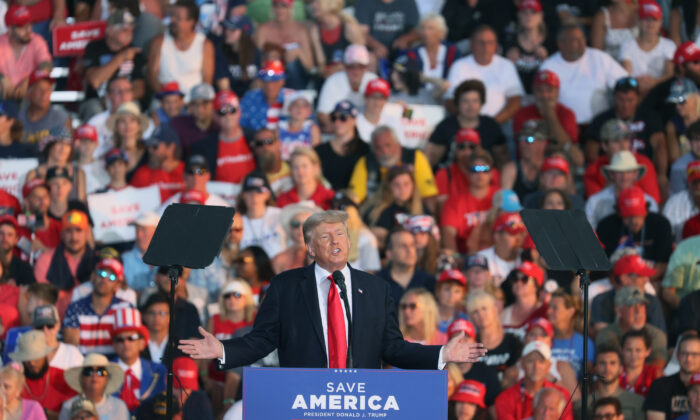 “Kids are on suicide watch,” Trump said among other comments about an “unthinkable” crisis at the southern border.

“There is no more dire threat than the crisis on our southern border, other than perhaps our elections,” he said.

Thousands gathered at Lorain County Fairgrounds in Wellington, Ohio, to listen to the 75-year-old speak at the first of his “Save America” campaign rallies.

Trump vowed to help Republicans “take back the House” and “take back the Senate,” repeating as he has been since leaving office that he is now focused on helping to elect “America first” Republicans—not RINOs (Republicans in name only)—into Congress in the 2022 election.

“America last, not America first,” Trump said of what he called the “reckless” policies of President Joe Biden’s administration.

Trump hinted that he believes the polices in place at the southern border are not being led by Biden himself but by the “radical Democrats” directing the political machinery behind him.

“Immediately upon taking office, Joe Biden deliberately and systematically—through his people because I don’t think he did it—dismantled America’s border defenses and incited a flood of illegal migrants like this country has never seen,” he told the crowd.

“They violated our laws from every single corner of the globe, they were invited in and we can’t do that, we can’t afford it.”

Trump said he believes that Biden has violated his constitutional oath as president by, in effect, surrendering America’s “sovereignty” at the border.

“We need a Republican Congress to shut down the lawless Biden agenda … defund reckless immigration policies, restore our southern border to what it was,” Trump said to chants from the crowd of “four more years.”

“We will end illegal immigration, that horrible term, once and for all,” he said of the Republican efforts.

He also added that he had heard reports of child minors being put on suicide watch after having crossed the border and entering the custody of under-resourced federal agencies.

“For the last three months … illegal alien minors have arrived at our border,” Trump said. “These are, in many cases, wonderful kids and they are coming in at levels that we’ve never seen, and they are sent all around our country. I heard, for the first time, they’re on suicide watch, so many of these young kids—all because of this stupid policy that you’ve been watching over these months.”

The Epoch Times has reached out to the Department of Health and Human Services for a response to Trump’s comments.

Trump touched on a number of other topics, such as the need to allow independent audits to secure Americans’ trust in election systems, the need to ban critical race theory in the military, the weaponizing of law enforcement under Biden to go after Republicans, and the poor ratings of legacy media since he left office.

Trump also claimed the Democratic Party “used COVID” to its favor in the 2020 elections, pointing to the extended mail-in voting measures rolled out in the name of the pandemic and now-contested media coverage of his claims that COVID-19 may have come from a Wuhan lab, which greatly shaped public opinion on how well Trump responded to the health crisis.

He earlier teased the audience with a possible presidential run in 2024.

“It’s possible we will have to win it a third time, it’s possible,” he said, as the crowd chanted “USA, USA, USA.”

Trump used the rally to restate his endorsement of Mike Carey as his preferred Republican candidate for an upcoming special primary election on Aug. 3 for Ohio’s 15th Congressional District.

The seat was recently vacated by former U.S. Rep. Steve Stivers who is going on to serve as president and CEO of the Ohio Chamber of Commerce.

Candidates for the Democratic primary are state Rep. Allison Russo of Upper Arlington and Greg Betts.

Trump also reiterated his support for Max Miller, a Marine veteran who served as Trump’s White House adviser, for the 16th Congressional District seat. He told the rally that Miller has “a passion for this country like you wouldn’t believe.”

Miller played a key role in the Trump administration’s denuclearization negotiations with North Korea as well as negotiations for the Middle East peace deal.

Thank you to the greatest President this country has ever had #45.

You have been the best mentor, teacher, and boss I’ve ever had. Now, let’s put an America First fighter into Congress who actually represents the people and get #TurnCoatTony out! pic.twitter.com/lDl0Tij9nm

Trump was critical of Miller’s competitor, Rep. Anthony Gonzalez, who he called a RINO and a “candidate of Liz Cheney.”

Gonzalez, who claimed that Trump helped “organize and incite a mob” at the U.S. Capitol on Jan. 6, was censured by the Ohio Republican Party in May for voting for Trump to be impeached.

Miller told the rally that if successful, he will “protect and prioritize American jobs” and “fight for the same kind of trade deals that President Trump fought for, the same ones that the Biden administration is trying to undo.”

Trump thanked the crowd, some who had been lining up days before the event, for their support of his “America First” agenda, saying that he was proud to be the first Republican since President Ronald Reagan to win Lorain County in 2020.

“With a Republican Congress, we will fight for more jobs for Ohio families, fair trade for Ohio workers, and more Ohio factories forging more products stamped with that beautiful, beautiful phrase, ‘Made in the USA,'” he said. “We will stand up to China, make them pay trillions in reparations, and ensure that America, not China, dominates the future.”