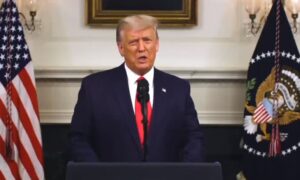 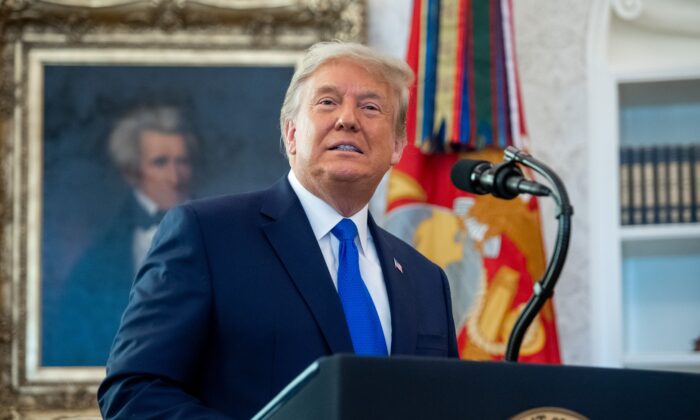 President Donald Trump speaks during a ceremony presenting the Presidential Medal of Freedom to wrestler Dan Gable in the Oval Office of the White House on Dec. 7, 2020. (Saul Loeb/AFP via Getty Images)
Donald Trump

“We move immediately, seamlessly, to plan B, which is to bring lawsuits now in each one of the states. We had them ready. They’re just a version of the one that was brought in the Supreme Court. So last night, the president made the decision,” Rudy Giuliani said during an appearance on “War Room: Pandemic.”

Texas filed a lawsuit in the Supreme Court against Pennsylvania, Georgia, Wisconsin, and Michigan, alleging the elections in those states were run contrary to the Constitution. The nation’s top court rejected the suit late on Dec. 11.

Trump’s team is going to file suits or has already filed in the four states, as well as Arizona and Nevada. The suits will incorporate allegations in the complaint filed by Texas.

“If the state doesn’t have standing, surely the president of the United States has standing. And certainly, the electors in the states have standing. So they will be bringing those very cases right in those courts, starting today,” Giuliani said.

“Let’s see what excuse they can try to use to avoid having a hearing on that.”

Courts have been using the matter of standing to dodge facing the facts, he said.

“Nobody wants to face the reality that this election was stolen.”

“This is outrageous what they’re doing. The American people should have the benefit of hearing these facts. … The facts have been kept from them,” he said.

“Not a single court decision has had a hearing yet. They haven’t heard from a single witness. They haven’t looked at a single tape. They haven’t listened to a single recording. There are thousands of them. They haven’t even bothered to look at the tape in Atlanta, Georgia, which is dispositive. It shows an ongoing voter theft of 30,000 votes, enough to change the election.”

Dozens of election-related lawsuits filed by Trump and others have been rejected in courts. Some were appealed; others are still being decided.

Surveillance footage from State Farm Arena in Atlanta showed poll observers being led to believe that ballot counting was ending around 10:30 p.m. on election night. Once observers and media left, a handful of workers resumed counting, the footage shows.

Georgia officials have claimed nothing in the video was irregular, concluding observers “simply left on their own” while ignoring a verbal announcement that the counting was done for the night.

According to certified counts in Georgia and the other five battleground states where election results are contested, Democratic presidential nominee Joe Biden beat Trump. Trump won all but Nevada in 2016. Biden’s team didn’t immediately respond to a request by The Epoch Times for comment.