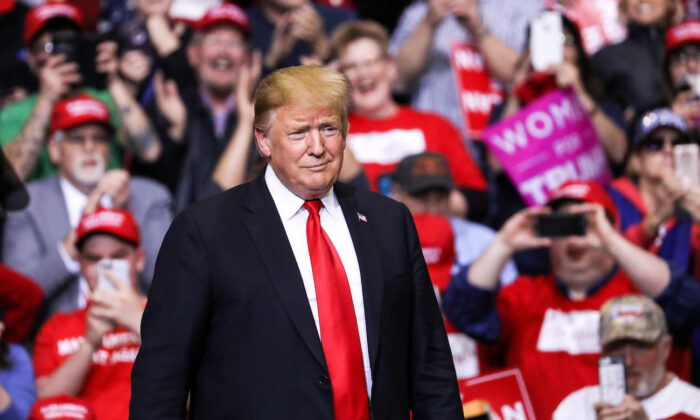 Former President Donald Trump announced on Thursday that he will be holding a “Save America” rally in Sarasota, Florida, over the July 4th weekend.

The “Save America” rally, also billed as a “45 Fest,” will be held on July 3 at the Sarasota Fairgrounds, and is co-sponsored by the Republican Party of Florida, according to a statement from his office.

It will be the former president’s second rally since leaving the White House in January and is in “further support of the MAGA agenda and accomplishments of his administration,” the statement says.

Live music and special guest speakers will feature at the event, with a “HUGE fireworks show to celebrate America following President Trump’s remarks to conclude a full day event commemorating our Great Country,” the statement adds.

Doors open at 2 p.m., and the former president is expected to speak at 8 p.m.

Florida GOP Chair Joe Gruters told The Herald Tribune that he expects it to be an “absolutely amazing event.”

The former president’s first campaign-style rally since leaving office is set for this weekend in Ohio. At the event, Trump will endorse former adviser Max Miller, who is running for Congress, Trump’s Save America PAC stated on June 17.

Trump last spoke to his supporters at a rally on Jan. 6 in Washington. Around the same time, rioters breached the U.S. Capitol building, leading to months of Democratic-led accusations that the former president had “incited an insurrection.”

Throughout his 2016 and 2020 presidential campaigns, Trump held numerous rallies across the United States, sometimes attracting tens of thousands of people. The former president would often point to the size of his rallies as evidence of his popularity.

Trump hasn’t publicly indicated whether he would definitively run for president. However, he has committed to remaining active in politics and has not backed down from a potential presidential run in 2024.

Several Republicans, including two lawmakers, have predicted that Trump will make another bid for the presidency in 2024.