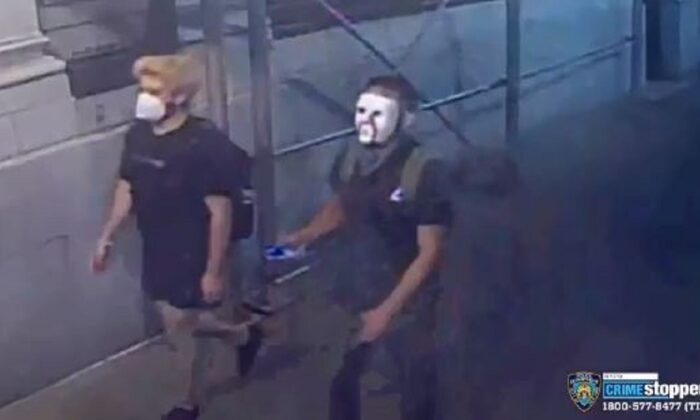 The men caught on video defacing George Washington statues in New York should turn themselves in, President Donald Trump said.

“We are tracking down the two Anarchists who threw paint on the magnificent” statue, the Republican president said in a social media post on Tuesday.

The two males face 10 years in prison, Trump added, urging them to surrender to police.

He referred to the Veterans’ Memorial Preservation and Recognition Act of 2003. The act authorizes a penalty of up to 10 years imprisonment for destroying or attempting to destroy monuments commemorating those who served in the armed forces.

Trump signed an executive order last week that emphasized the federal government would “prosecute to the fullest extent under the law” anyone who incites violence and illegal activity like damaging statues.

Four men were charged with trying to tear down a statue of Andrew Jackson, another former president, near the White House, and Trump shared images of other suspects who authorities are seeking to arrest.

The men, wearing masks, stop around 3:20 a.m. at the main entrance to park and speak with someone who is perched on a bicycle before throwing paint-filled balloons at the statues.

After hurling the balloons, the males fled the scene.

They hit one statue showing Washington as president and another that portrays him as general during the Revolutionary War.

Separate footage showed the males walking on a nearby street.

According to the footage, one suspect wore a black T-shirt, black shorts, and black shoes. He had blonde hair and some facial hair.

The other man wore a black T-shirt, tan shorts, and black shoes. He had dark hair.

Anyone with information about where the suspects are were told to call Crime Stoppers at 800-577-TIPS or submit tips online at nypdcrimestoppers.com, or on Twitter @NYPDTips.

A $2,500 reward is being offered for information that leads to their capture.