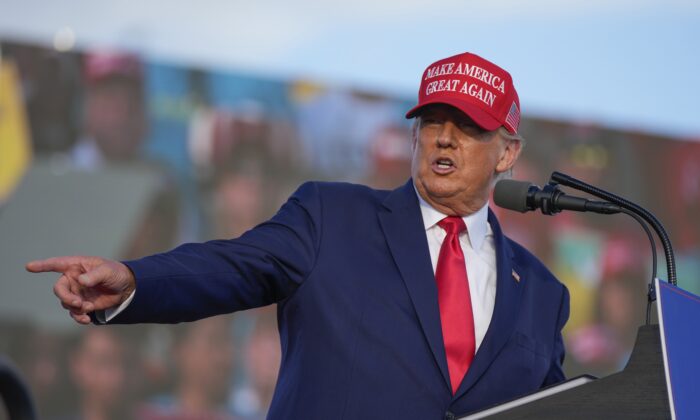 Former President Donald Trump speaks at a campaign rally in support of the campaign of Sen. Marco Rubio (R-Fla), at the Miami-Dade County Fair and Exposition in Miami on Nov. 6, 2022. (Rebecca Blackwell/AP Photo)
By Tom Ozimek

Trump said in a post on Truth Social that “possibly corrupt” officials had “lost control of the tainted Election in Arizona” after the race was called for Kelly.

“This is a scam and voter fraud, no different than stuffing the ballot boxes. They stole the Electron [sic] from Blake Masters. Do Election over again!” Trump wrote on the platform.

He did not provide detailed evidence for his claims but pointed to problems with counting votes in Maricopa County, Arizona’s most populous.

Kelly has claimed victory while Masters has not conceded, with the Republican saying in a statement late Friday that there are “hundreds of thousands” of pro-Republican ballots left to count and that “we will overtake them and win.”

Kelly remained ahead of Masters by over 100,000 votes for most of Friday afternoon as mail-in ballots continued to be counted in Maricopa County, where there were Election Day problems tabulating votes.

Officials later said the problems were addressed within hours and everyone was able to vote.

Maricopa Board of Supervisors Chair Bill Gates said at the time that “No one is being disenfranchised … and none of this indicates any fraud.”

A coalition of Republicans sued to extend polling hours in Maricopa, but a judge rejected their motion, saying there was no evidence any voter was prevented from casting their vote due to the snag.

Trump said in his statement that, due to the problems in Maricopa County, “people were forced to wait for hours, then got exhausted or had other things to do and left the voting lines by the thousands.”

While Gates acknowledged some Election Day issues with vote processing, he insisted in a Nov. 11 press conference that there was “nothing wrong at all” with the overall vote.

The Associated Press made its call for Kelly at 8:14 p.m. Friday, while the Fox News Decision Desk projected shortly after 10 p.m. that the Democrat had won.

“It’s been one of the great honors of my life to serve as Arizona’s Senator,” Kelly said in a statement. “I’m humbled by the trust our state has placed in me to continue this work.”

Masters told Tucker Carlson in an interview Friday that he’s still “in a dogfight” for the Senate seat in Arizona.

“My race will be very, very close. It’s going to be decided by a few thousand votes either way,” Masters said, adding that there’s “hundreds of thousands of ballots outstanding” that have yet to be counted.

The AP said it made its call for Kelly after only a “small number of batches” of votes coming in in Maricopa showed Masters ahead, while in “nearly all other cases” the Democrat had a “slight or substantial edge.”

“That’s what led AP to call the race for Kelly after Maricopa County released another batch of 80,000 votes late Friday,” the outlet stated.

Masters alleged in his interview with Carlson that after issues on Election Day, officials directed voters to cast their votes into secure ballot boxes and that on “at least two occasions,” uncounted ballots were mixed in with counted ballots.

“So, it’s a giant disaster. It’s a giant mess to try to unmix these ballots. Right. I think the most honest thing at this point would be for Maricopa County to wipe the slate clean, just take all the ballots and do a fresh count,” Masters said.

Responding to Masters’ claims was the chairman of Maricopa County’s Board of Supervisors, Bill Gates, who told CNN that there were, indeed, two vote centers where ballots “co-mingled” but that officials have a process for sorting them out.

“In those two instances we know exactly how many people checked in at that vote center. We can then check the total number of ballots that were left there, either tabulated or in box three, and determine if they’re the same,” he continued.

“We can segregate those out and make a determination and best thing of all is that we will do this with a Republican and Democrat observers watching this to make sure everything that checks out,” he added.

The GOP groups demanded that the county require “around-the-clock shifts of ballot processing” until all of the votes are counted while threatening that they would “not hesitate to take legal action if necessary.”

Gates addressed those concerns, saying that any suggestions by the RNC of anything “untoward” in Maricopa County was “absolutely false” and “offensive.”

At a press conference on Friday, Gates insisted that “We’re doing things the right way.”

If Kelly’s projected win translates into a formal victory, this would put Democrats just one seat away from retaining control of the Senate.