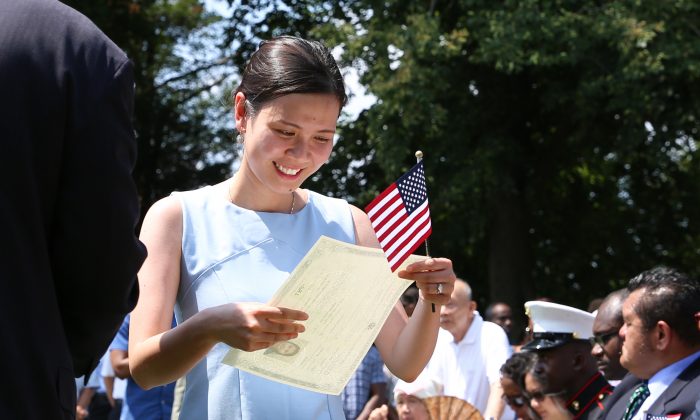 WASHINGTON—The Trump administration is proposing that immigrants be required for the first time to provide information about their social media accounts as part of the application process for U.S. citizenship and other immigration-related benefits.

“U.S. government departments and agencies involved in screening and vetting … identified the collection of social media user identifications (also known as usernames, identifiers, or ‘‘handles’’) and associated publicly available social media platforms used … during the past five years, as important for identity verification, immigration and national security vetting,” the Trump administration said in a notice published in the Federal Register Sept. 4.

The change comes out of President Donald Trump’s Executive Order 13780 dated March 6, 2017, which is best known as the second iteration of Trump’s temporary travel ban on visitors from specific terrorism-plagued countries. DHS has been collecting publicly available social media data since 2012, but until now hadn’t requested information from those submitting documents. The executive order also asked DHS to improve the screening process for visas, as well as vetting procedures used for refugee claimants.

Public comments on the proposed rule will be accepted until Nov. 4, according to DHS. A separate notice from DHS published two weeks ago stated that immigrants will be asked to include their current and past phone numbers, email addresses, and other biographical information on immigration-related forms.

Getting users’ social media handles “will assist DHS by reducing the time needed to validate the attribution of the publicly-available posted information to the applicant and prevent mis-associations,” the agency stated. “Social media may help distinguish individuals of concern from applicants whose information substantiates their eligibility for travel or an immigration benefit.”

Refusing to hand over the handle will not necessarily lead to denial of the requested benefit. U.S. Citizenship and Immigration Services, which is part of DHS, “will continue to adjudicate a form where social media information is not answered, but failure to provide the requested data may either delay or make it impossible for USCIS to determine an individual’s eligibility for the requested benefit.”

If this proposed rule takes effect, questions about social media networks will be added to nine forms used by USCIS and the U.S. Customs and Border Protection agency.

Left-leaning groups say the new information the government is seeking is intrusive and question whether it will help DHS officials do their job and keep America safe.

“This makes it much easier for them to then monitor these people,” she said, adding that it particularly affects individuals on student visas seeking permanent resident status or permanent residents who want to become U.S. citizens.

“It’s not that it’s just going to impact people overseas, it’s also going to affect people in the United States,” Patel said. “There’s a lot of information that can be gleaned from social media—not just about the individuals but all of their friends,” Patel said. “So it’s just all of us that are kind of surveilled.”

A coalition of more than two dozen activist groups, including the American Civil Liberties Union, the terrorist-linked Council on American-Islamic Relations, and the open-borders group known as the National Day Laborer Organizing Network, signed a letter opposing the proposal, which they say “would give DHS a window into applicants’ private lives.”

The individuals’ “‘online presence’ could include their reading lists, political affinities, professional activities, and private diversions. Scrutiny of their sensitive or controversial online profiles would lead many visa-waiver applicants to self-censor or delete their accounts, with consequences for personal, business, and travel-related activity.”