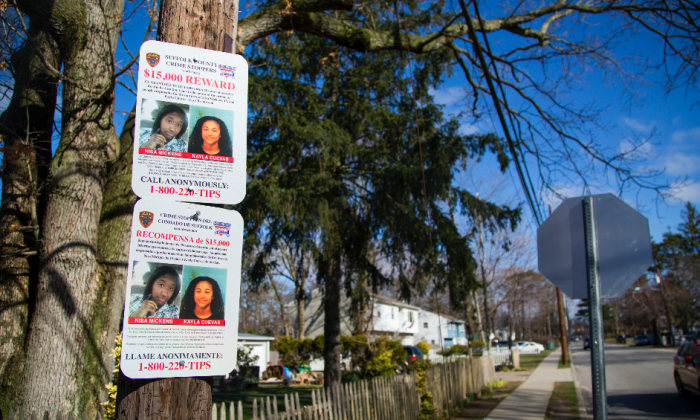 A sign offering a reward for information about the murders of Nisa Mickens and Kayla Cuevas, near Brentwood High School in Brentwood, Suffolk County, N.Y., on March 29, 2017. (Samira Bouaou/The Epoch Times)
US News

President Donald Trump and Attorney General William Barr announced on Wednesday significant developments in the administration’s efforts to eradicate the notorious MS-13 gang, including its plan to seek the death penalty of an alleged gang member in connection to the slayings of two New York teens.

Trump said his administration’s “campaign to destroy MS-13” led to the arrest and indictment of dozens of MS-13 members and its leaders. The Justice Department launched Joint Task Force Vulcan (JTFV) in August 2019 in an effort to disrupt, dismantle, and ultimately destroy the vicious gang, which has been responsible for a wide range of criminal activity across the United States such as human trafficking, drug trafficking, kidnapping, and murder.

Among the arrests include the indictment of Melgar Diaz, who became the first MS-13 member to be charged with terrorism-related offenses, officials say.

Diaz, whose indictment was unsealed on July 14, was charged with offenses including conspiring to provide material support to terrorists, conspiring to kill or maim individuals overseas, and conspiring to commit acts of terrorism transcending national boundaries.

The Trump administration also expressed its intention to seek the death penalty for Alexi Saenz, who was indicted in 2017 for allegedly committing seven murders including the 2016 murders of two teenage best friends Kayla Cuevas and Nisa Mickens. Cueva was 16 at the time, while Mickens was killed a day before her 16th birthday.

Mickens’ body was discovered with such significant trauma to the face and head that she was almost unrecognizable, according to the U.S. Attorney’s Office of the Eastern District of New York. She had been attacked with baseball bats and a machete. Meanwhile, Cuevas’s body was found the next day nearby.

“We believe the monsters who murder children should be put to death. We seem to have quite a good agreement on that. These people murder children and they do it as slowly and viciously as possible. We will not allow these animals to terrorize our communities,” Trump said.

Meanwhile, in New York and Nevada, 21 MS-13 members, including leaders of various chapters operating in the area, were arrested and charged with various offenses, including murder, kidnapping, and drug trafficking, the officials said.

MS-13, also known as Mara Salvatrucha, is one of the largest criminal organizations in the country and is widely viewed as the most violent, according to federal officials (pdf). Most of its members are concentrated in Central America, mostly in El Salvador, Honduras, and Guatemala. There are currently more than 10,000 MS-13 members operating in the United States across 40 states and Washington, and over 30,000 members worldwide.

Barr described the gang as a “death cult,” saying that its members are driven by the honor of “being the most savage, bloodthirsty person you can be and building up a reputation by killing.”

“They use the terror that they cause by their savaging to extort and they’ve gotten increasingly into human trafficking and now narcotics trafficking, but that’s a sideline, to some extent, to their basic purpose which is violence and terrorizing people,” the attorney general said.

Early in his administration, Trump vowed to eradicate MS-13, which he said had exploited the previous administrations’ weak immigration policies and lax enforcement. During his speech on Wednesday, the president said in the past three years the U.S. Immigration Customs and Enforcement (ICE) had deported over 16,000 gang members and arrested over 2,000 members of MS-13.

The attorney general told reporters that more actions against the leadership of MS-13 are expected, saying that the administration had been working very closely with counterparts in El Salvador.

MS-13 was initially formed by Salvadoran immigrants that came to the United States in order to escape the civil war in their home country, according to a study published in the Journal of Gang Research in 2009.