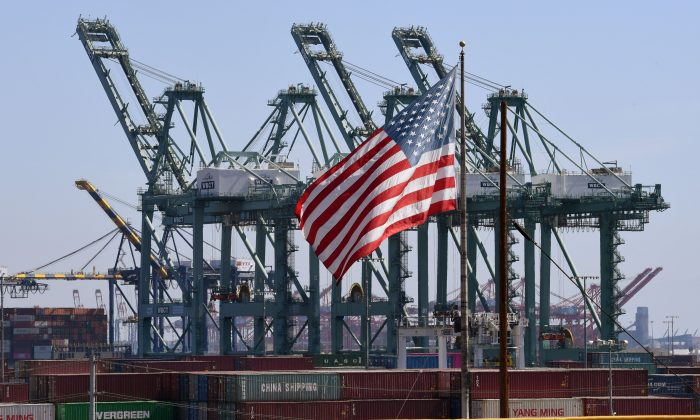 The federal government is starting to cash in on tariffs imposed by President Donald Trump on steel, aluminium, and a plethora of goods from China.

A majority—over $2.3 billion—of those monies is to be paid by steel importers. Another nearly $1.5 billion will come from tariffs on Chinese products, and over $600 million stems from aluminum imports.

The numbers come from assessments by the U.S. Customs and Border Protection and don’t necessarily reflect how much the government has already collected.

“A lot of money is coming into our coffers,” Trump commented on the issue at a Sept. 27 press conference.

Trump slapped 25 percent tariffs on steel and aluminum in the spring. He said dumping of the metals, from countries such as China, decimated domestic producers and America’s falling capability to produce its own steel created a national security risk, he argued.

The 10 percent tariff on $250 billion of Chinese goods was a retaliation against China’s rampant theft of American trade secrets, forced transfer of know-how, and other trade violations. The tariff is slated to increase to 25 percent on Jan. 1, 2019, unless the two countries can come to an agreement.

The steel tariffs have rejuvenated the American steel industry, but they have also put producers who depended on imported steel in a tough spot. U.S. companies have filed over 37,000 requests for exemption from the tariffs, forcing the Commerce Department to hire more people to handle them.

The tariffs are part of Trump’s carrot-and-stick negotiating strategy, where he mounts pressure on foreign trade partners to lower their trade barriers, but offers to ultimately move to a no-tariff, no-barrier regime on all sides.

“By the way, without tariffs, we wouldn’t be talking about a deal, just for those babies out there that keep talking about tariffs. That includes Congress,” Trump said during a press conference on the USMCA on Oct. 1.

The EU has previously agreed to move toward the no-tariff regime, outside of the auto industry.

To get a deal out of China, however, may take some time, Trump said.

“They’ve been ripping us off for so many years. It doesn’t happen that quickly. And if, politically, people force it too quickly, you’re not going to make the right deal for our workers and for our country,” Trump said.

China has imposed tariffs on $110 billion worth of American exports, but the country only imported about $130 billion of American goods last year so it doesn’t have much room to broaden the tariff base much further.

Trump, on the other hand, has ample opportunities to squeeze China even more, as the United States imported over $505 billion worth of goods from China in 2017.

Trump already warned that if China retaliates against U.S. farmers and other industries, he would impose tariffs on another $267 billion in Chinese imports.

Also, the USMCA contains a clause that bars any of its members from entering into a separate free-trade deal with China.

Canada and China had been talking about a possible free-trade deal, and formal negotiations have now been put on hold.

The tariff battle doesn’t appear to have had a notable impact on the American economy.

The unemployment rate dropped to 3.7 percent in September—the lowest level since December 1969. GDP grew an estimated 4.2 percent in the second quarter, and middle-class income is at its highest on record.

The U.S. Department of Homeland Security didn’t respond to a request for comment.