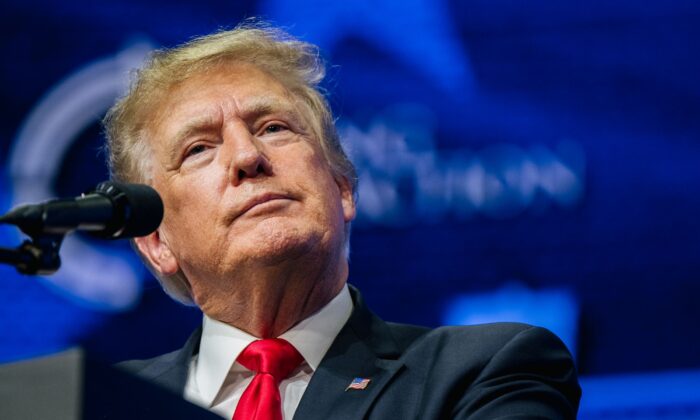 Former President Donald Trump accused legacy media outlets on Aug. 1 of continuously spreading the claim that “there is no evidence of election fraud,” noting in a statement that “in the end, truth will win.”

“The New York Times, and others, always insert a clause into their stories, ‘without evidence, that the election was decided fraudulently.’ As usual, this is fake news,” Trump said in a statement.

Trump said that there’s “massive” and “unconditional” evidence that the 2020 presidential election was “shattered with fraud and irregularities” at a level that has never been seen before in the United States.

“Much of it is already public, and a great deal more is coming out in the very near future,” he wrote.

“Every time you read a statement that there is ‘no evidence of election fraud,’ about the 2020 election scam, just attribute that statement to a crooked and collusive media (they work closely together with the radical left Democrats) that will do anything to hide the real facts of this election fiasco.”

The former president’s remarks followed a statement issued by Rep. Carolyn Maloney (D-N.Y.), chairman of the House Oversight Committee, claiming that Trump pushed senior Department of Justice (DOJ) officials in December 2020 to declare the results of the 2020 election “corrupt.”

Maloney cited July 30 handwritten notes allegedly from one of the participants in a Dec. 27 phone call between Trump and then-Acting Attorney General Jeffrey Rosen.

“These handwritten notes show that President Trump directly instructed our nation’s top law enforcement agency to take steps to overturn a free and fair election in the final days of his presidency,” Maloney said in a statement.

Trump also accused the DOJ of only being interested in “hurting” those who want to reveal how “totally dishonest” the 2020 presidential election was.

“The Justice Department should be looking at the people who rigged the election, not the patriots of our country who are seeking to find how our nation was defrauded,” he said.

His statement comes as the Arizona state Senate is set to release forensic audit findings of Maricopa County. Teams led by Florida-based Cyber Ninjas wrapped up on July 28 an audit of the nearly 2.1 million ballots cast in the Nov. 3, 2020, election. A draft report on the audit results is now being compiled.

“After seeing the irrefutable evidence from numerous states, others are talking about doing deep forensic audits,” Trump said.

“This election was a scam, and the lamestream media is doing everything in their power not to allow the people to see or read about what really took place. We no longer have a free and open media (they don’t cover the truth), but the word is getting out stronger than ever before.”

The New York Times and the Justice Department didn’t respond to requests for comment by press time.

In June, Trump also released a letter from a former federal prosecutor in Pennsylvania outlining how the attorney was allegedly pressured by former Attorney General William Barr against investigating claims of voter fraud and election irregularities in the state. Barr has denied the allegations.

Trump, during an appearance on Just the News’ “Water Cooler” in June, said he never admitted defeat in last year’s presidential election and that he has “not conceded.”