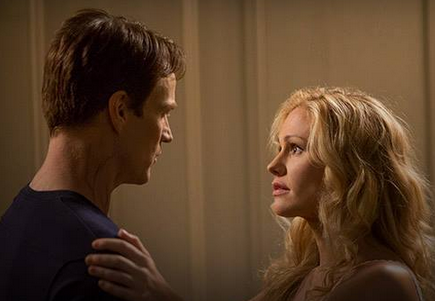 The season finale, Thank You, is slated to air on August 25.

“Sookie (Anna Paquin) weighs a future with and without Bill (Stephen Moyer). Eric (Alexander Skarsgard) and Pam (Kristin Bauer van Straten) struggle with their uncomfortable partnership with Mr. Gus (Will Yun Lee),” according to the description.

While most fans are probably aware, season 7 was announced as the final season of True Blood, so the season 7 finale will also be the series finale.

Charlaine Harries, the author of the novels on which the television series is based, told fans via Facebook earlier this year that she’ll have a cameo role in the series finale.

Moyer told TVLine in a previous interview that there was contemplation of another season but the decision was ultimately made.

“I think they made the right call to say, ‘Let’s finish it on a massive run of 10 episodes,'” he said.

“It was either going to be one season or two seasons… and I would’ve definitely [stayed] on. But it’s very difficult with a show like ours to keep finding a Big Bad and creating all the drama around it.”

Addressing the possibility of Bill and Sookie ending up together, Moyer said:

“I don’t know whether they can be, given everything that’s happened between them. What Bill did was open up something inside her that she had never had before. He was the key to a new world for her. And maybe that’s all he was supposed to be—a window into that world. I don’t think that there is a right or wrong answer. I think a bunch of people would be happy if that was the story and a bunch of people would be pissed off if that was the story. I don’t read that [expletive] so I don’t care, ultimately. All I want to do is do the show and have fun doing it.”