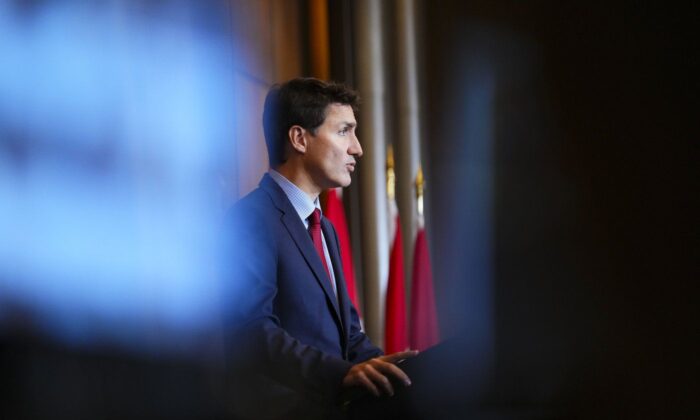 Prime Minister Justin Trudeau has condemned votes in occupied parts of Ukraine to join Russia, but gave no timeline for sanctions Canada promised a week ago.

Trudeau says the referendums are an attempt by Russia to redraw the map as it loses territory in the war it started in February.

Moscow claims people in the four regions it occupies voted upwards of 87 percent to join Russia, but western governments say the process was rigged.

Trudeau says Russia is trying to justify its war by claiming territory so that it can paint Ukraine as the aggressor.

The prime minister also phoned Ukrainian President Volodymyr Zelenskyy on Wednesday to pledge his support for the country.

Yet Trudeau had no timeline for when Canada would sanction more Russians.

“We are going to have stronger sanctions; those will be announced very soon,” Trudeau said, arguing Canada is among the countries that has sanctioned Russia the most.

Ottawa has similarly provided no details since announcing Monday that it would sanction Iranian officials for the human-rights crackdown that followed the death of Mahsa Amini, after she was arrested by the country’s morality police.

Trudeau said he promised Zelensky that Canada will do what it can to make sure the “sham referendums” aren’t endorsed by other countries.

“We’re also going to continue working with the world to recognize that what Putin is trying to do is completely illegitimate,” Trudeau told reporters Thursday afternoon.

Earlier Thursday, Defence Minister Anita Anand said Russia’s votes violate the international rules-based order that has been in place since the end of the Second World War.

“Canada condemns these actions and I personally am disgusted by them, as they are reprehensible,” she said.