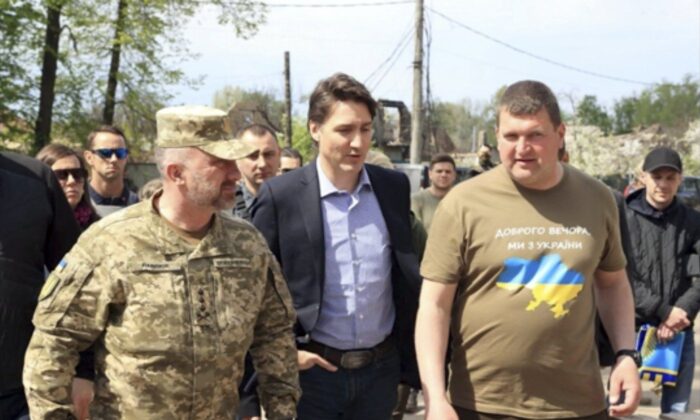 Prime Minister Justin Trudeau made an unannounced visit to Ukraine on Sunday, where he reopened the Canadian Embassy in Kyiv.

Trudeau is also scheduled to meet President Volodymyr Zelenskyy in person for the first time since Russia began its invasion.

“The prime minister is in Ukraine to meet with President Zelenskyy and reaffirm Canada’s unwavering support for the Ukrainian people,” Cameron Ahmad, a spokesman for Trudeau, said in a written statement Sunday.

Canada began scaling down its diplomatic presence in Ukraine in late January as intelligence warned of an impending Russian invasion.

Representatives from most western countries fled Ukraine as the war erupted, but more than two dozen have already gone back, even as the conflict drags on.

Several of Canada’s G7 allies have already returned to Kyiv — France and Italy the third week of April, and the United Kingdom as of last week.

On Sunday, Trudeau, Freeland and Joly arrived at the embassy in Kyiv with a heavily armed security detail.

Larisa Galadza, who is Canada’s ambassador to Ukraine, joined them in a flag-raising ceremony. They ended up raising the flag at the side of the building after the first flagpole chosen turned out to be broken.

The Canadian Press was made aware of Trudeau’s trip on the condition it not be reported until it was made public, for security reasons.

The Associated Press reported that Jill Biden made a surprise visit to the western part of Ukraine today to meet Olena Zelenska, the first lady, for Mother’s Day.

The public itinerary for Trudeau posted Saturday suggested he would be in the National Capital Region Sunday and taking part in a meeting of G7 leaders on the situation in Ukraine.

The visit is taking place as dozens of Ukrainians are feared dead after a Russian bomb destroyed a school sheltering about 90 people in eastern Ukraine.

The governor of Luhansk province said Sunday that 30 people were rescued from the rubble of the school in the village of Bilohorivka but the rest probably didn’t survive.

Ukrainian soldiers making a last stand at a steel mill in the besieged city of Mariupol said they wouldn’t surrender following the evacuation of civilians from the sprawling site.