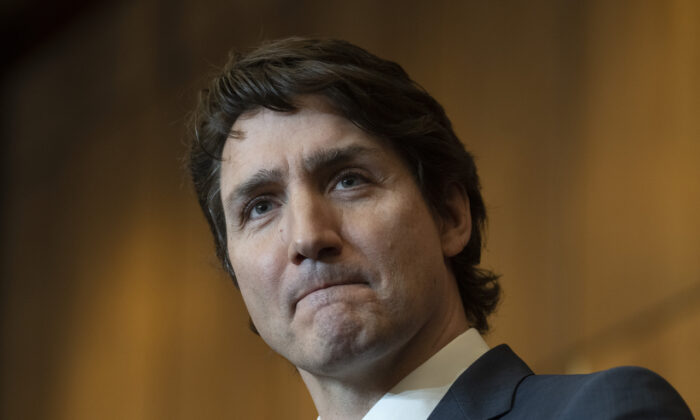 Prime Minister Justin Trudeau listens to a question during a news conference on Feb. 21, 2022, in Ottawa. THE CANADIAN PRESS/Adrian Wyld
Canada

Canadian Prime Minister Justin Trudeau said the federal government will continue pursuing the Emergencies Act, even though the protesters have now largely been cleared from downtown Ottawa, and the blockades at several Canada–U.S. border crossings were cleared and had been reopened since before the act was invoked.

At a press conference on Feb. 21, Trudeau used pointed language concerning the protesters opposed to federal COVID-19 mandates who had camped in downtown Ottawa over the past three weeks.

More than once, he referenced “misinformation and disinformation” in society when discussing justification for his use of the act.

“We didn’t want to use the Emergencies Act,” Trudeau said.

“But after weeks of dangerous and unlawful activities; after weeks of people being harassed in their neighborhoods and small businesses forced to close; after billions of dollars were stalled in trade, putting people’s jobs and livelihoods at risk; after the National War Memorial was desecrated; after evidence of increased ideologically motivated violent extremism activity across the country; after a flood of misinformation and disinformation washed over Canada, including from foreign sources; after these illegal blockades and occupations received disturbing amounts of foreign funding to destabilize Canada’s democracy—it became clear that local and provincial authorities needed more tools to restore order and keep people safe.”

Debate on the use of the act, which gives authorities additional powers to oust those participating in the Ottawa protests against COVID-19 mandates and restrictions, has been underway in the House of Commons over the past few days. The NDP supports the government’s use of the measure, while the Conservatives and Bloc Quebecois oppose its use.

Conservative interim leader Candice Bergen said in a Twitter post on Feb. 20 that Trudeau and the NDP are making “a dangerous mistake” by enacting the Emergencies Act, and that “the rights and freedoms of Canadians must be defended at every turn.”

The rights and freedoms of Canadians must be defended at every turn. The Prime Minister with the help of the NDP are making a dangerous mistake by enacting the Emergencies Act. pic.twitter.com/y3RMuQdP4b

Alberta Premier Jason Kenney said he will be filing a court challenge against the Liberal government’s invocation of the act, saying it’s unnecessary, disproportionate, and an intrusion into provincial jurisdiction.

When asked why the measure is still necessary now that the police have cleared the demonstrators from Ottawa’s downtown core and reopened the border crossings, Trudeau said the state of emergency isn’t yet over.

“Even though the blockades are lifted across border openings right now, even though things seem to be resolving very well in Ottawa, this state of emergency is not over. There continues to be real concerns about the coming days. But we will continue to evaluate every single day whether or not it is time and we are able to lift the state of emergency,” he said.

Trudeau called on MPs, who will be voting on the use of the Emergencies Act on Feb. 21, to support the measure.

When asked if he will impose a party line for the vote, Trudeau said anyone who doesn’t vote in favour of the move doesn’t have confidence in “the competency of the government.”

On Feb. 14, the Liberal government invoked the act to give authorities sweeping additional powers to oust the protesters encamped in Ottawa’s downtown core, including the ability to compel towing companies to remove trucks parked in the city’s downtown core.

Several financial measures were also brought in to reduce funding for the protests, such as the broadening of anti-money laundering regulations to encompass crowdfunding platforms and digital currencies. Banks can also freeze accounts of individuals and corporations involved in the protests without a court order.

Some 206 financial assets—including bank and corporate accounts—have been frozen, and information on 56 entities associated with vehicles, individuals, and companies have been disclosed, Mike Duheme, deputy commissioner of federal policing for the RCMP, said at a press conference on Feb. 20.

While Trudeau said he didn’t want to keep the emergency measures in place “a single day longer than necessary,” he previously said he will introduce bills to make some of the measures permanent, such as requiring crowdfunding platforms to register with the Financial Transactions and Reports Analysis Centre of Canada.

He reiterated that point on Feb. 21.

“There needs to be a reflection about misinformation and disinformation, and how Canadians lives can be disrupted by them. There needs to be a reflection on foreign funding of illegal actions in our country designed to disrupt or destabilize our democracy. There have to be reflections on our ability to keep our borders open and free-flowing and protect critical infrastructure like the seat of our democracy,” Trudeau said.

“These are things that will be debated and reflected on in time. We will work with parliamentarians to move forward in a way that is responsible and properly measured to react and be proactive in terms of what we see potentially coming in the coming years.”

Protest organizers and supporters reject Trudeau’s characterization of the Freedom Convoy movement, which began with truck drivers opposed to the federal government’s requirement for drivers crossing the U.S.–Canada border to have COVID-19 vaccination.

“Peaceful protesters who feed the homeless, shovel snow, pick up garbage, dance in the streets, play street hockey, wave Canadian flags, sing the national anthem and set up bouncy castles for children do not ‘seriously endanger the lives, health or safety of Canadians,’ nor are these peaceful activities ‘of such proportions or nature as to exceed the capacity or authority of a province to deal with it,’” Jay Cameron, litigation director at the legal group Justice Centre for Constitutional Freedoms, which has provided legal support to protest organizers, said in a statement.

On Feb. 17, following Trudeau’s invocation of the act, Bergen said in the House of Commons that “he has failed to meet the high threshold set out by the Emergencies Act to justify it.”

That threshold requires a situation that “seriously threatens the ability of the Government of Canada to preserve the sovereignty, security, and territorial integrity of Canada,” she said, and one that “cannot be effectively dealt with under any other law of [the country].”

Bergen pointed out that the act’s predecessor, the War Measures Act, “was only used three times: World War I, World War II, and the FLQ crisis.” The latter refers to a long series of terrorist attacks—including bombings and robberies between 1963 and 1970 that left six people dead—by the Front de libération du Québec (FLQ), a militant Quebec independence movement.

Civil liberties and constitutional rights groups have also launched legal challenges against the government’s use of the Emergencies Act in the face of the protests.