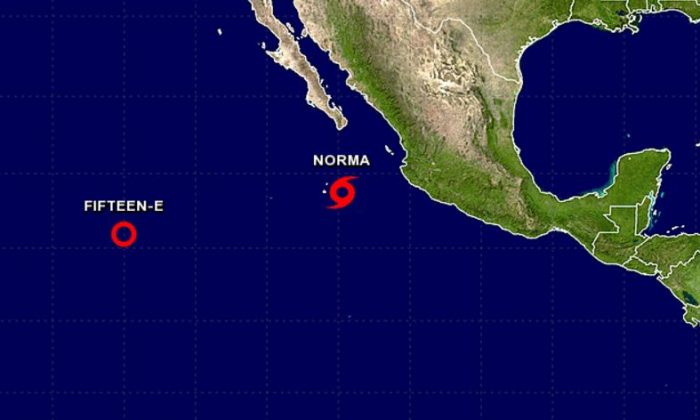 Tropical Storm Norma is churning in the eastern Pacific Ocean hundreds of miles west of the Mexican coast.

Norma, the U.S. National Hurricane Center warned Friday, Sept. 15, is strengthening and is “forecast to become a major hurricane by” Friday night.

The storm is 85 miles east of Socorro Island, 290 miles south of Cabo San Lucas, Mexico. It has winds of 65, just shy of hurricane-force winds, according to the NHC.

Currently, “There are no coastal watches or warnings in effect,” the agency stated.

“Interests in Baja California Sur should monitor the progress of Norma. A Tropical Storm Watch could be required later today for portions of the peninsula,” it added.

According to The Weather Channel, Norma is presently “over very warm waters and should remain in an area of low wind shear into this weekend. Therefore, strengthening is expected and Norma may become a hurricane as early as Friday night.”

The update comes a day after Hurricane Max hit southwestern Mexico on Thursday night, Sept. 14, before it was downgraded to a tropical storm.

The storm is expected to continue to weaken dramatically as it moves inland over Southern Mexico, Reuters reported.

Max hit a week after a powerful magnitude-8.1 quake shook southern Mexico, destroying thousands of buildings in the state of Oaxaca and killing at least 98 people nationwide.