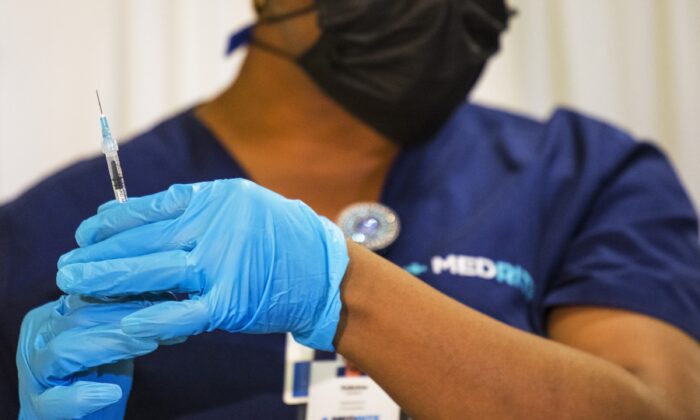 Trio of New Studies Revives Question: Should Children Get a COVID-19 Vaccine?

Three newly published studies have revived concerns about COVID-19 vaccines for young children, many of whom are at little risk of contracting serious cases of the illness.

Youth under 18 are the least likely age group to need hospital care after getting COVID-19 but Pfizer’s COVID-19 vaccine was authorized in 2020 for those 16 and older and the authorization was expanded in 2021 to children as young as 5. At the time of the regulatory actions, officials said children should get vaccinated because the jab was highly effective at preventing COVID-19 infection and would likely help curb severe cases among those who still got the disease.

That may no longer be the case, according to the new studies.

Researchers with the New York State Department of Health found that effectiveness against infection “declined rapidly” for children, hitting approximately 50 percent in January. Research published by the Centers for Disease Control and Prevention (CDC) showed a similar drop. And researchers in the United Kingdom pegged the effectiveness among all age groups for the Pfizer jab declining to just 8.8 percent after 25 or more weeks.

The protection against severe disease also diminished, going below 50 percent in New York and 51 percent in the CDC study for those under 12.

The diminished protection means the benefits of the shot are getting closer to the risks, which include an elevated chance of experiencing heart inflammation, Dr. Cody Meissner, a member of the advisory panel that recommended authorization of the vaccine for kids, told The Epoch Times.

Taken together, the studies suggest “the benefit roughly equals the risk of harm” for many children, Meissner said.

Some other experts disagree, including Dr. Chandy John, an immunologist at Indiana University School of Medicine.

“As parents are considering vaccination, the results that show some evidence of protection against hospitalization are enough to convince me that vaccination in this age group is still appropriate with the current vaccine,” John told The Epoch Times via email.

Health authorities thus advised virtually all Americans 12 or older to get a booster shot after the vaccines began performing worse against the Delta variant of the virus that causes COVID-19—known as SARS-CoV-2 or the CCP (Chinese Communist Party) virus—than earlier variants.

Omicron displaced Delta in the United States and many other countries in late 2021, and has proven better able to evade the shielding from the vaccines, especially the protection against infection.

“You’re looking at the diminution of efficacy or effectiveness,” Dr. Anthony Fauci, the chief medical adviser to President Joe Biden, told reporters in a recent briefing as he highlighted data showing the decline.

The data analyzed for authorization of the shot for children 5 to 11, from Pfizer’s ongoing clinical trial, came before Omicron appeared.

At the time, in November 2021, Pfizer and the Food and Drug Administration (FDA) said the vaccine was nearly 91 percent effective against infection among the young children.

Both the FDA and the World Health Organization say vaccines are only cleared if they have an effectiveness of 50 percent or higher.

The FDA recently altered the authorization for several monoclonal antibodies that studies suggested didn’t perform well against Omicron, and postponed a decision on Pfizer’s vaccine for some of the youngest U.S. children, but are so far refusing to change the clearance for Pfizer’s shot.

“FDA has full confidence in the data that were used to support emergency use authorization of the Pfizer-BioNTech COVID-19 Vaccine in children 5 through 11 years of age and in the safety and effectiveness of the vaccine in preventing severe consequences from COVID-19, including hospitalization and death,” an FDA spokeswoman told The Epoch Times in an email. “The agency continues to work closely with the company as they accumulate additional data from their ongoing clinical trial, including on the potential need for an additional dose in children.”

The FDA authorized the jab for those 5 to 11 after its FDA’s vaccine advisory panel voted 14–0 to recommend the authorization, but the vote came after an hourslong meeting during which multiple members, including Meissner, voiced concerns, including about the small dataset.

The efficacy data was for a pool of 2,250 children, about two-thirds of whom received the jab. The efficacy was inferred based on a technique called immunobridging, or comparing the immune responses among the children to those seen in a portion of older recipients. Efficacy of the vaccine against severe disease couldn’t be determined because none of the participants, including the unvaccinated, contracted severe cases of COVID-19.

“The idea of doing it under an emergency use authorization, two-dose for everybody, without any flexibility around this, I think is going to just not go over very well,” Dr. Michael Kurilla with the National Institutes of Health, who ended up abstaining from the vote, said during the meeting.

“There are high risk individuals and I think they do need to be attended to, that we do need to provide a vaccine for them, but for many others, one dose or no dose even if they’ve had prior COVID infection, I think they may not need anything more,” Kurilla said.

“It’s not even clear that this vaccine will reduce rates of transmission,” Meissner added at the time. “This vaccine is probably not going to prevent infection,” he added.

After FDA officials refused to allow the panel to recommend authorization for certain groups only, such as kids with weak immune systems, advisers approved the recommendation, telling the FDA to authorize the jab for every 5- to 11-year-old who doesn’t have an allergy to a component of the vaccine.

“It is pretty clear to me that the benefits do outweigh the risk,” said Dr. Amanda Cohn, a CDC official who sits on the panel. “To me the question is pretty clear: We don’t want children to be dying from COVID, even if it is far fewer children than adults, and we don’t want them in the ICU.”

Children at Little Risk From COVID-19

Children are far less likely than other age groups to need hospital care for or die from COVID-19.

Out of 1.9 million COVID-19 cases among children 5 to 11 as of October 2021, just about 8,300 resulted in hospitalization, and approximately 20 percent of those were for non-COVID reasons, according to the CDC.

In the age group, just 94 children had died from COVID-19, according to data reported to the CDC. Over 98 percent of the overall deaths in that group were from other causes.

Updated statistics show kids under 18 have accounted for 1 percent of hospitalizations with COVID-19 and made up 1.1 percent of the COVID-19 deaths in the United States.

“Fortunately, these most severe outcomes are generally rare. The chance that a child will have severe COVID, require hospitalization, or develop a long-term complication … remain low, but still the risk is too high and too devastating for our children, and far higher for many other diseases for which we vaccinate children,” CDC Director Rochelle Walensky said in November 2021.

Walensky said parents should still get their children vaccinated with Pfizer’s vaccine because it “can help protect them against COVID-19, as well as reduce disruptions to in-person learning and activities by helping curb community transmission.”

The CDC didn’t respond to a request for comment on the new studies.

Parents have been reluctant to vaccine their children, with just 22 percent of kids 5 to 11 having been fully vaccinated as of Feb. 2, according to the Kaiser Family Foundation. About a third of parents surveyed by the group said they would not get their child vaccinated, or would only do so if it were required, while another fifth said they were going to wait for now.

Children 5 to 11 receive a smaller dosage level that’s one-third the amount given to Americans 12 and older. They’re also not yet able to get a booster.

The New York study found 12-year-olds were much better protected versus 11-year-olds, and some experts said the new data underlines a need to boost younger children and increase the dosage of the primary series, which consists of two shots spaced several weeks apart.

“I think it is likely that children with this vaccination will need a third dose, but this is not different from adults, in whom a third dose was required to provide strong protection against Omicron infection and severe disease,” John, the immunologist, said.

Dr. Jeffrey Klausner, a professor at the University of Southern California, said getting the vaccines out quickly “was important and saved millions of lives” but that the studies reinforce that “the full effectiveness of COVID-19 vaccination is seen with a 3-dose series.”

“We still need to do a better job of making sure every person age 65 years and older is completely vaccinated and up-to-date with a booster. The greatest number of preventable deaths have been in the elderly. Focusing our efforts on children is misplaced,” Klausner, a former CDC employee, told The Epoch Times in an email.

Some said the lack of long-term safety data, coupled with the low risk among children and the declining vaccine efficacy, should give parents pause when considering whether to vaccinate their child.

“We don’t know potential long term harms or even some of the short term that we’re seeing reported in VAERS,” Kim Witczak, co-founder and executive director of the drug safety group Woodymatters, told The Epoch Times, referring to the Vaccine Adverse Event Reporting System.

“It only protects you for a certain amount of time,” added Witzcak, who sits on another FDA advisory panel. “I think that’s something that the public needs before they make that decision, instead of being told it’s completely safe and effective, which is what we’ve heard for now over a year.”

“It really should be up to the parents decide whether they want to immunize their child, and I think they need to be informed, they need to educate themselves that yes, there may be some benefit, it may reduce the risk of death, but the risk of death is so small, it’s almost negligible,” said Meissner, who heads Tufts University School of Medicine’s Division of Pediatric Infectious Disease. “But if a parent feels better if their child is vaccinated, I think they certainly should have access to the vaccine, and that’s why I voted for the age group, and also for children that have risk factors.”

The authors of the New York study and the CDC study declined requests for comment. The corresponding author for the third study didn’t return an inquiry, nor did Pfizer.