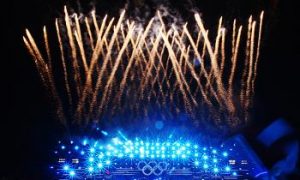 Tribal Water Wars Could Be Looming for Africa

For many tribes and communities in Africa, Earth Day on April 22, is not a special time to think about green acts and water conservation; it is a day like the rest—a struggle to find enough water for their crops, livestock, and families. And that struggle can turn into a battle, as tribes that have lived in peace along riverbanks of Eastern Africa for generations are turning into enemies over access to water.

Farmers and herdsmen with their cattle now need to cross longer distances in search of the precious resource, often infringing on other’s traditional lands. Hence, conflicts break out, some ending in bloodshed.

According to the documentary “When the Water Ends” by the American photographer Evan Abramson published online last January, 8 million semi-nomadic people in southern Ethiopia and northern Kenya survive by following water resources. For thousands of years their ancestors have roamed the grazing lands that stretch across 80 percent of Kenya and 60 percent of Ethiopia. Now, if they continue following their original lifestyle, it could cost them their lives.

Each year, at least 15 tribe members are killed in armed conflicts over water, Makambo Lotorobo, field officer at the Friends of Lake Turkana, an environmental grass-roots organization in Kenya, wrote via e-mail.

According to Lotorobo, conflicts in Kenya spark mostly between the tribes of Turkana, Samburu, Rendille, Gabra, Dassanatch, Ammarkoke, and Toposa. He recollects an incident where warriors from the Rendille community were watering their animals at a well in Gas village during a severe drought.

“The village is inhabited by the Gabra community, and it happened that they came to try and confront the Rendilles demanding [an] explanation why they are using the well, which doesn’t belong to them. This resulted in a shootout.”

In the end, the local administration had to intervene by establishing peace talks facilitated by a council of elders from the local community in order to save the situation.

More often, people are left to their own devices to secure the life-sustaining resource.

“Since security is crucial for the nomadic people and the government is unable to ensure it, they are forced to buy their own arms for self defense and protection of their livestock,” wrote Lotorobo.

Lake Turkana is a major stage in the story of African water conflicts. Ninety percent of its waters come from the Omo River and more than 500,000 tribesmen in Ethiopia and 300,000 in Kenya depend on it for cultivation, grazing, and fishing, according to Abramson’s documentary.

For the last 40 years, the lake has been shrinking due to rising temperatures in the region. Lake waters have receded so much that the water now sits only on the Kenyan side of the border. Making matters worse, the Ethiopian government is building a dam on the upper Omo River.

A group called Friends of Lake Turkana is at the frontlines trying to stop the project, although it is currently suspended due to a lack of funding.

“The dam will have a catastrophic impact on the fragile ecosystem of the Turkana basin,” according to Lotorobo. “It will reduce the Omo River flow into Lake Turkana causing the lake level to reduce by 10 meters [32.8 feet].”

The environmentalist points to yet another grave consequence: If the dam is built, the lake’s salinity will increase making the water undrinkable, which will also harm the local fish industry. Conflicts will surely ensue.

“The local community will not sit back and perish knowing that there are other territories where life can be easier, therefore their last resort will always be fighting for their survival,” says Lotorobo.

Critics say official policies and programs in Kenya and Ethiopia are exacerbating the water conflict, instead of finding solutions.

“Pastoralists have been encouraged by government policies or well-meaning NGOs to raise nontraditional breeds of cattle … because they produce more meat and milk. But these animals are not well adapted to [a] lack of water, high temperatures, or to some of the diseases in Africa. They are not able to walk that far for water,” said Danielle Nierenberg from Nourishing the Planet, a project of the Worldwatch Environmental Institute.

Nierenberg says that herders are often considered backward and that a lot of African nations, including South Africa where she is, are trying to push agriculture into the modern era by promoting land ownership versus nomadic grazing, among other things.

According to Nierenberg, in the long term this attitude toward cattle breeders, combined with the increasing scarcity of natural resources, might lead not only to economic conflicts, but also to large-scale social protests.

“If African nations don’t find a way to figure out and solve the water crisis, we will see more unrest, not only in Sub-Saharan Africa but all over the world.”
Read More…The Water Crisis in Africa