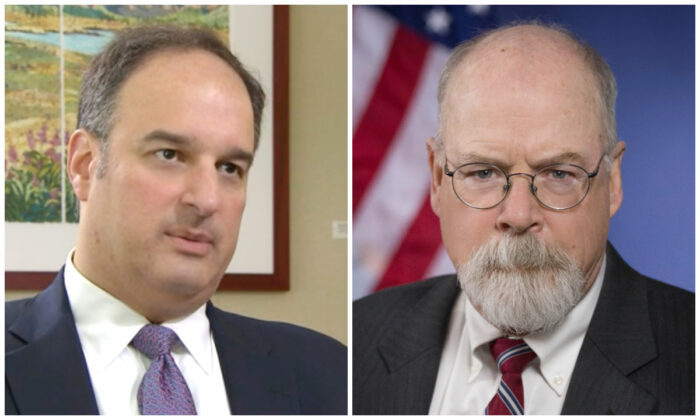 Trial Opens for Ex-Clinton Lawyer Being Investigated by John Durham

The first trial connected to special counsel John Durham’s investigation into the discredited Trump–Russia collusion narrative is slated to start on May 16, as former Hillary Clinton campaign attorney Michael Sussmann faces charges that he lied to the FBI in 2016.

Sussmann is accused of misrepresenting who he was working for—Clinton’s campaign and the Democratic National Committee—when he spoke to then-FBI General Counsel James Baker, telling Baker that he wasn’t working on behalf of any client when he provided information to the FBI suggesting that there was a secret backchannel between a Russian bank and The Trump Organization. Sussmann has pleaded not guilty, while his attorneys have said in court filings that Durham’s probe is politically motivated.

Obama-appointed Judge Christopher Cooper will preside over Sussmann’s trial in the U.S. District Court for the District of Columbia. The trial starts at 9 a.m. ET.

The claim that there was a secret Russian backchannel—and many other allegations that sought to tie former President Donald Trump to Moscow in 2016 and 2017—have been debunked by the FBI, CIA, and during a congressional investigation. Trump has categorically denied those allegations and said they were part of an ongoing attempt by Democrats and many legacy media outlets to discredit him.

In court filings, Durham’s team said that Sussmann, a former federal prosecutor, was working on behalf of the 2016 Clinton campaign and technology executive Rodney Joffe. The prosecutor said Sussman was billing both the Clinton campaign and the Democratic National Committee as he made false statements to the FBI, including via text messages.

In February, Sussmann, who worked for high-powered Washington law firm Perkins Coie, attempted to have the case dismissed. Cooper denied that request in April.

“Evidence will show that as a result of these conversations and during this same time period, [Joffe] did exactly that: he tasked employees from multiple Internet companies and a university working under a pending national security contract to mine and gather vast amounts of internet metadata in order to support an ‘inference’ and ‘narrative'” that would tie Trump to Russia, Durham wrote in trial subpoenas in April.

More than a week ago, Cooper issued a ruling that limited the evidence that Durham may present during the trial.

“The Court will exercise its discretion not to engage in the kind of extensive evidentiary analysis that would be required to find that such a joint venture existed, and who may have joined it, in order to admit these emails,” Cooper wrote in a court filing on May 14.

By releasing more documents and compelling testimony, it would be tantamount to conducting “a time-consuming and largely unnecessary mini-trial to determine the existence and scope of an uncharged conspiracy to develop and disseminate the Alfa Bank data,” the judge wrote. Durham’s team “can effectively pursue its case without the marginal information such an inquiry might yield about Mr. Sussmann’s motives and client relationships.”

“For starters, Mr. Sussmann is not charged with a conspiracy,” Cooper wrote. “Moreover, while the Special Counsel has proffered some evidence of a collective effort to disseminate the purported link between Trump and Alfa Bank to the press and others, the contours of this venture and its participants are not entirely obvious.”

However, days before that, Cooper granted Durham’s motion to compel production of unredacted versions of said documents from the Perkins Coie, Joffee, and opposition firm Fusion GPS, along with the Clinton campaign and Democratic National Committee.

Other than Sussmann, Durham has also charged a Russia analyst, Igor Danchenko, with lying to the FBI. Danchenko has also pleaded not guilty.

Thus far, Durham has netted one conviction in his wide-reaching investigation: former FBI attorney Kevin Clinesmith, who was charged with altering a Trump–Russia probe email. In early 2021, a judge spared Clinesmith prison time after an initial sentence of one year in jail.