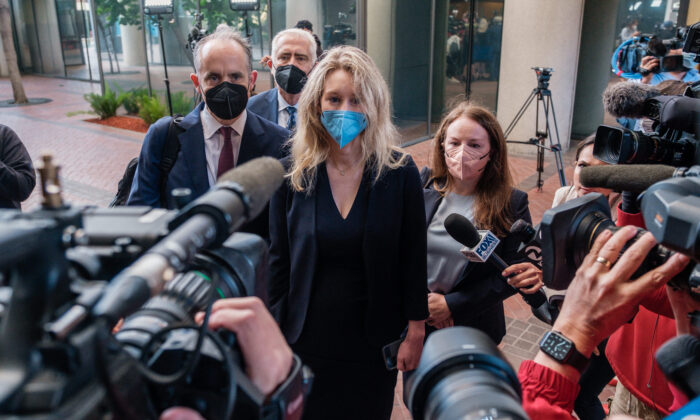 Prosecutors and defense lawyers are scheduled to deliver their opening statements on Sept. 8 in the trial of Elizabeth Holmes, the founder of medical sciences company, Theranos Inc.

Holmes, who founded Theranos in 2003 at the age of 19, is facing counts of wire fraud and conspiracy to commit wire fraud relating to her blood-testing startup that was once valued at $9 billion.

Holmes, 37, and her co-defendant, former romantic partner Ramesh Balwani, are accused of perpetrating a scheme that defrauded investors of millions of dollars as they claimed Theranos’s blood-testing laboratory services were revolutionary and readily available, which would effectively eliminate the way we currently administer blood tests now.

The revolutionary services attracted multiple investors including media entrepreneur Rupert Murdoch, the family of former U.S. Education Secretary Betsy Devos, and the Walton family behind Walmart, despite Holmes and Balwani knowing that Theranos could not consistently produce accurate and reliable results for some blood tests.

A 12-member jury in San Jose, California, is set to hear opening arguments in the trial on Wednesday, which is being presided over by U.S. District Judge Edward Davila, starting with the prosecution.

Holmes has pleaded not guilty to 10 counts of wire fraud and two counts of conspiracy. In court filings, Holmes’s attorneys have argued there is a missing link between what Holmes herself knew and what Theranos employees told doctors and regulators about the company’s technology.

For the most serious charge of wire fraud, prosecutors will have to prove the Theranos founder acted with intent to defraud customers and investors. To be convicted, the jury of 12 must unanimously find her guilty beyond a reasonable doubt that she acted with intent.

If convicted, she faces up to 20 years in prison and a fine of $250,000, and she may have to pay restitution for each count.

Former Theranos executive Balwani, who is scheduled to be tried separately, has also pleaded not guilty.

Prosecutors allege that Holmes and Balwani defrauded investors over the course of five years between 2010 and 2015 and deceived patients when the company began making its tests commercially available. This includes via a partnership with the Walgreens drugstore chain.

Along with a lack of transparency regarding the accuracy of the blood tests, prosecutors claim Holmes told the company’s private investors several lies, including that Theranos did not need approval from the U.S. Food and Drug Administration for its devices.

The Wall Street Journal in 2015 reported that the Theranos devices were flawed and inaccurate.

Holmes has maintained her innocence since she was charged in 2018.

Holmes’s attorneys have said in court papers that she is “highly likely” to take the witness stand during the trial and testify that her relationship with Balwani affected her mental state. Defendants rarely take the stand in their own trials and the move could potentially prove risky.

She told a psychologist that Balwani was controlling, “monitoring her calls, text messages, and emails; physical violence, such as throwing hard, sharp objects at her; restricting her sleep,” according to a filing from February 2020 by Balwani’s lawyers.

Balwani has denied the allegations.

Holmes’s trial was previously delayed by the COVID-19 pandemic and again in July when she gave birth to her first child.

The new trial is expected to last more than two months.