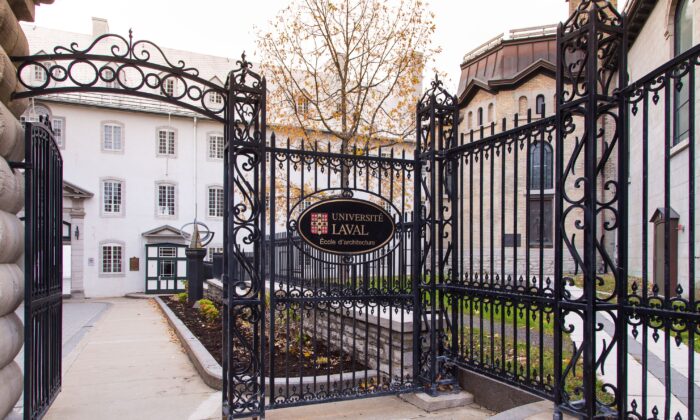 An entrance at Laval University in Quebec in a file photo. (Anne Richard/Shutterstock)
Canada

Two Quebec academics say they are concerned about the censure and censorship of professors in the province who questioned government responses to the pandemic, including the vaccination of children.

In a June 22 Quebecor Media article, Patrick Provost, a full professor in the department of microbiology and immunology at Laval University, questioned whether it was right to impose vaccine passports and mandates and “muzzle the professionals and academics who criticized the health measures.”

The next day, Quebecor removed the article from its platforms.

In mid-June, Laval suspended Provost for eight weeks without pay for saying in December 2021 that the risks of vaccinating children for COVID-19 outweighed the benefits. The university then gave an equally long suspension to a second professor, Nicolas Derome, in the faculty of science and engineering’s biology department, for his own public comments questioning the COVID-19 response.

Douglas Farrow, a professor of theology and ethics at McGill University in Montreal, called the Laval suspensions “A Repressive Political Act” in a Substack article he penned on June 30.

“Université Laval has resorted to professional violence to prop up Quebec’s crumbling Covid narrative,” Farrow wrote. “A secondary casualty of the violence is the principle of academic freedom.”

In an interview with The Epoch Times, Farrow characterized the sanctions as only one manifestation of a larger project to censor minority opinions on the pandemic and the responses to it.

“There is major pressure being applied to prevent the public from hearing reasoned arguments about these things, and it doesn’t actually matter whether the argument is statistical, or whether it’s medical and scientific, or whether it’s political,” he said.

“Patrick [Provost] is the kind of person who could do it on the medical scientific front; he can also do it on the statistical front and he can do it on the common-sense, political front. But obviously they don’t want people to hear any of that, and so they’ve taken action against him.”

In March 2020, the Quebec government created a committee on academic freedom in response to reports that professors had stopped teaching controversial subjects in order to avoid offending students. In all, 1,079 professors and 992 students participated in a survey in which 60 percent of the professors said they had engaged in self-censorship and 82 percent of those professors wanted all restrictions lifted on what they could say in class.

The committee’s report, tabled in December 2021, determined that university classrooms should not be safe spaces and that they should not require warnings if classes might include offensive or materials. The Quebec government adopted all of the committee’s recommendations in Bill 32, which passed in early June.

When the bill was introduced, Higher Education Minister Danielle McCann gave schools one year to come into compliance. In an email to The Epoch Times, McCann said Provost’s suspension demonstrates the relevance of the legislation.

“Those situations at Laval University confirm that it was necessary to legislate on this issue,” she said. “The law also emphasizes that academic freedom must be practiced in conformity with norms of scientific rigour.”

Farrow finds it remarkable that the university took such actions against the two professors, Provost and Derome, despite the law.

“They’ve decided to proceed regardless of this new law, regardless of common sense, regardless of the tradition in the universities. And every university professor in any discipline who sees this happening … should be very concerned that this kind of action is deemed acceptable by the administration of a major university,” he said.

“This is an attempt to say to all the other universities and professors, ‘Don’t do what he did, or we’ll get you.’”

When contacted by The Epoch Times, Laval said it “does not comment on the personal situation of its employees.”

Laval’s faculty union said in late June that it has filed a grievance over Provost’s suspension, adding that it was worried that the university’s actions “could have a chilling effect on other professors who share controversial views.”

David Robinson, executive director of the Canadian Association of University Teachers, has said professors should be disciplined only for comments that demonstrate incompetence or violate legal limits to speech, such as libel laws.

Farrow said he believes that the professors have a strong case and that a victory would set a positive precedent. However, he is concerned that many professors, students, and Canadians aren’t speaking out.

“If the people are not prepared to stand up against practices, government directives, and eventually laws that limit their liberties and freedoms improperly, then the courts will not be able to save Patrick Provost or anybody else. Right now, I think they still can and I’m hoping some of them at least will,” he said.

“But underneath it all for me, the question that is most burning is why … so few of them [professors] will stand up, even when a colleague is so mistreated. … If the majority of the profs won’t stand up and resist this in the university, I don’t know that there’s any hope for the universities.”

“Scholars should be totally free to ask any of these questions and pursue them wherever their thoughts and findings may lead. The idea that it could be not only censorship by the media, but that academic institutions are going to apply punishments to their permanent full-time faculty for asking these questions—it’s truly astonishing to me, I’m beside myself.”

“And that’s where Canada is,” he adds. “That’s not the Canada that I know and love. That’s not the kind of behaviour I would expect from universities in a country like ours.”

Smith says professors often engage in self-censorship because they and their institutions are increasingly beholden to corporate interests as they chase research dollars. He says scholars who don’t ask questions aren’t doing their job, nor are media who do not allow such questions to be asked.

“I am shocked because that should not happen. It speaks to something in the state of the media in this country that that happens that’s deeply concerning, that’s connected to all kinds of concerns we have about the media being subsidized by the government and speaking in unison and one voice across the country,” Smith said.

“They allowed for some dissent and they quickly realized that they shouldn’t allow for any dissent. And that’s not good journalism. That’s not the kind of journalism we count on in a free country.”

Noé Chartier and The Canadian Press contributed to this report.