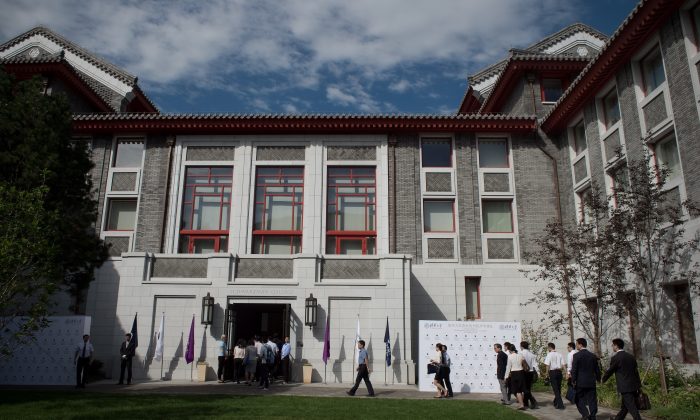 A general view of the front entrance of the Schwarzman College at Tsinghua University in Beijing on Sept. 10, 2016. A U.S. billionaire's giant gift to one of China's top universities for a program echoing Oxford's Rhodes Scholarships comes as the country seeks to boost its schools' prestige while tightening ideological control in classrooms. (Nicolas Asfouri/AFP/Getty Images)
Thinking About China

A former lecturer of Peking University, Chai Xiaoming, has been under house arrest after the state security police of Nanjing accused him of subverting state power since March 21. Recently, another well-known scholar and professor of law at Tsinghua University, Xu Zhangrun, was suspended from the school and currently under investigation. The main reason is that since July 2018, Xu Zhangrun has published three articles in the name of speaking up for freedom to criticize the Chinese Communist Party’s (CCP) totalitarian regime and caused great repercussions in Chinese society. In one of the articles, he called on the CCP to redress the June 4th Incident (Tiananmen Square Massacre in 1989), and make the salary of public officials transparent, among others, during two important government meetings this year—the National Committee of the Chinese People’s Political Consultative Conference and the National People’s Congress.

The CCP’s treatment of Chinese scholars indirectly reveals two of the most prominent issues of the Chinese educational system. First, deprivation of academic freedom, and second, commercialization of education.

The first is deprivation of academic freedom. The CCP promised to “guarantee academic freedom” in China. But that has not at all been the reality. More than 2,000 Sino-foreign joint venture universities have been established in China since 2003. In 2017, the CCP ordered the establishment of a party branch in all such universities in China, and asked Communist Party officials to have decision-making power, such as senior staff recruitment, budget allocation, etc. The party branch secretary of each school will have the status of vice president or being on the board of directors. Even foreign universities with branch campuses in China are controlled by the CCP, let alone domestic institutions. Academic freedom does not exist in China.

According to existing laws of the Chinese regime, Sino-foreign joint venture university is regarded as an independent legal entity, the local partner holds 51% of the shares, and the foreign partner holds 49%. Many of these universities offer their own diplomas. These universities must now establish party branches, which will monitor school operations and have a say in administrative matters. According to overseas media reports, rumors about the establishment of party branch orders have been circulating in the education sector since August 2018. The CCP made a formal implementation decision after the 19th National Congress and said that “government, the military, society and schools, etc.” are subject to party leadership. Academic freedom has always been a sensitive issue for foreign universities in China. These universities have been criticized for operating in a country with a poor human rights record.

The second is the commercialization of education. In recent years, the Top Ten Defiant Industry Ranking has continued to spread via social media platforms like Weibo, and the “education industry” has always topped the list. Corruption in colleges and universities is manifested in many aspects, including infrastructure, personnel, enrollment, academics, research grants, etc. According to statistics by the Haidian District Procuratorate of Beijing from 2005 to 2012 on the crimes committed by universities and research institutes, the scope of the case covers the department of finance, libraries, museums, catering departments, equipment, textbooks, teams, health departments, etc. for a total of over 40 different departments.

According to many China watchers, it is believed that Chen Zhili, who served as Minister of Education from 1998 to 2003, has an unshirkable responsibility for the corruption and chaos as seen in China’s education system today. Since 1998, following Jiang Zemin’s instructions, Chen Zhili issued two orders: “Enrollment expansion of colleges and universities” and “industrialization of education.” The expansion of enrollment in colleges and universities has made many college students unable to find jobs after graduation, and the industrialization of education has led to complete corruption in the educational system.

On Dec.16, 2003, the National Development and Reform Commission of China announced at a press conference that in 2003, a total of more than 12,600 cases of “unreasonable fees” related to education were found in its special inspection, and the amount of violations was 2.14 billion yuan. For instance, from January 2002 to September 2003, South China University of Technology received a special fee of more than 3.1 million yuan for students who failed a final exam. Primary and secondary schools have also become profiteering industries. Some prestigious schools charge parents high sponsorship fees, school selection fees, etc., in order to gain illegitimate interests, while high tuition fees keep children in a large number of poor areas out of school. In recent years, there has been an overwhelming number of incidents that students have already been accepted to a college but have to drop out because they cannot afford the tuition. When parents receive the admission offer from their children, many chose to commit suicide for the same reason. “Education industrialization” turns the education sector into an economic industry with a target for profit.

In recent years, so called “education reform” by the CCP has increased opportunities for Chinese students to go to college, but it was not achieved by increasing the amount of national education investment to extend the length of compulsory education by the party, but rather it was achieved at the expense of lowering the quality of education and substantially decreasing education affordability. This educational reform aimed at economic development has almost destroyed China’s higher education, which has led to a rapid decrease in the quality of students and eventually formed the current state that many doctoral students have the same level of knowledge as masters students despite holding a doctoral degree; graduate students have the same level of knowledge as undergraduate students despite holding graduate degrees, etc.

This series of problems in the Chinese educational system is fundamentally caused by the CCP’s totalitarian rule. Academics originated in ancient Greece where the philosophers tried to gain a clearer understanding of the world and life through observation, reasoning, speculation, and debate. Lv Bingquan, a senior lecturer at the Department of Journalism at Hong Kong Baptist University, once said that the political requirements of the Ministry of Education of mainland China are like handing over the human mind and the spirit, only forcing people to go with the CCP and abandon basic academic principles. Indeed, under the CCP’s rule, there are only royal Party followers but no independent academics.

What is described in this article is only one of the many problems in China’s educational system. Li Hongyu, a writer based in Beijing, once said that “the degree of corruption in the political system correlates with the degree of corruption in the educational system. The de-partyization of colleges and universities should be done immediately. In the past, there was no party branch in the university, and the party could not lead everything.” Teachers have traditionally been called “engineers of the human soul.” It is only with a reform in the political system first would it be possible to rebuild a healthy Chinese educational system and fundamentally solve these issues.