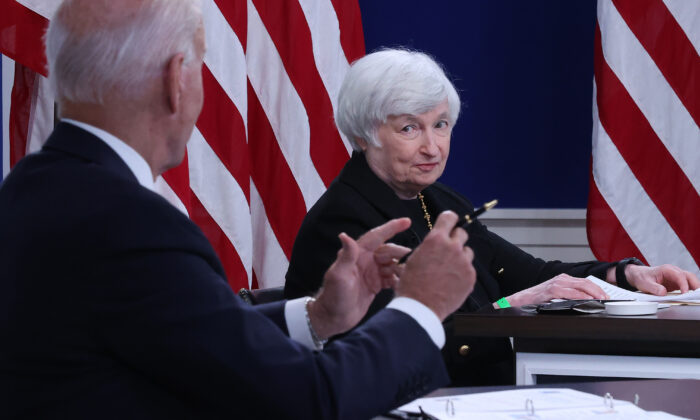 U.S. Treasury Secretary Janet Yellen (C) listens to President Joe Biden during a hybrid meeting with corporate chief executives and members of his cabinet to discuss the looming federal debt limit in the South Court Auditorium in the Eisenhower Executive Office Building in Washington on Oct. 6, 2021. (Chip Somodevilla/Getty Images)
Economy

Treasury Secretary Janet Yellen said Sunday that she believes the U.S. economy will slow down but doesn’t believe a “recession is inevitable.”

“I expect the economy to slow,” Yellen told ABC News’ “This Week.” “It’s been growing at a very rapid rate. … The labor market has recovered, and we have reached full employment.”

The Treasury secretary said the top priority of Federal Reserve Chairman Jerome Powell is to bring inflation down while keeping a strong labor market intact. Last week, the Fed hiked its benchmark interest rate by 0.75 percentage point, the highest rate hike since the early 2000s, in an attempt to offset yearly inflation that soared to 8.6 percent in May.

“That’s going to take skill and work,” Yellen said. “But I believe it’s possible. I don’t think recession is inevitable.”

Other White House officials have similarly proclaimed that there will be no recession, despite CEOs, economists, and ordinary American voters saying otherwise.

President Joe Biden told The Associated Press on June 16 that it’s “not inevitable” that the United States will hit the grim economic milestone, adding, “Secondly, we’re in a stronger position than any nation in the world to overcome this inflation.”

A recent poll from The Conference Board found that more than 60 percent of surveyed CEOs believe there will be a recession in the coming months, while a YouGov/Economist poll revealed that about 56 percent of Americans believe the United States is already in one. More than 51 percent of CEOs also said they are passing price increases downstream because of inflation.

“In the U.S., the Measure of CEO Confidence fell to 42, levels not seen since the start of COVID-19, while confidence levels in Europe dropped to 37. At 34, confidence levels were lowest among CEOs of Western and non-Chinese multinational companies in China, where the measure was taken for the first time. A reading below 50 denotes more negative than positive responses,” the Conference Board report said.

In her Sunday interview, Yellen said that consumer spending is still robust despite concerns about record-high gas, food, and energy prices. Auto club AAA’s data show that the average price for a gallon of regular gasoline stands at around $4.83, representing a 17-cent decrease over the previous week when it hit just over $5 per gallon.

“Not only is a recession not inevitable, but I think that a lot of people are underestimating those strengths and the resilience of the American economy,” Deese said.