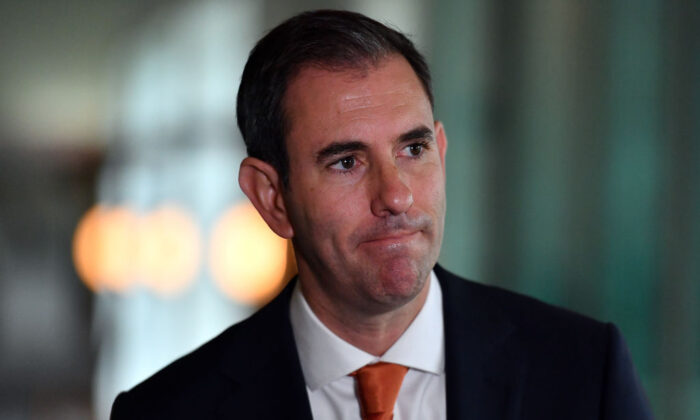 Shadow Treasurer Jim Chalmers during a doorstop at Parliament House in Canberra, Australia on May 11, 2021. (Sam Mooy/Getty Images)
Australia

Treasurer Jim Chalmers is expected to tell people Australia’s inflation rate to exceed seven percent by year’s end as he prepares to deliver an economic update.

Chalmers will make a ministerial statement to the federal parliament on Thursday and present Treasury revisions to the outlook for growth.

“The headwinds our economy is facing – higher inflation at the top of that list, along with slowing global growth – are now reflected in the revised economic outcomes and forecasts,” Mr Chalmers will say.

The new forecasts are predicted to show gross domestic product has expanded by 3.75 per cent in 2021/22, instead of the 4.5 per cent estimated before the federal election in May.

The forecast for growth in 2022/23 will also be revised down to three per cent from 3.5 per cent.

Growth is expected to slow further in 2023/24 to two per cent, from the 2.5 per cent previously estimated.

Off the back of another rise in annual inflation to 6.1 per cent on Wednesday, the treasurer said Australian should brace for more price increases.

“We expect inflation north of seven per cent by the end of the year, but then we expect it to moderate after that,” he told the Seven Network on Thursday.

“There will be a difficult period ahead for many Australians as we try and deal together with these pretty extreme cost of living pressures.”

The treasurer’s statement will not focus on budget forecasts – he’s saving that for a new Labor budget in October – but it will paint a picture of what Australians can expect when it comes to the budget bottom line.

The latest monthly financial statement for May released by the Department of Finance showed the 2021/22 underlying budget deficit sitting at $33.4 billion.

This was an improvement from the $79.8 billion deficit forecast in the former coalition government’s 2022/23 budget handed down in March.

While Australia is performing relatively better than much of the world, inflation was making it hard for people to pay their bills, Dr Chalmers will say.

“Our high inflation is primarily but not exclusively global,” he will say in his speech.

“It will subside but not overnight.”

Shadow treasurer Angus Taylor says the government needs to take action to ensure the budget is in good shape.

“What we don’t need from the government is painting a picture, we need a plan. There are many things that can be done to address this,” he told ABC TV on Thursday.

“We need a plan and one that can help to address these issues in a tough economic context.”

Mr Taylor said economic solutions were needed to prevent further interest rate rises, but deflected suggestions the previous coalition government was to blame for the state of the budget.

“If you don’t act on the budget side, then the Reserve Bank will need to raise interest rates further and impose more pain,” he said.

“We were tightening the belt, we recognised that you need to avoid fuelling inflation – that is what we need to see from the government.”

The International Monetary Fund this week downgraded its outlook for global growth and warned the world was on the brink of recession if risks from high inflation and the Ukraine war are left unchecked.

The economic support agency has forecast real GDP to slow to 3.2 per cent in 2022, compared to its April forecast of 3.6 per cent.

It noted world growth had contracted – or turned negative – in the second quarter due to downturns in China and Russia.