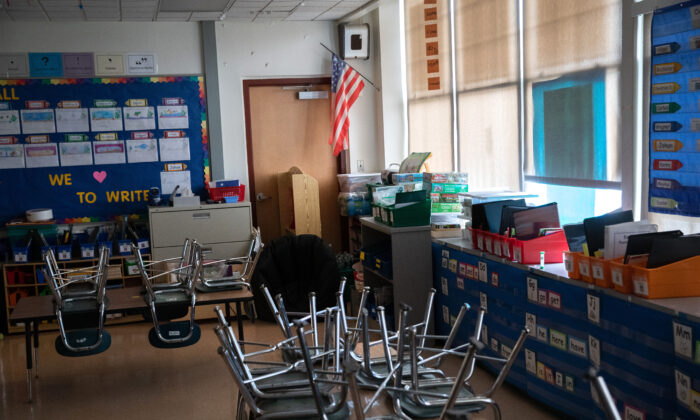 N is for Nonbinary and T is for Trans.

Did you know that?

If you were a kindergartner in Williamson Country, Tennessee, and clicked on the book “The GayBCs” on the iPad given by your school for you to take home over the weekend, you would.

You’d also know the B is for Bi. (You can shout it out loud/ “I like boys and girls/ and that makes me proud.”)

I won’t bother you with the noxious doggerel accompanying those—you can probably make it up for yourself. And no, it’s not a product of Disney, although, given recent developments, it seems as if it could be. It was published in 2019 by Quirk Books with a recommended age range of 4 to 8.

According to GeekDad, this is “A great way to introduce 26 words to kids while teaching them to read.”

Teaching them to read? Do you teach the average 5-year-old reading with the word “nonbinary” (not to mention “I is for Intersex”)? Well, maybe if your kid is John Stuart Mill, who is said to have learned Greek at age 3.

Actually, GeekDad inadvertently let the cat out of the bag. “The GayBCs” are educationally meaningless, in fact, an educational fraud. Hardly any children at that age are prepared to learn to read from them, with or without the traditional parental accompaniment.

It would most likely do the reverse, make the child so overwhelmed and baffled by what would have to be incomprehensible concepts for them, that he or she (apologies for the old-fashioned pronouns) could be turned off reading altogether. It certainly wouldn’t help.

Even Mill undoubtedly wouldn’t have had the maturity to deal with bisexuality at the age of 4, a far more complicated emotional question than the largely intellectual challenge of learning a language.

But that emotional challenge is what is being put in front of the children of rich and Republican Williamson County and undoubtedly many other places across the country.

That material and more are readily available at online libraries. It’s through one of those libraries that “The GayBCs” appeared on kids’ iPads.

Also worth noting, if you’re a third-grader, you’re required to spend 20 minutes nightly on your iPad.

So what really has been going on?

The obvious part is the so-called grooming, a term the left is always complaining about, but is real to a great extent. These teachers and educators are using their classrooms and materials, including the ubiquitous iPad, to encourage, even prepare, children to be LGBT, whether they are or not, or, more accurately, might someday become that way or not.

They have already been successful for older groups through colleges and the media. A recent Gallup poll reports:

Taking non-responses into account, just 78.9% of Gen Z respondents and 82.7% of millennials said they are exclusively cisgender and heterosexual.”

This “success” seems to be growing with younger generations, forcing serious questions of depopulation. All pensions, including Social Security, are Ponzi schemes dependent on expanding growth. We need to procreate to survive.

But is this a fad? Is it transitory? Nobody knows. It may be mean to say queer is the new hula hoop, but this ever-expanding alphabet certainly provides an unending list of possibilities for virtue signaling.

But that’s only the superficial part, the part that attracts the rank-and-file, the fellow travelers of the left. As they say, there’s more.

For their leadership especially, the real import isn’t to teach us to respect the rights of gays—most have done that for years—or to extend our sympathies to intersex people, who would naturally have our support anyway.

They are what has been called Fifth Business, basically beside the point. One way to look at it is that gays are being exploited, just as blacks have been for years by the Democratic Party and now groups such as Black Lives Matter that turned out to be a Marxist front organization that took advantage of its supporters not only ideologically but financially, absconding with funds.

The real intention of the new sex ed, in the grand tradition of Marxism, is to destroy the family and replace it with the state. (BLM, incidentally, sought that too, until they removed it from their website.)

All this strange rise in age-inappropriate sex education we are seeing across America is a stalking horse for the “Great Reset”—globalism. Call it what you will as long as it means that government replaces the family and religion, that government is, in essence, the new religion.

Parental involvement in their children’s education thwarts that in a big way, maybe even reverses it, as it did in Loudon County, Virginia.

We are in an ideological war. The red state of Tennessee (Williamson County, notably) is one of the key battlegrounds, the battle already having been lost for a long time to come in larger blue states such as California and New York.

To give you an idea of just how touch and go this war is, as I’m writing this, I’m receiving word from Williamson County mom Trisha Lucente, founder of Parents’ Choice Tennessee—she and her husband James are the ones who tipped me to the presence of “The GayBCs”—that the propagandistic alphabet and other books have, because of her alert activism, been removed from the county iPads. (No word on other counties or other states.)

That’s the good news. The bad news is that it can easily be reversed. “The GayBCs,” or something slightly more subtle and therefore more pernicious, can come back.

Kathleen Harms—one of Tennessee’s most important conservative activists in the areas of electoral reform, COVID restrictions, and education—has been working her usual 18-hour days making sure this reversal doesn’t occur by opposing—not supporting, as she originally had—Tennessee Senate Bill SB1994. She writes today:

“Sexualizing our children through materials in the School Libraries prompted a Bill designed to remove the exception to educational institutions in the current Code to promote or present obscene, violent, and/or pornographic materials.

“While Section I of this Bill accomplished this, a ‘process’ was added in an Amendment that not only dilutes this Bill but inserts a poison pill that gives unprecedented powers to local School Boards.”

Poison pill indeed. Those are the same school boards that promoted the material in the first place.

They and a statewide association of librarians are leading the charge in favor of this poison pill, in order to preserve what they claim is freedom of speech: All books should be available to all, even kindergartners, in their libraries.

As the author of 13 books and seven feature films, I think I am qualified to say “horse hockey.” Very few books—almost none—are available at all libraries, usually just those selected by the local librarians, who have their prejudices like everyone else. All books are only available at the Library of Congress (with a considerable wait, of course).

Would these same librarians make bomb-making materials available to 5-year-olds? They would probably say the kids wouldn’t understand them anyway. Do they understand “nonbinary”?

These children are being sexualized for nefarious purposes. It’s child abuse, pure and simple.