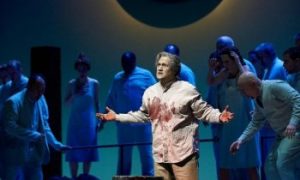 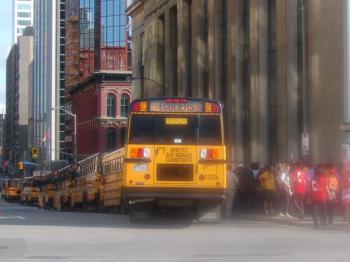 A long line of school buses sits in downtown Ottawa near Parliament Hill. The Chinese embassy in Ottawa made a large-scale effort this week to get Chinese people from across the country to rally in Ottawa in support of Hu Jintao's arrival. Some students studying in Canada on Chinese state scholarships were even told that attending the rallies was mandatory. CINDY GU / THE EPOCH TIMES
US

By Matthew Little
biggersmaller
Print
TORONTO—Secret recordings of the Chinese embassy in Canada giving “battle” briefings to Chinese students on the eve of leader Hu Jintao’s visit were obtained by The Epoch Times. English transcripts of the two audio recordings were released on Friday.

The recordings reveal efforts by the embassy in Ottawa to organize and fund a large-scale, three-day rally in the capital that was intended to “counteract” expected protests by human rights groups.

In one recording, Mr. Liu Shaohua, the first secretary of the education section at the embassy tells Chinese students plans for the rallies. He describes the rally as a “battle” against groups persecuted by the Chinese regime. In the second tape, Liu passes the meeting over to organizer Yuan Pinghua, who tells the students to prepare for “war.”

The articles that The Epoch Times published based on these tapes caused a stir as Hu visited Canada. In the same week, Canadian Security Intelligence Service (CSIS) Director Richard Fadden faced a media storm over comments he made in a CBC interview that some politicians were being influenced by foreign regimes.

Fadden also revealed that Chinese authorities are known to organize demonstrations against Canadian policies it disapproves of with the goal of influencing Canadian policy.

Among Beijing’s sensitivities are any criticisms of human rights abuses in China or shows of support for groups Beijing has targeted, in particular Falun Gong.

Speaking to a crowd of between 40 and 50 students in Canada on Chinese state-scholarships, Liu says they have “no excuse” to avoid participating in the rallies as it is a “political struggle” to protect “the reputation of our motherland.” Liu goes on to describe the embassy's behind-the-scenes role directing the rallies, including details of compensation given to participants.

Liu also advises the students that the conversation is a secret and that they should not to tell anyone outside that circle what was discussed. Yuan says that revealing the discussion would put the embassy in a “deathtrap.”

Both men let the students know the rallies were not a celebration of Hu's visit, but rather a battle against dissenting voices.

Continue to the next page to read the transcripts in their entirety.