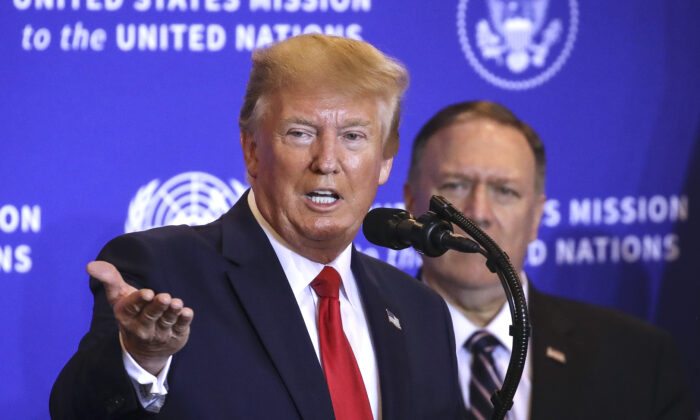 President Donald Trump didn’t exert pressure or offer anything in exchange when he asked Ukrainian leader Volodymyr Zelensky to probe the dealings of former Vice President Joe Biden and his son, Hunter Biden, according to a transcript of a call between the two leaders released by the White House on Sept. 25.

According to Pelosi and other Democrats, Trump’s request for an investigation is inappropriate, since Biden was officially running for president at the time of the call. Pelosi claimed that the request didn’t need to feature a quid pro quo in order to be inappropriate.

In a statement responding to the release of the transcript, Pelosi accused Trump, without evidence, of shaking down Ukraine “for the benefit of his campaign.”

“Either the president does not know the weight of his words or he does not care about ethics or his constitutional responsibilities,” Pelosi said.

“The transcript and the Justice Department’s acting in a rogue fashion in being complicit in the president’s lawlessness confirm the need for an impeachment inquiry,” she added. “Clearly, the Congress must act.”

In a press conference later in the day, Trump said Pelosi has been “taken over by the radical left.”

The Department of Justice (DOJ) determined that Trump didn’t violate campaign finance law when he asked Zelensky to look into Biden and his son.

The DOJ received a referral about the Trump–Zelensky call, which referenced a letter from the Intelligence Community Inspector General (ICIG) addressed to the Director of National Intelligence (DNI). The letter cited the conversation between Trump and Zelensky as a potential violation of campaign finance law, but acknowledged that neither the complainant nor the DNI had firsthand knowledge of the call.

“[The] Department’s Criminal Division reviewed the official record of the call and determined, based on the facts and applicable law, that there was no campaign finance violation and that no further action was warranted,” Justice Department spokesperson Kerri Kupec said in a statement. “All relevant components of the department agreed with this legal conclusion, and the Department has concluded the matter.”

The Trump–Zelensky call is the subject of an anonymous whistleblower complaint sent to the ICIG. The complaint stirred up controversy because the ICIG notified Congress that the Office of the Director of National Intelligence (ODNI) failed to forward the complaint to lawmakers. The ODNI consulted with the Justice Department, which issued an opinion determining that the complaint did not constitute an “urgent concern” and did not have to be forwarded to Congress.

Trump met with Zelensky at the United Nations summit in New York hours after the White House released the transcript. Zelensky told reporters that he didn’t feel “pushed” to investigate Biden, and said he didn’t give special instructions on the Biden matter to the country’s top prosecutor.

“You know there was no pressure,” Trump told the reporters. “All you have to do is see what went on in the call.”

In addition to discussing the Biden investigation, the two leaders also mentioned two other inquiries. Trump asked Zelensky about a server in possession of a wealthy Ukrainian citizen. Trump provided little detail but referenced Crowdstrike, the information technology company that examined the Democratic National Committee server after it was allegedly hacked by Russian operatives.

“I would like you to do us a favor though because our country has been through a lot and Ukraine knows a lot about it. I would like you to find out what happened with this whole situation with Ukraine, they say Crowdstrike … I guess you have one of your wealthy people … The server, they say Ukraine has it,” Trump said.

“Her attitude towards me was far from the best, as she admired the previous president and she was on his side. She would not accept me as a new president well enough,” Trump said.

The exchange suggests that both the United States and Ukraine may be examining Yovanovitch’s conduct. Zelensky asked Trump for assistance in the matter and Trump said that he will have Giuliani and Barr call the Ukrainian leader.

The Justice Department clarified that Trump didn’t speak to Barr “about having Ukraine investigate anything relating to former Vice President Biden or his son.”

Kupec added that U.S. Attorney John Durham is probing the extent to which several countries, including Ukraine, contributed to the counterintelligence investigation of the Trump campaign. Barr didn’t contact Ukraine regarding Durham’s inquiry, but Durham has received information from private Ukrainians who aren’t members of the Ukrainian government. Durham is evaluating the information, according to the DOJ.

Republicans who reviewed the transcript stood by Trump.

“I think it was a perfectly appropriate phone call, it was a congratulatory phone call,” said Rep. Liz Cheney (R-Wyo.). “The Democrats continually make these huge claims and allegations about President Trump, and then you find out there’s no there there.”