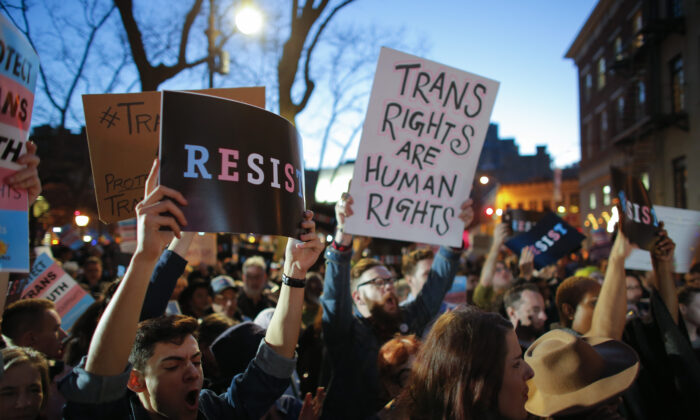 People take part in a rally to support transgender causes in the Greenwich Village area of New York on Feb. 23, 2017. (Kena Betancur/AFP via Getty Images)
Policy

Two Montanans who claim to be transgender filed a lawsuit against the state over a law that requires those wishing to change their sex on birth certificates to prove that they’ve had sex reassignment surgery.

The measure, known as Senate Bill 280, signed in April by Gov. Greg Gianforte, a Republican, provides that the sex designation on a birth certificate may be altered only if the Montana Department of Public Health and Human Services has first received a certified copy of a court order indicating that the sex of the individual born in Montana had been changed by surgical procedure.

State Sen. Carl Glimm, who introduced the bill, said in March he believes a birth certificate is “an item in fact” that should record reality.

The lawsuit, known as Marquez v. State of Montana, was filed July 16 as case number DV21-00873 in the 13th Judicial District Court in the state court system.

Both plaintiffs have taken hormone therapy, and Doe has “completed masculinizing chest reconstruction surgery.” Both have no desire to undergo more surgery.

The American Civil Liberties Union (ACLU), which is representing the plaintiffs, argues the statute in question violates their constitutional rights to privacy, equal protection of the law, and due process, according to a statement. Having a birth certificate that doesn’t match a person’s gender identity puts that individual at greater risk of harassment, hostility, and discrimination, the group stated.

“I would like to change the sex designation on my birth certificate to match my female gender identity, but am unable to do so because of the Act,” Marquez said.

“My inability to obtain a birth certificate that accurately reflects my female gender identity is a painful and stigmatizing reminder of the State of Montana’s refusal to recognize me as a woman. Further, denying me an accurate birth certificate places me at risk of embarrassment or even violence every time I am required to present my birth certificate, because it incorrectly identifies me as male.”

According to the 2015 U.S. Transgender Survey, only 25 percent of transgender people in America reported having undergone some form of transition-related surgery. As a result, advocates say laws requiring surgery make it impossible for most of these people to change their gender on birth certificates or driver’s licenses.

A lack of linguistic clarity has clouded the issue in recent years as the concepts of sex and sexual identity, or gender—a politically and scientifically contentious concept whose definition isn’t universally agreed upon—have become difficult to separate. Despite the distinct meanings of the two words, many institutions and individuals use “gender” to mean biological sex, especially on fillable forms and documents.

“A person’s sex designation is determined by the gender identity, not their sex assigned at birth or their anatomy,” the complaint claims. “Gender-affirming surgery, even for those transgender people who have a medical need for it, does not ‘change’ their sex, but rather affirms it.”

“By embracing the Act, the State of Montana has imposed a draconian medical requirement on transgender people that has no medical or other rational justification. It reinstates an archaic understanding of transgender people and ignores modern medical treatment guidelines.”

Former transgender activist James Shupe told The Epoch Times via email that the lawsuit is nonsensical because the idea that one can change one’s sex is a “legal and medical fiction.”

“So a penis of a male that’s been flipped inside out or otherwise reconstructed by a surgical procedure to resemble a vagina is still made of up cells that are male,” Shupe said.

“Likewise, tissue removed from the arm of a female to construct a fake penis is still composed of cells that are female. No sex change has taken place. It’s legal and medical fiction. When the police find an unrecognizable body on the side of the road, they don’t use gender identity, a person’s belief about themself, to determine the sex of that corpse. Nor do archeologists.”

Shupe, after serving as an icon of transgender activism, denounced the movement and the idea that one can change one’s sex as a fraud. Shupe was the first individual in Oregon to receive legal recognition for his “non-binary” sex designation, only to ask to have the status rescinded and his male sex designation restored on his birth certificate after his epiphany.