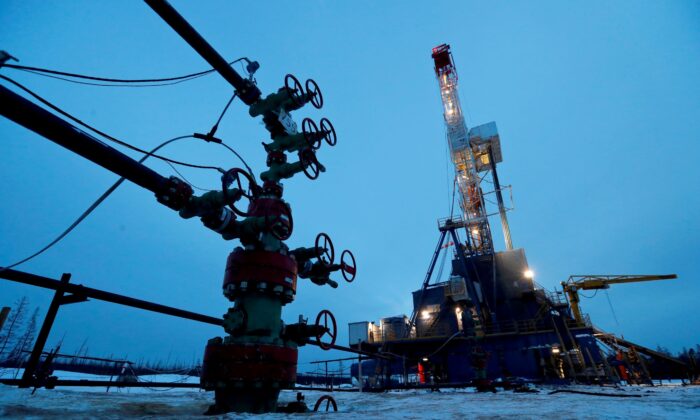 A well head and drilling rig in the Yarakta oilfield, owned by Irkutsk Oil Company (INK), in the Irkutsk region, Russia, on March 11, 2019. (Vasily Fedosenko/Reuters)
Commodities

Traders Betting on $200 per Barrel Oil in March

As the Russia–Ukraine conflict continues to rattle global markets, some traders are betting on crude oil prices to rise to $200 per barrel or more this month, suggesting that relief, in terms of fuel and related costs, is still far off.

The prices of call option contracts for higher crude oil prices rose on March 7, according to an analysis of ICE Futures Europe data by Bloomberg. Roughly 200 options contracts were traded for May Brent futures at $200 a barrel. The price of these options, which expire on March 28, spiked by 152 percent. The cost of $180 per barrel June Brent call options jumped 110 percent on March 7 compared to March 4, while $150 per barrel call options doubled during this period.

Traders are worried that Russian supplies of oil could be severely disrupted, as the country is one of the biggest worldwide suppliers. Russia’s total oil production stood at 11.3 million barrels per day (bpd) in January, putting it third in terms of output, just behind the United States at 17.6 million bpd and Saudi Arabia at 12 million bpd.

There have been talks of sanctioning Russian oil exports, which, if that occurs, would inevitably lead to a spike in prices. This uncertainty is being priced in by the oil markets as prices have soared to the highest since 2008. The Brent oil future May contract rose to $123.63 a barrel after touching a peak at $139.13. So far this month, oil prices have risen by around 25 percent.

Some experts are also predicting the price of oil to move up to $150 to $200 per barrel.

“Prices could spike to $150 a barrel and even higher if the U.S. and allies take even more aggressive steps to reduce oil exports from Russia, as there is not sufficient spare capacity to offset a significant reduction in Russian exports,” said John Paisie, president of Stratas Advisors.

According to Ethan Harris, chief economist at Bank of America, losing Russian energy supplies would be a “major shock” to world markets. A loss of 5 million barrels of Russian oil could push up prices to $200 per barrel, according to his calculation.

JPMorgan is predicting oil to hit $185 per barrel by the end of the year if the supply of Russian oil exports remains unstable.

Russia’s invasion of Ukraine resulted in the West imposing strict sanctions, which has led many oil buyers to refrain from purchasing Russian oil. Roughly 8.2 million bpd of oil exports, accounting for eight percent of global oil supply, have been disrupted as a consequence.

This includes 7 million bpd of Russian supply and 1.2 million bpd of Kazakh oil that’s exported through Russia. The changes in Russian oil supplies are forcing buyers to look for alternative sources in regions such as the Middle East.