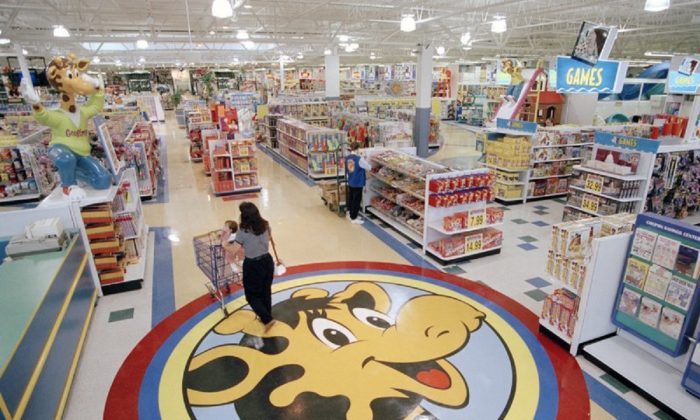 A woman pushes a shopping cart over a graphic of Toys R Us mascot Geoffrey the giraffe at the Toys R Us store in Raritan, N.J. on July 30, 1996. (AP Photo/Daniel Hulshizer, File)
Companies

NEW YORK—Toys R Us fans in the United States should see the iconic brand re-emerge in some form by this holiday season.

Richard Barry, a former Toys R Us executive and now CEO of the new company called Tru Kids Brands, told The Associated Press he and his team are still working on the details, but they’re exploring various options including freestanding stores and shops within existing stores. He says that e-commerce will play a key role.

Toys R Us, buckling under competition from Amazon and several billions of dollars of debt, filed for Chapter 11 reorganization in September 2017 and then liquidated its businesses last year in the U.S. as well as several other regions including the United Kingdom.

“2018 was a very disruptive year, driven by the bankruptcy and liquidation of Toys R Us across most of the world and a rapidly shifting consumer and retail landscape,” said Brian Goldner, Hasbro’s chairman and chief executive officer.

“During 2018, we diversified our retailer base, meaningfully lowered retailer inventories and delivered innovative new offerings to our global consumers. We were not, however, able to recapture as much of the Toys R Us business during the holiday period as we anticipated as the effect of its liquidated inventory in the market was more impactful than we and industry experts expected. It is an unprecedented yet finite event. In addition, as we discussed throughout the year, our European shipments declined as the teams successfully lowered retailer inventories amidst a declining toy and game market.”

In October, a group of investors won an auction for Toys R Us assets, believing they would do better by potentially reviving the toy chain, rather than selling it off for parts. Starting Jan. 20, Barry and several other former Toys R Us executives founded Tru Kids and are now managing the Toys R Us, Babies R Us and Geoffrey brands. Toys R Us generated $3 billion in global retail sales in 2018. Tru Kids estimates that 40 percent to 50 percent of Toys R Us market share is still up for grabs despite many retailers like Walmart and Target expanding their toy aisles.

“These brands are beloved by customers,” said Barry. He noted that the company will focus on experiences in the physical stores, which could be about 10,000 square feet. The original Toys R Us stores were roughly about 40,000 square feet.

Are you going to give the new Tru Kids a try? https://t.co/f0jDksgt15

Barry said he and his team have been reaching out to toy makers and have received strong support. But he acknowledged that many had been burned by the Toys R Us liquidation.

Tru Kids, based in Parsippany, New Jersey, about a 20-minute drive from Wayne, New Jersey, where Toys R Us was based, will work with licensing partners to open 70 stores this year in Asia, India, and Europe. Outside the United States, Toys R Us continues to operate about 800 stores.