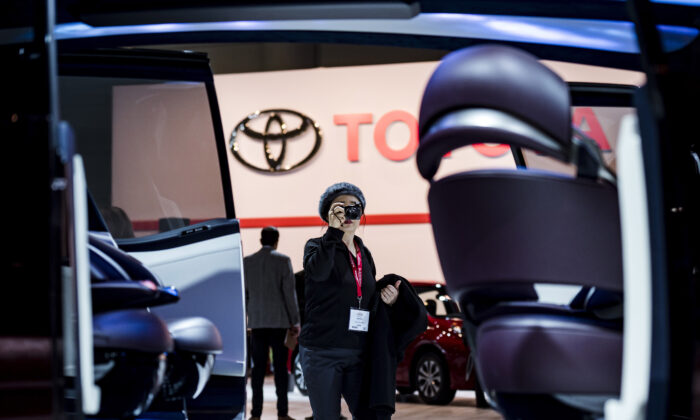 A woman photographs the interior of the Toyota concept car Fine-Comfort Ride at the Canadian International Auto Show in Toronto, Canada, on Thursday, February 14, 2019. (The Canadian Press/Christopher Katsarov)
Politics

Japanese automaker Toyota’s Political Action Committee (PAC) announced on July 8 it will end its policy of giving financial contributions to U.S. lawmakers who objected to the certification of the results of the 2020 presidential election, after the anti-Trump PAC, the Lincoln Project ran an ad slamming the company for donating to those Republican lawmakers.

“In fact, in 2021, the vast majority of the contributions went to Democrats and Republicans who supported the certification of the 2020 election. We understand that the PAC decision to support select Members of Congress who contested the results troubled some stakeholders,” Toyota PAC said in an emailed statement.

“We are actively listening to our stakeholders and, at this time, we have decided to stop contributing to those Members of Congress who contested the certification of certain states in the 2020 election.”

The Members of Congress that Toyota is referring to are about a dozen GOP senators and dozens of House representatives who objected to the results of the Nov. 3, 2020, elections. The objection process is lawful under the Constitution and similar objections have been lodged by Democratic lawmakers in recent presidential elections.

When asked by The Epoch Times if the company was concerned about pushback from Trump voters, Toyota said it had no further comment.

The anti-Trump PAC, the Lincoln Project, launched an ad on Thursday attacking Toyota for donating to Republicans who they say are supporting anti-democratic forces that breached the Capitol building on Jan. 6 during the joint session of Congress while 2020 election was being certified.

“America’s free-market democratic system has been good for companies like Toyota for a long time, so why would Toyota support politicians who tried to overthrow the very system that’s been so profitable for them. … Toyota’s given more money than any company to the seditious politicians who voted to overturn the 2020 election results,” said the narrator in the ad funded by the Lincoln Project.

“Toyota’s number one at finding ways to financially reward the very party that took our nation to the brink on January 6 helping finance a movement that violently sought to take votes away from American customers, not to mention Toyota’s own employees, and it’s time to call Toyota’s corporate leadership. If they don’t reconsider where they send their money, Americans will reconsider where we send ours,” the narrator says.

The commercial followed a June report by Citizens for Responsibility and Ethics in Washington that showed Toyota had given a total of $56,000 since Jan. 6 to those GOP members.

The Lincoln Project said in a Thursday press statement that the ad attacking Toyota is the first in a series that will be run against companies that donate to GOP members who objected to the 2020 results, and will air on mainstream media outlets.

“The Lincoln Project has announced a new strategy to take on the sedition caucus and its enablers, turning its efforts against corporations who are lavishing massive campaign donations on Republicans who tried to overturn the 2020 elections and who now seek to cover up the Jan. 6 attack on the Capitol.”

The Lincoln Project PAC is run by current and former Republicans who officially endorsed Democrat Joe Biden for president and worked to prevent the reelection of former President Donald Trump.

During the 2019–2020 election cycle, the group raised more than $87 million and spent more than $81 million, according to the Center for Responsive Politics. The Lincoln Project put out aggressive, blunt ads to capture the attention of Democrat strategists, some of whom said the group’s Republicans were battling harder against Trump than some Democrats.