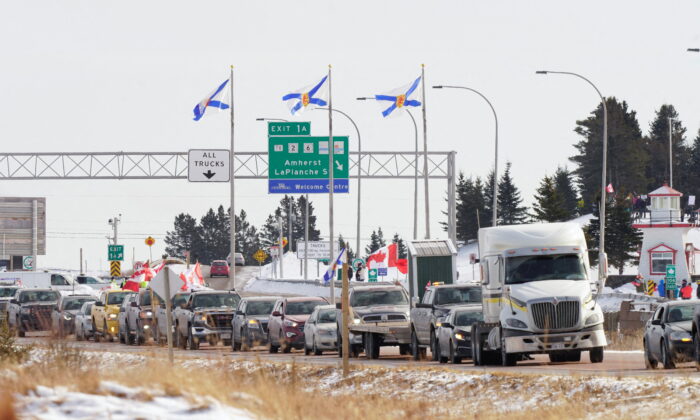 A number of Conservative MPs have taken to social media to voice support for the truck drivers en route to Ottawa in a cross-country convoy protesting the federal government’s COVID-19 vaccine mandate.

Dubbed “Freedom Convoy 2022,” hundreds of vehicles set off from northern British Columbia, with truck drivers joining from across Canada along the way. The group is rallying under an organization called Canada Unity, which will stage a massive demonstration at Parliament Hill on Jan. 29 when thousands of trucks are expected to meet in the capital.

Garnett Genuis, MP for Sherwood Park-Fort Saskatchewan, Alb., said he stands with the truck drivers who are essential to supplying Canada’s grocery stores.

“Preventing people from bringing essential goods into Canada because of their vaccination status when those drivers are sitting alone inside their cabs, and when the Omicron variant is already on both sides of the border, is really the height of absurdity,” he wrote on Twitter on Jan. 22.

The convoy was organized in response to new rules introduced on Jan. 15 that make it mandatory for truckers crossing the Canada-U.S. border to be fully vaccinated against COVID-19 or face a mandatory two-week quarantine upon re-entry. The U.S. government announced similar requirements beginning Jan. 22 for non-U.S. nationals crossing into the country who are not vaccinated, including Canadian truck drivers.

“Trudeau is attacking personal liberty and threatening everyone’s ability to get groceries because of his overreach on vaccine mandates,” he wrote on Twitter on Jan. 24. “He is the biggest threat to freedom in Canada.”

Scheer’s comments were supported by his colleagues Pierre Poilievre, MP for Carleton, Ont., and Leslyn Lewis, MP for Haldimand-Norfolk, Ont.

“I’m proud of the Truckers. Peaceful protest is a cornerstone of our democracy,” Lewis tweeted on Jan. 25. “The liberal mandates are unscientific, vindictive, mean-spirited, and promote segregation. The people have a moral obligation to oppose unjust laws and mandates.”

At a press conference on Jan. 24, Trudeau touted vaccines as “the best way to continue to prevent interruptions in our supply chains” when asked about the inflationary impact of a looming trucker shortage. He added that 90 percent of Canadian truckers have been fully vaccinated.

Federal transport minister Omar Alghebra also said on Jan. 24 that getting the remaining unvaccinated truck drivers to take the jab is “actually a solution to the supply chain issue, not a hindrance.”

The Canadian Trucking Alliance (CTA), which has denounced the convoy protest, says more than 85 percent of the 120,000 Canadian truck drivers who regularly traverse the border are vaccinated, but that up to 16,000 may be sidelined due to the new restriction, exacerbating supply chain problems.

In a joint release Tuesday, federal government and CTA president Stephen Laskowski acknowledged “unprecedented challenges” to a sector that ships the vast majority of food and consumer products, but stressed vaccination as the route to economic health.

“Vaccines, medications, personal protective equipment, food, and supplies continue to arrive where they need to be thanks to the efforts of our dedicated commercial truck drivers,” the release said.

“The government of Canada and the Canadian Trucking Alliance both agree that vaccination, used in combination with preventive public health measures, is the most effective tool to reduce the risk of COVID-19 for Canadians, and to protect public health.”

Several MPs have raised concerns that the vaccine mandate will worsen pre-existing shortages, as Canada’s supply chain remains vulnerable due to pandemic disruptions and spiking inflation.

Martin Shields, MP for Bow River, Alb., said on social media that exemptions should be made for truckers who do not wish to be vaccinated, such as using rapid tests. He said he wants to meet with the truckers when they arrive at the capital later this week.

“Crossing the borders to bring supplies north and south is critical in our industries. It’s critical for having food in our stores, and many other things that we need to [keep] our industries and our businesses working,” Shields said in a video posted on his Twitter page on Jan. 24.

“We need to support those people and essential services and [permit] exceptions, as has been done in other industries, so we get the goods that we need.”

The truck drivers will be heading to Ottawa from three directions—east, west, and south. Truckers from the west coast set off on Jan. 22, while those coming from the eastern and southern regions will hit the road on Jan. 27, according to Canada Unity’s website.

On Jan. 25, the western flank passed through Saskatchewan and was set to arrive in the City of Kenora, Ont., later that evening.

Several local MPs along the route have also voiced support for the convoy, including Saskatoon-Grasswood MP Kevin Waugh and Jeremy Patzer, MP for Cypress Hills-Grasslands.

Melissa Lantsman, MP for Thornhill, Ont., urged Ottawa to “reverse the mandate” for truckers, adding that many grocery stores have reported “worsening supply issues” since the vaccine mandate took effect.

“Lack of action on supply chain will make empty shelves the norm,” she said on Twitter on Jan. 22.

Saskatchewan Premier Scott Moe noted that the Liberal government’s vaccine mandate on the truckers is “unnecessary,” and will “surely have significant impacts” on Canadians.

The vaccine mandate imposed by the Trudeau government on the trucking industry is unnecessary, and will surely have significant impacts on the household goods and products that Canadians rely on.

Conservative Leader Erin O’Toole initially refused to say whether he would meet with the truckers when they arrive in Ottawa when asked about several of his MPs’ open support for the convoy during a press conference on Jan. 24

O’Toole later said in a CTV interview that he would “continue to meet this week and into the weekend with truckers and the industry.”

Canada Unity launched a fundraising campaign through GoFundMe on Jan. 14 to support the convoy’s food, fuel, and lodging, and had accrued over $4.5 million as of Jan. 25.

On Jan. 25, GoFundMe froze access to the funds while it confirms with organizers how the money is being distributed to ensure donors are protected.

GoFundMe told The Epoch Times in an email that the fundraising for the Freedom Convoy has “remained live and continued to accept donations” as of Jan. 25.