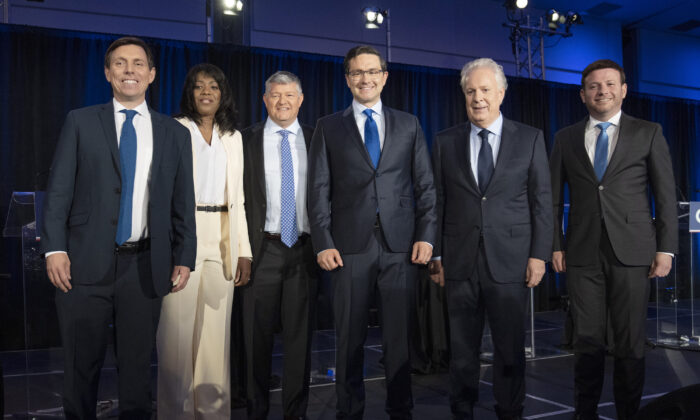 The Conservative Party of Canada’s (CPC) French leadership debate in Laval, Que., was better than the odd spectacle in Edmonton when the use of trombone sound effects and paddles as props made more news than the views of the candidates. The debate was not dominated by shouting and fireworks as was the Ottawa debate hosted by the Canada Strong and Free Network. It was well moderated by Marc-Olivier Fortin who kept a solid hand on the event. All that said, it still wasn’t terribly productive as it was dominated by a form of muted vitriol.

Fortin was forced to chide the audience several times as they cheered and clapped for extended periods for Jean Charest and often booed Pierre Poilievre. It was a contrast to prior debates where Poilievre supporters appeared to be dominant in the audience. Charest needs to have a solid showing in Quebec if he is to win the leadership race and his team was clearly well-organized in ensuring that supporters came out to the event.

Dr. Leslyn Lewis and Roman Baber read from prepared statements on issues but didn’t take much part in debate exchanges due to their limited abilities in speaking French. Scott Aitchison’s French was more solid but he remained predominantly a background figure in the debate and stuck to his notes. The discourse was dominated by Patrick Brown, Jean Charest, and Pierre Poilievre.

Things remained relatively civil for the first half-hour of the debate. Then Brown came out of the blue and accused Poilievre of being a supporter of jailed activist Pat King and implied that Poilievre supports racists. Brown remained focused for the rest of the evening on trying to accuse Poilievre of racism or extremism whenever possible. When asked about policies on China, Brown accused Poilievre of supporting hate speech on his Twitter account. When asked about economic development, Brown said that Poilievre would never get pipelines built because indigenous people don’t trust him.

It is becoming evident that Patrick Brown’s campaign is more based on ensuring that Poilievre loses rather than trying to win the race himself. It became tiresome hearing the constant accusations against Poilievre in the debate.

Being the presumptive front-runner, Poilievre did draw fire from all the candidates. His digital currency policies were harshly criticized, with Brown accusing Poilievre of embracing the economic polices of El Salvador, which uses Bitcoin as legal tender. Charest stated with irony that it was nice that Poilievre hadn’t called for the firing of the head of the Bank of Canada yet in the debate.

The main stances of the candidates can be summarized as:

Aitchison: Canada’s system is broken, and he can unite Canadians and repair it.

Baber: Focused on individual freedoms and rights; a strong stance against Quebec’s controversial Bill 21 which bans the wearing or display of religious items by civil servants.

Brown: Can win elections for the CPC and will win in urban ridings where other candidates can’t.

Charest: Will win and unify Canada through partnerships with provinces and respect for provincial rights. Points to his experience as a premier in giving him the ability to make deals and bring Canadians together.

Lewis: Strongly supportive of individual rights and rights of conscience. A nod to social conservatives.

Poilievre: Supports economic reforms, protection of individual freedoms, and the right to be wrong. He is trying to balance respecting the Truckers’ Convoy protest rights while still distancing himself from their messaging and organizers.

If anybody could be declared a victor in the debate, it would be Jean Charest. Charest remained focused on his campaign points while only occasionally taking time out to take shots at Poilievre. Many of Poilievre’s points were lost as he was constantly on the defensive and fending off attacks from Patrick Brown.

The debate made it clear that the CPC leadership race is a two-person affair. Charest and Poilievre are presenting divergent views for the party. Poilievre is taking a small-c conservative stance with a strong emphasis on individual rights and reforming the system. Charest is an establishment candidate with a red-Tory leaning who wants to work within the system. Having two distinct choices makes for a good competitive race, but it can also lead to dividing the party.

This leadership race is taking a much more personal and combative tone than the last two CPC races. Whoever the winner may be, he or she will have a tough task uniting the party after drawing such distinct ideological lines within it. If the new leader of the CPC is to have any hope of winning the next general election, he or she will have to bring the party together before then. This task may prove impossible if the leadership race continues to be as vitriolic and divisive as it has to date.

The top candidate for the leadership may win the immediate battle, but lose the war in the long run.