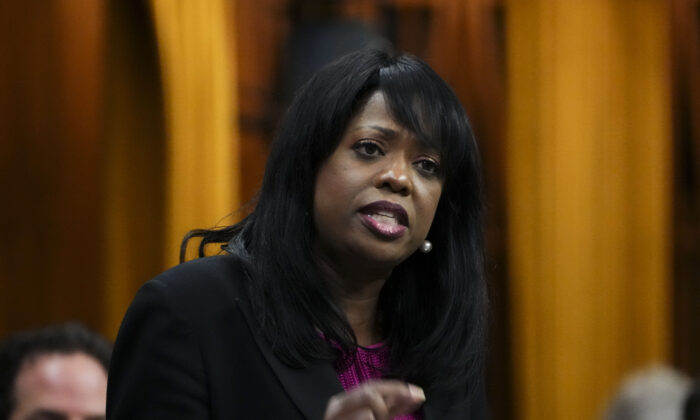 Conservative MP Leslyn Lewis rises during question period in the House of Commons in Ottawa on Dec. 2, 2021. (The Canadian Press/Sean Kilpatrick)
Canada

Tory and Bloc MPs Say Emergencies Act Unwarranted, While Liberals and NDP Cite Protesters’ Views in Supporting Use of the Act

As MPs debated the historical decision by the federal government to invoke the Emergencies Act, some trends emerged in the arguments put forward by both camps.

Some Conservative and Bloc Quebecois MPs said the standard hadn’t been met to implement the measure, while some Liberal and NDP MPs cited the political views attributed to the protesters as they argued for the justification of the use of the act.

And in doing so, both sides claimed to be defending democracy.

“The continuation of the Emergencies Act without clear evidence of a national emergency is a threat to our democracy,” Conservative MP Leslyn Lewis said in the House of Commons on Feb. 19.

The federal government invoked the act on Feb. 14 to deal with protests and blockades. All border blockades had already been cleared or were shortly after, leaving only Ottawa with an active protest, which was being removed by police as Lewis spoke.

Lewis said she examined the justification given by the Liberals to invoke the act and found that the reasons cited are insufficient.

She said the border blockades were cleared without resorting to extra powers, and as for the Liberals’ claim that the measure was needed to prevent adverse effects on the Canadian economy, she noted that lockdowns and mandates also contributed to economic insecurity. In addition, reassuring trading partners shouldn’t require such measures as invoking the act, she said.

Lewis also said the government has been creating a “false narrative” to paint the protesters as terrorists to justify invoking the act.

“It is clear that the prime minister is using the Emergencies Act as a political tool to terrorize and punish dissenters by ruining the lives of people who disagree with him,” she said.

The Freedom Convoy movement came to prominence in late January when truckers across the country converged on Ottawa to call for the end of mandates and restrictive COVID-19 policies. The movement quickly spread, with protesters blocking border crossings in B.C., Alberta, Manitoba, and Ontario.

Conservative MP Brad Vis said on Feb. 19 the government has failed to demonstrate how the situation constitutes an emergency and what concrete steps it took before resorting to the Act.

Vis, who represents the Mission-Matsqui-Fraser Canyon riding in B.C. that was devastated by natural catastrophes last year, said it would have been more appropriate to use the Emergencies Act in those circumstances.

“In my riding, there was danger to life, lives lost, real property damage for thousands, complete social disruption through the destruction of critical infrastructure and a loss of essential goods and services,” he said.

“I can argue more concretely that the disasters that B.C. faced last year are a much better example of when this act could have been used under part I, ‘Public Welfare Emergency.'”

He also brought up the attack on the Coastal GasLink site in Northern B.C. on the night of Feb. 18, when a mob wielding axes attacked security guards, injured a police officer, and destroyed property and equipment, causing an estimated cause an estimated $6 million in damage.

“Will this fall under the radar of our prime minister and his Emergencies Act? There was real violence there,” he said.

Bloc MP Gabriel Ste-Marie, who supports Quebec separation, said the invocation of the act for him had the effect of a “punch in the gut.”

Ste-Marie recalled how the War Measures of 1970, enacted by Pierre Elliott Trudeau to deal with Quebec terrorists, had “traumatized” the province.

He said the Emergencies Act that replaced it in 1988 incorporated safeguards to prevent abuses.

“In the past, the government could invoke the act at will. Now, there are safeguards. We are one of those safeguards, but safeguards are only helpful if they are used. I urge everyone to make use of these safeguards today,” he said while speaking in the House on Feb. 19.

Ste-Marie called the act the “nuclear option of legislative tools.”

Act Should Only Be Used Against Convoy Protesters: Singh

In the House on Feb. 17, Conservative interim leader Candice Bergen criticized the NDP for supporting the Liberals in maintaining the emergency measures for the remaining days of their application until at least mid-March, if they are not revoked before then.

“I want to remind especially the New Democrats of this, who are supporting the Liberals in this sledgehammer approach: History will not be kind to the leader of the NDP or his members on this particular question,” Bergen said.

NDP Leader Jagmeet Singh stated he is concerned the government could misuse its powers, but nonetheless decided to support the government given the views held by the protesters.

“What we are dealing with is not a protest. It is not peaceful,” he said. “They came here to overthrow a democratically elected government. It is a movement funded by foreign influence and it feeds on disinformation.”

Singh said that although he supports the Emergencies Act to deal with the convoy protests, it should never be used against people who support other causes.

“Indigenous land defenders, climate-change activists, workers fighting for fairness and any Canadian using their voice to peacefully demand justice should never be subject to the Emergencies Act. The New Democrats will never support that.”

NDP MP Niki Ashton framed her remarks not on the threshold for invoking the law, but rather on the necessity to use it to counter a movement because of its political views, as well as citing safety risks.

“It was an organized attack on democracy, coming from the far right and financed from abroad. Our citizens were intimidated. Parliament was forced to cancel a sitting because its safety was at risk,” she said.

The sitting of the House was cancelled on Feb. 18 because police started the operation to remove the protesters. Parliament was open during the previous days of protest.

“This occupation has had the aim of abusing and harassing citizens for days; engaging in racist, homophobic, transphobic, and misogynistic attacks on residents; making people afraid to leave their homes; shutting down businesses and workplaces; making people lose their jobs; clogging up 911 phone lines so that legitimate calls cannot get through; and endangering residents and residential neighbourhoods,” Ashton said.

During debate on Feb. 19, Liberal MP Gary Anandasangaree, parliamentary secretary to the minister of justice, said he’s been attending protests “ever since I can remember.”

“We have been protesting the rights of Tamils on the island of Sri Lanka from the time I was maybe four or five,” he said.

But he said that the protest occurring in Ottawa was not legitimate, claiming that the aim was for the “overthrow of a government,” along with emphasizing the presence of symbols of hate.

A Nazi flag and at least two Confederate flags were captured on camera on Jan. 29 only, and have been used since by the government to accuse the movement of racism and bigotry.

Accounts by The Epoch Times and other sources show the protest movement in Ottawa was diverse, with different communities participating, from Sikhs to First Nations. Protest organizers dismiss claims that their movement is violent.

“There has never been violence in the three weeks that I have been here. … There was no damage,” Freedom Convoy spokesman Tom Marazzo said in Ottawa on Feb. 19.

Liberal MP Greg Fergus, parlimentary secretary to the prime minister, justified invoking the act by mentioning the Ottawa Police Service had said the additional tools provided were needed to clear the streets of the city.

Fergus also accused the convoy organizers of being “white supremacists” who leveraged COVID-19 fatigue and frustration to spread their views.

“The people I am talking about are the organizers who exploit that exhaustion to recruit people on social media and spread messages of hate,” he said.

Fergus said the financial measures targeting protesters and organizers were needed to stem the flow of foreign funds, and welcomes making some of these measures permanent, as his government has announced.

“I hope that legislation will follow so that on a permanent basis we can get this kind of wrong money out of the Canadian political system.”