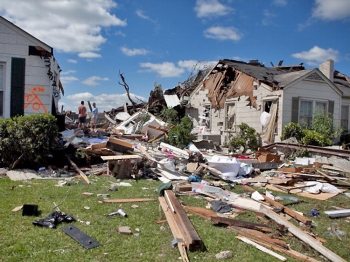 In the aftermath of a severe tornado, debris from homes in the Cedar Crest neighborhood that were destroyed lies on the lawns on April 28, 2011 in Tuscaloosa, Alabama. As of 8 a.m., at least 131 deaths were accounted for in Alabama. (Jessica McGowan/Getty Images)
US

Tornadoes in South Kill at Least 248

After dozens of tornadoes devastated the South Wednesday afternoon and evening in the worst outbreak in almost four decades, the death toll climbed to at least 248 people in six states.

As of 11:25 a.m. local time Thursday, the Alabama Emergency Management Agency confirmed 162 deaths in the hardest-hit state of Alabama. The death toll reached 32 in Mississippi, 32 in Tennessee, 13 in Georgia, eight in Virginia, and one in Kentucky.

The tornado-spawning storms also damaged hundreds of homes and injured hundreds of people in many of the states on Wednesday, which marked the deadliest tornado day in the United States since 310 people were killed on April 3, 1974.

“Our hearts go out to all those who have been affected by this devastation, and we commend the heroic efforts of those who have been working tirelessly to respond to this disaster,” President Barack Obama said in a White House statement Wednesday evening.

Upon approving Alabama Gov. Robert Bentley’s request for emergency federal assistance Wednesday evening, Obama announced Thursday morning that he will travel to Alabama on Friday to view the damage and meet with Bentley, state and local officials, and families affected by the storms.

The National Weather Service’s Storm Prediction Center documented 164 tornado reports on Wednesday, making this month’s total nearly 800 so far. Even though many reports could be from the same storm, the number of confirmed tornadoes will most likely exceed the old April record of 267 in 1974.

The NWS said that damage assessments for Wednesday’s historic tornado outbreak will continue for the next couple of days.

Although the storms are moving out of Wednesday’s most devastated states, NWS meteorologists are forecasting strong to severe thunderstorms along the East Coast from northern Florida to western New England with high winds, hail, and isolated tornadoes on Thursday.

Worried about their loved ones, those outside of the badly affected states are sending well wishes to their families and friends near the tornadoes via Twitter.

“Be praying for my family in Georgia. Scary tornado situations within three miles of my parents house,” Twitter user Heather Culley tweeted Thursday.