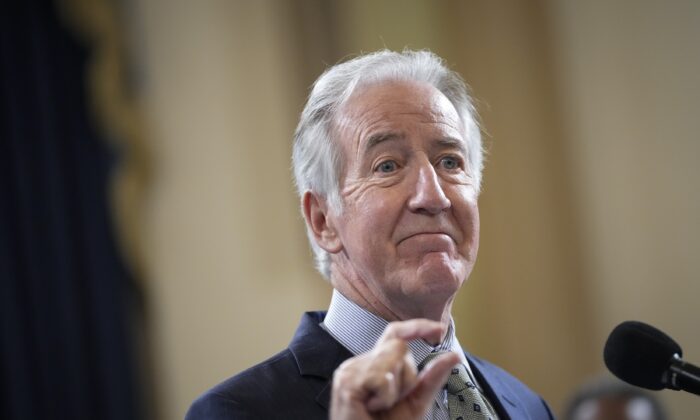 House Ways and Means Committee Chair Richard Neal (D-Mass.) told reporters on Aug. 12 as the House considered the $700 billion Inflation Reduction Act that Democrats would be open to further tweaking the tax code after November.

Specifically, Neal said that further tax code changes than those included in the Inflation Reduction Act would target high-income individuals and corporations.

“I do think that there’s a chance here to address some fundamental tax-reform issues,” Neal said.

The Inflation Reduction Act, a compromise reconciliation bill hammered out after months of negotiations between Sen. Joe Manchin (D-W. Va.) and Senate Majority Leader Chuck Schumer (D-N.Y.), made substantial changes to the tax code—but not nearly as substantial as some Democrats would have hoped for.

For instance, the Inflation Reduction Act held onto key provisions from the now-defunct $1.75 trillion Build Back Better Act (BBB).

Key among these changes is a new 15 percent minimum tax on the income of corporations who bring in more than $1 billion a year. Though the current federal tax rate on corporations is 21 percent, many mega-corporations ultimately end up paying less after exemptions, deductions, write-offs, and other tax code workarounds are taken into account.

Rather than using the traditional measure of taxable income to determine whether this rule applies to a corporation, the new tax would rely on what’s known as book income.

As opposed to taxable income, which takes into account deductions, exemptions, write-offs, and other elements of the tax laws, book income describes a figure shown to investors which tracks a company’s revenue before anything else is taken into account.  This, critics has warned, could be disastrous for investment, as it gives companies an incentive to reduce their book income and thus appear less profitable than they are in the eyes of would-be investors.

Further, the final draft of the bill carried over a provision from the BBB 1 percent excise tax on all corporate stock buyback transactions.

Though this provision was not included in the original draft of the bill worked out by Schumer and Manchin, Democrats were forced to add it in exchange for removing provisions closing the so-called “carried interest loophole” in order to win the critical support of Sen. Kyrsten Sinema (D-Ariz.).

That said, the Inflation Reduction Act does not make any changes to individual income tax rates, leaving many Democrats feeling that the package was incomplete.

Because of the current composition of Congress—including a barely Democrat-held lower chamber and an evenly-divided upper chamber, where Manchin and Sinema’s approval is necessary for the passage of any reconciliation bill—Democrats have been unable to push through their widest-reaching legislative aspirations.

However, if the party retains control of the House and widens its majority in the Senate by two votes, the situation will be dramatically different, and Democrats may find themselves unconcerned with the objections of Manchin and Sinema during the next Congress.

On the other hand, Republicans are widely expected to take back the House next year after four years of Democrat control, which since the blue wave in 2018 has narrowed to only four seats. In the current milieu, with consumer prices rising rapidly, unprecedented crime waves across the United States, and other voter concerns, Republicans consider their shot at taking back the House to be substantial.

The Senate, on the other hand, is harder to predict, as lawmakers in swing states on both sides of the aisle buckle up for intense campaigns to hold onto their seats.