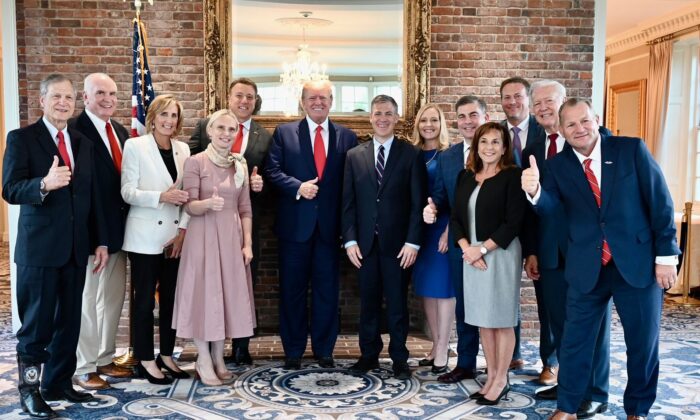 Rep. Jim Banks (R-Ind.) said that Republicans’ 2022 midterm losses were not because of former President Donald Trump because he “wasn’t on the ballot.”

“Donald Trump remains a very popular figure in the Republican Party in each corner of the country,” Banks, the head of the influential Republican Study Committee, told Fox News Sunday. Banks added that when the 45th president was on the ballot in 2020 and 2016, Republicans “won a lot more seats” than in 2018.

Republicans were projected to win big in both the House and Senate before the 2022 midterms. After days of vote-counting in Arizona and Nevada—events that were similar to the aftermath of the 2020 election—races were called for incumbent Sens. Catherine Cortez Masto (D-Nev.) and Mark Kelly (D-Ariz.), giving Democrats the majority in the upper chamber. A runoff race is still being planned for Dec. 6 for Georgia’s Senate seat.

When asked about whether he’d support Trump in 2024, Banks demurred. An adviser to Trump, Jason Miller, told news outlets last week that Trump will announce Tuesday that he is running for reelection during an event at his Mar-a-Lago resort.

In the House, Republican candidates got 6 million more votes than Democrat candidates, although many close races in swing districts broke in favor of Democrats. It’s not clear what party will take control of the House after the midterms.

But individuals close to McConnell have blamed Trump in recent days.

Steven Law, the head of the Senate Leadership Fund, told CNN that Trump’s endorsement of some candidates for the Senate helped Democrats late in the election cycle.

“Keeping the focus on Joe Biden and Democrats who had voted for inflationary spending and who supported soft on crime policies, those are the priorities,” Law said. “And to the extent that there’s any distraction from that, it diminishes our ability to drive home that argument.”

Meanwhile, Trump has said he backs Sen. Rick Scott (R-Fla.) to be the Republican leader. Scott is currently in charge of the Senate’s reelection arm.

“I think Rick Scott would be much better than McConnell,” Trump told TheBlaze over the weekend. “I know McConnell well. His wife, I call her CoCo Chao. I wasn’t sad to see her go. I’m not a fan of McConnell, and I am a fan of Rick Scott.”

For his part, Scott has publicly called for the postponement of the Republican Senate leadership vote, which is scheduled for next week.