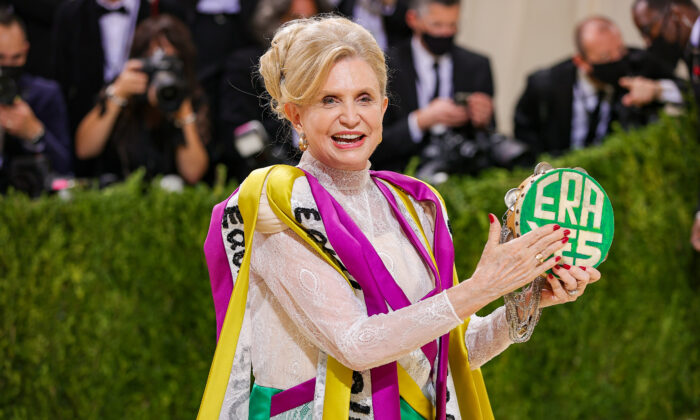 Rep. Carolyn Maloney (D-N.Y.) is under investigation for allegedly asking for an invitation to the Met Gala, which would violate House rules and federal law on solicitation of gifts, according to a congressional ethics watchdog.

In a June report (pdf) released on Nov. 21, the Office of Congressional Ethics (OCE) said it has “substantial reason to believe that Maloney may have solicited or accepted impermissible gifts” associated with her Met Gala attendance in 2016. The charity event, considered a fundraiser for the New York Metropolitan Museum of Art’s Costume Institute, is generally frequented by celebrities, singers, actresses, and fashion luminaries.

“If Rep. Maloney solicited or accepted impermissible gifts, then she may have violated House rules, standards of conduct and federal law,” the OCE board wrote in the 15-page report, before transferring the matter to the bipartisan House Ethics Committee. In a Monday press release, the committee publicized the findings and said to look further into the matter, though noted the mere fact of the extension and disclosure didn’t indicate any wrongdoing.

Maloney, 76, a longtime attendee of the Met Gala, had secured $2.75 million in federal funding for the Met from 2003 through 2011, and requested in March 2020 $4 billion in federal assistance for nonprofit museums, including the Met, for COVID-19 relief, according to the OCE report. The congresswoman also said she couldn’t recall a year in which she was not invited to the gala.

Yet investigators obtained an internal memorandum from the Met showing Maloney’s name crossed out of its 2016 invitation list. Citing a witness testimony, the report said the congresswoman had specifically requested an invitation to the 2016 event.

“I received a call this past week from Carolyn. She is unhappy to say the least that she is not receiving an invitation to the Party of the Year,” former Met President Emily Rafferty wrote in an email dated April 2, 2016 to then-director and CEO of the museum, Thomas Campbell. “She went on about how much she does for the Met, always responsive when you call, and proactive re the institute’s concerns in DC,” the email reads.

Maloney told investigators she didn’t remember the call with staffers.

She received an invite that year and every year since then. The OCE report also cited a 2018 email that suggests Maloney’s 2016 outreach played a role in future invitations. It also cited an email thread showing Maloney may have requested an invitation as recently as 2020, asking whether she was invited to the ball and how to contact a Met government affairs employee.

Maloney, an outgoing New York Democrat, denied the allegation (pdf), saying the House Ethics Committee “has provided no concrete evidence” that she was actually requesting an invitation.

A spokesperson for Maloney told media that the congresswoman was “confident” the House Ethics Committee would dismiss the investigation, yet was “disappointed by the unproven and disputed allegations.”

The incumbent, who has represented New York City’s Upper East Side since 1993, including its 12th Congressional District since 2013, is leaving office after this year after losing to incumbent Rep. Jerry Nadler (D-N.Y.) in a Democratic primary race.