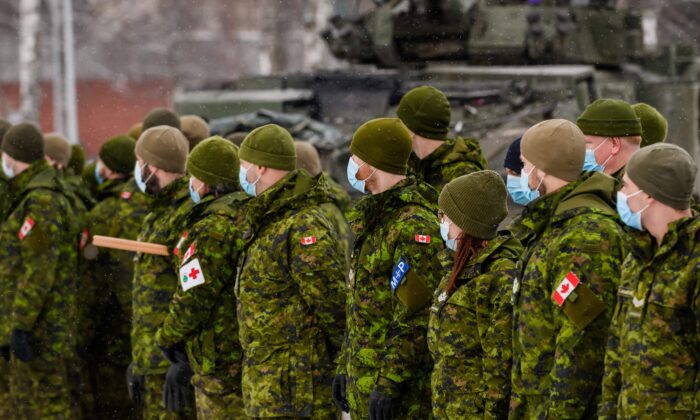 Canadian commentators have been scathing in their assessment of the disparity between Justin Trudeau’s lofty Ukraine-related rhetoric—“unwavering and steadfast support”—and the sad reality of aid Canada can deliver: not enough, and much of it unfit for purpose. In assessing the embarrassment of our present military enfeeblement relative to past engagements, the National Post’s John Ivison alluded to an “air of despair” that is shared by “many members of the Canadian Forces.”

Despair? More precisely, the war against Ukraine has caused disappointment.  “Despair” is a condition that emerges over time in a military. Declining recruitment is its primary symptom. In the last decade, several federal audits have identified serious recruitment failures in the Canadian Armed Forces. The army, navy, and air force are currently estimated to be short by 7,000 recruits. “It has been a challenge,” said then-deputy defence minister John Forster at a 2017 hearing of the Commons public accounts committee, “and it continues to be a challenge.”

According to Andrew MacGillivray, a west coast sailor with a specialty in Naval Boarding Parties, and three high readiness deployments to his record before his voluntary departure from the navy last August after 12 years of service, diminished morale is in large part due to the military’s “woke” obsession with unrealistic diversity and equity targets.

The top brass are particularly fixated on gender parity, an elusive goal in spite of expensive marketing campaigns. MacGillivray told me the old scoring system in recruitment based in aptitude and “trait self-description” has been sidestepped in order to meet gender and racial quotas. The Royal Military College of Canada leaves beds empty, he said, rather than slip below the female 25 percent threshold. Embarrassingly, women who join overwhelmingly eschew combat roles (armour, infantry, combat engineer), which are presently occupied by 1,535 women, or 5.2 percent of female members.

In his letter to a high-ranking officer explaining why he no longer felt comfortable in the military, MacGillivray described the aggressive diversity, equity and inclusion programs based in critical race theory, which he couldn’t in conscience participate in. In the letter he also ascribed low CAF morale to the fact that Justin Trudeau “is despised by the majority of tactical level soldiers and sailors.”

Trudeau’s federal vaccine mandates, which, he boasted, are “some of the strongest in the world”—certainly the strongest of any G7 country—are indeed making a bad morale situation worse. At a time when provinces are lifting most restrictions, and other countries are retiring vaccine mandates, the military is cracking down hard on all CAF members who refuse the vaccination, or who are “unattested”—i.e., refuse to divulge their vaccination status.

It’s not as if these members pose a serious health threat to themselves or others. On the contrary. For one thing, 98 percent of CAF members are fully vaccinated, well above the Canadian rate of 84 percent. And for another, the profile of this community is one of very low risk: Members are young to middle-aged and necessarily fit, with no comorbidities.

As of mid-March, 894 members had not received the vaccine, 409 were awaiting accommodations, and 1,991 were unattested. So far, about 20 CAF members have been discharged under the rubric of “5F,” which designates the individual as unfit for service. According to MacGillivray, 5F denotes “moral weakness.” It is indubitably a stain on one’s record that could have negative consequences in future endeavours.

About 350 CAF members have joined in a class-action lawsuit against the chief of the Defence Staff on the umbrella ground of “abuse of power,” according to their Alberta-based lawyer Catherine Christensen. Over the past seven years, Christensen has established herself among CAF members as a sympathetic ally who invests high energy and moral passion in her clients’ cases. I interviewed her, and she didn’t pull her punches in criticizing military elites. She describes the CAF as being “in chaos,” with morale as “at an all-time low.”

On Feb. 6, the CDS doubled down, demanding a booster for all double-vaxxed members being deployed. It is now estimated that anywhere from 1,000 to 3,000 members are at risk of dishonourable discharge. These are not “troublemakers,” says Christenson. They are “really skilled, experienced people,” their discharge a serious loss to the military. For example, Canada spends $30 million to train just one fighter pilot, and she estimates there are 17 pilots among her class-action clients. One of her clients is a top sniper instructor who CAF spent $1 million to train.

Some refuseniks have been treated badly in the course of their vaccine dissent. Christensen provided examples. A CFB Valcartier man with an impeccable record was, as punishment for refusing the vaccine, allegedly forced to stand outside daily in the January cold for many hours at a time in a place where his fellow soldiers would pass him. He claims to have lost 15 pounds of muscle mass by the time he finally requested release, perforce under 5F.

In another case, a young private suffered neurological injury from his first vaccine dose. His doctor advised against getting a second. He claims to have been threatened with loss of career and benefits if he refused. He took the second dose and is now permanently injured, unable to function optimally. According to Christensen, he was told if he sought any kind of legal consultation he would lose all his supports. She told me Veterans Affairs Canada has informed anyone with a vaccine injury that they will not cover these injuries, despite the vaccination being mandatory.

The lawsuit is based on a litany of charter breaches. A sampling: Medical records were seen by outside co-workers (medical privacy); informed consent was denied, as access to information was withheld, and risks undisclosed; failure to report vaccine injuries; and denial of religious and mental health supports. Experimentation on CAF members was allegedly carried out at a biomedical facility in Saint-Jean-sur-Richelieu, Quebec. There is more, and it makes uncomfortable reading.

MacGillivray believes the military is in a “state of managed decline.” Christensen believes that her class-action suit “goes far beyond vaccines,” that it reflects a dire lack of trust among members in their chain of command. Are they reliable narrators? The objective reader will justifiably point out that MacGillivray may represent only a tiny cadre of CAF members, and that evidence for Christensen’s opinions has been filtered through the inherent “selection bias” of her alienated clients.

Anecdotes, we are told, are not evidence. That’s a misleading dictum. When similarly themed anecdotes mount up, they eventually constitute a pattern that is evidence. I believe MacGillivray and Christensen reflect a pattern suggesting that the phrase “air of despair” was by no means an overstatement.