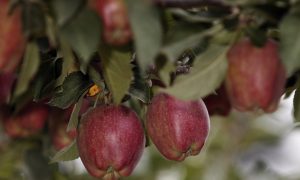 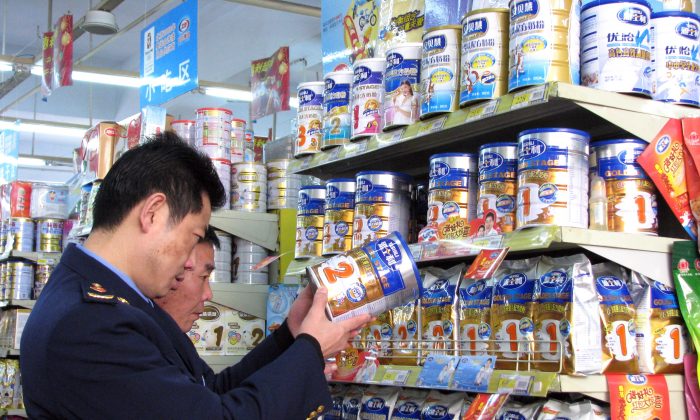 Chinese enforcement officers check the dates on the tins of milk powder at a shop in Tongzi, southwest China's Guizhou region on February 9, 2010, as dairy products containing the industrial chemical melamine have been turning up again in stores. China is hunting for nearly 100 tonnes of tainted milk powder that was supposed to have been destroyed after a 2008 scandal over the deaths of six babies. (AFP/Getty Images)
China

Chinese food scandals have made media headlines for years now. From deadly melamine in milk products  to harmful honey, China has long allowed toxic food products (and other dangerous exports) to leave its borders. Most American media and the U.S. government have not made enough effort to inform the public that food from China may be dangerous and is rarely inspected by the Food and Drug administration. FDA inspectors examine a mere 2.3 percent of all food imports. Thus, it is left up to consumers to safeguard their own health by making smart choices about what to put on the table.

Here are the top 5 products imported from China that you should watch out for.

Foods Everyone Should Avoid in China
Tilapia is the current fish of favor. Whole Foods Markets are promoting Tilapia with an onsite chef and free tasting. TV commercials promoting Tilapia are frequent. Yet 80 percent of the current tilapia supply—382.2 million pounds per year—comes from China.

It is well known in China fish farmers won’t let their children eat the seafood they cultivate. There was a report in China a few years ago of a young girl living in a fish-farming village who started to get her period at age 7 because of the high levels of hormones used in fish cultivation. Farmers use strong antibiotics and growth hormones to keep fish alive in often overcrowded dirty conditions.

2) Cod
About  51 percent of cod on the U.S. market is from China, or about 70.7 million pounds per year. What is true for tilapia, is equally the case for cod farming.

If you are buying a bargain apple juice that doesn’t taste very good, it might be a product that has traveled a long distance—all the way from China. About 50 percent of the apple juice sold in the United States originates in China—about 367 million gallons per year.

Pesticide residues that remain on fruits, vegetables, and processed foods when they enter the food supply have long been a problem. China is the world’s largest pesticide producer and has largely failed to address illegal or dangerous chemical residues on foods, a fact made evident by the nation’s generous maximum allowable residue levels.

Try to steer clear of canned mushrooms; 34 percent of processed mushrooms are from China, or 62.9 million pounds per year.

5 Imported Vegetables From China You Should Avoid
There are many ways garlic can enter into all kinds of processed food. About 31 percent of garlic, or 217.5 million pounds per year, is from China. You might see label “organic product,” but in reality, there’s no third party to checking and certifying “organic” products in China. To turn a profit, anyone can label a product as “organic.”

* The above information is based on the 2011 data presented on May 8, 2013 in testimony before the House Committee on Foreign Affairs, Hearing on the Threat of China’s Unsafe Consumables. Food imports from China have been increasing by about 7 percent each year.

If you wonder how dangerous these food products could be to your health, check out these reports on environmental pollution in China.

Understanding the Pollution Problem in China

According to the South China Morning Post, “As much as 70 percent of Chinese rivers and lakes are polluted from industrial facilities like chemical and textile plants.”  Recently, residents in Zhejiang, one of the less polluted provinces in China, offered 300,000 Yuan ($50,000) if government officials would dare to swim in the local waterway.

The U.S. embassy in Beijing releases air pollution reports each hour. Americans living in Beijing depend on that information to decide whether they’ll go out or not at that time.

There have been numerous reports on China’s horrific pollution of air, water, and soil. With that level of pollution, it is almost impossible to have safe food.