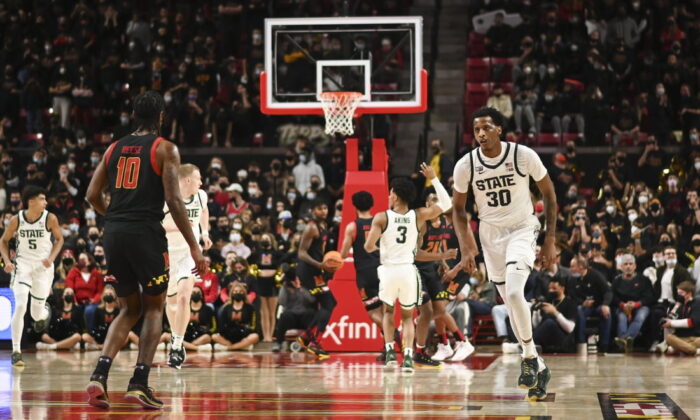 Malik Hall scored on a driving layup with 1.9 seconds to give No. 13 Michigan State a 65–63 victory against Maryland on Tuesday night at College Park, Md., moving the Spartans into a first-place tie in the Big Ten.

Hall scored a game-high 16 points and Marcus Bingham Jr. added 10 points and six rebounds as Michigan State (17–4, 8–2) gained a share of the top spot in the conference. The Spartans are tied with No. 11 Wisconsin and No. 18 Illinois.

Michigan State had a 15-point lead early in the second half, but the Terrapins rallied and tied it at 61-all on a 3-pointer by Russell with 2:49 left. After Hall and Maryland’s Donta Scott each made two free throws, neither team scored again until Hall’s game-winning layup. Russell’s halfcourt heave at the buzzer was wide.

Wendell Green Jr.’s 23 points, eight rebounds and six assists off the bench led the Tigers to their 18th straight win, a defeat of the visiting Crimson Tide.

Auburn (21–1, 9–0 SEC) withstood an early second-half counterpunch from Alabama (14–8, 4–5) and swept the season series. Walker Kessler starred at both ends of the court for the Tigers, finishing with 14 points, 12 rebounds, eight blocks and four steals. Jabari Smith added 17 points.

The tandem of Jaden Shackelford and Jahvon Quinerly tried to keep Alabama in the game with 26 and 20 points, respectively.

David McCormack recorded 14 points and 14 rebounds as the Jayhawks overcame a season-high 22 turnovers to defeat the Cyclones in Ames, Iowa.

Kevin McCullar scored 19 points and Kevin Obanor added 17 as the host Red Raiders rode their early momentum to defeat the Longhorns in a raucous Big 12 Conference game in Lubbock, Texas.

The game marked the return of Texas coach Chris Beard, who left Texas Tech for his alma mater in April. Texas Tech (17–5, 6–3 Big 12) led by 14 at the half and weathered a Longhorns rally that cut their margin to 55-49 with 8:44 to play. Bryson Williams added 16 points for the Red Raiders.

Marcus Carr led Texas with 18 points, 13 in the second half. Courtney Ramey scored all 12 of his points in the first half as the Longhorns (16–6, 5–4) had their three-game winning streak snapped.

Jared Bynum scored a season-high 19 points and hit the go-ahead 3-pointer with 3:03 remaining as the Friars extended their winning streak to six games with by beating the Red Storm in New York.

Posh Alexander led all scorers with a career-high 29 points and his 12 assists were also a career high, but it was not enough as St. John’s (11–9, 3–6) lost for the sixth time in eight games.

Ryan Hawkins recorded his sixth double-double of the season and the Bluejays held the Huskies to two field goals over the final seven minutes in pulling the upset at Storrs, Connecticut.

Hawkins put up game highs with 23 points and 11 rebounds. Creighton (13–7, 5–4 Big East) had lost its previous two games and its past three on the road.

Senior Isaiah Whaley scored a career-high 20 points for UConn (15–5, 6–3), which had won five in a row, all against unranked opponents.

Kennedy Chandler had 16 points and seven assists and Olivier Nkamhoua added 15 points, seven rebounds and three blocks as the Volunteers rode a strong first half to a win over the Aggies in Knoxville, Tenn.

Daeshun Ruffin scored 19 points before being injured and the Rebels held off a second-half rally to beat the Tigers in Baton Rouge, La.

Ruffin had to be helped to the locker room after he appeared to land awkwardly on his right knee when he was fouled with 12:05 left in the game. Luis Rodriguez had 15 points, 12 rebounds and three steals, and Nysier Brooks scored 10 for Ole Miss (12–10, 3–6 Southeastern Conference).