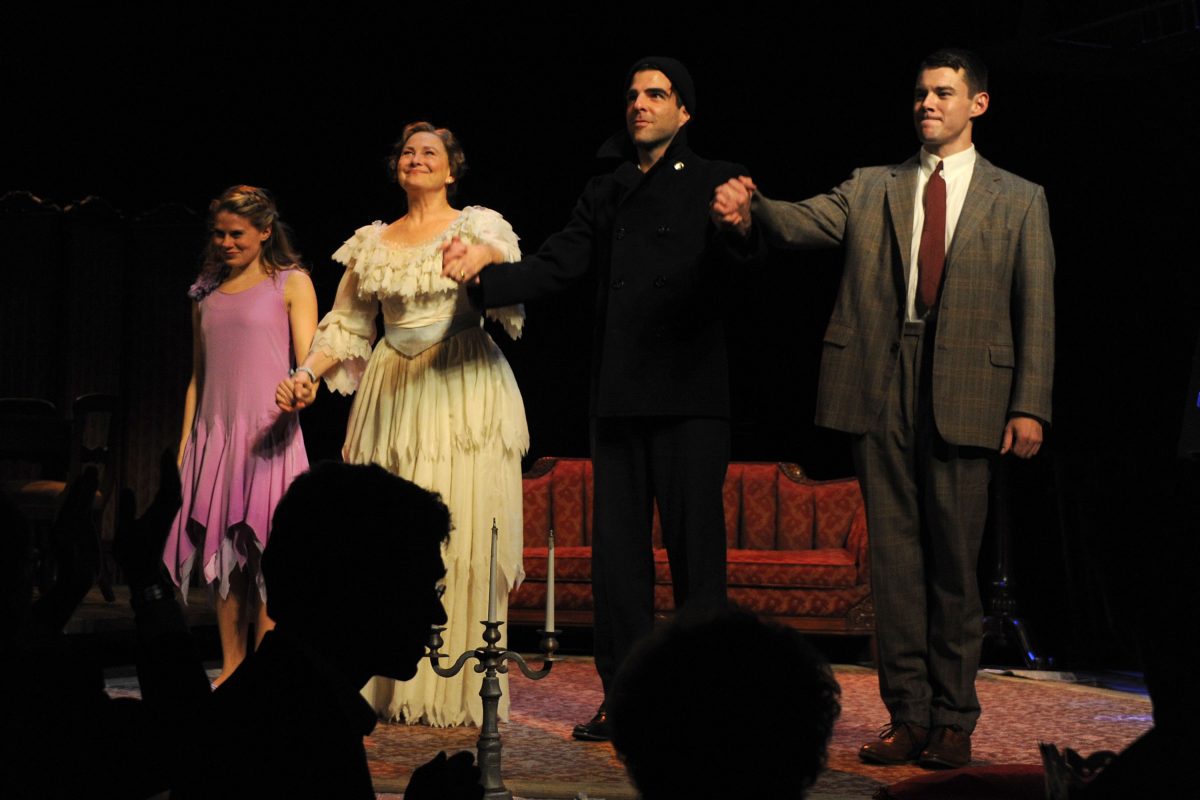 I stumbled across Wade Bradford’s list of the 10 best plays to see for theater novices and was interested to find that I agreed with so many of the playwright and English professor’s choices.

As a holiday treat, I present an audience-friendly list in the same spirit. These plays are classics in their own categories (tragedy, comedy, farce, and so on), having stood up well over the years, and in a couple of cases, very many years.

My list also includes the broader categories of children’s and musical theater. Thus, I choose to add a bit more variety of tone and genre than Mr. Bradford, whose list favors realistic drama. I hope the changes still “serve as an introduction to the world of plays,” and suit many tastes.

“A Midsummer Night’s Dream” performed at the Mariinsky Theater in Moscow, Russia, on March 31, 2013. (Shutterstock)

I agree with Mr. Bradford’s No. 1 choice. There is a very good reason that “A Midsummer Night’s Dream” is so often produced by colleges. It is easy to understand and mixes fantasy and reality in a delightful frolic. I’ve seen more imaginative productions of “Midsummer” than any other of the Bard’s plays.

At its best, “Midsummer” can leave audiences laughing themselves silly. The “mechanicals,” a term for the lowly craftsmen who try their hands as amateur tragedians—usually steal the show with their so-bad-it’s-good performances.

For those few passages that are unwieldy and allusion-ridden, the best way to survive (for those who aren’t interested in study) is practicing something a colleague once told me: Treat Shakespearean language as beautiful music and don’t try too hard to understand it. Just let it wash over you.

2. “The Glass Menagerie” by Tennessee Williams

I agree with Mr. Bradford that “The Miracle Worker” by William Gibson is a heartfelt and inspiring story centering on a loving relationship. But I still would choose the play that put Tennessee Williams on the map: “The Glass Menagerie,” his sentimental memory play of family strife.

Not purely realistic (as other choices below fit that bill), Williams’s script calls for placards onstage to introduce and summarize each scene, and one character serves as both narrator and key participant in the four-person play.

Tom, the narrator and son in the story, wants to start a life of adventure, but to do so he must abandon his nagging mother and beloved crippled sister.

When performed well, “Menagerie” will always lead to hearty discussion. It pits the needs of one generation against another and shows how some decisions can haunt us an entire life. It’s a story almost anyone can relate to.

3. “The Crucible” by Arthur Miller

Although Arthur Miller’s “Death of a Salesman” has been sometimes considered the most important American play of the last century, I find it tries too hard to speak for its time. Instead I would choose Miller’s “The Crucible.”

Set during the Salem witch trials, a girl claims that she has met the devil and starts accusing town people of practicing witchcraft. Over time, the whole town is swept up in taking sides.

The play shows that the devil is indeed alive but not where Salem folks think he is. Evil is most active when fear controls us.

The play takes a hard look at both the cost of giving in to fear and the cost of standing up to it.
I would rather watch John Proctor wrestling with his demons than Willy Loman being smothered by them in “Death of a Salesman.”

4. “The Importance of Being Earnest” by Oscar Wilde

Cast Members from Oscar Wilde’s “The Importance of Being Earnest” pose during a photo call at Trafalgar Square  in London on May 3, 2007. (Stuart Wilson/Getty Images)

A big yes to Mr. Bradford’s choice of “The Importance of Being Earnest.” Although all of Wilde’s characters sound alike (like witty Wilde himself) and aren’t really individuals, it’s hard to care when every line drips with drollery.

The triviality of Victorian England’s upper-class society is laid bare. The main couple is ill-fated, it would seem, when the lady announces that she can only love someone with the Christian name of “Earnest,” and unfortunately her fiancé’s real name is Jack—ah, what’s a man to do?

5. “Oedipus, the King” by Sophocles

Any list should include at least one real tragedy. Although accepting Oedipus’s abysmal fate can be hard for modern viewers to accept, “Oedipus” is worth the attempt, and I choose it over his “Antigone.”

In some ways, “Oedipus” is a perfect play. The clever plot is a whodunit for Oedipus in that he seeks the murderer of the former king.

The plot is so tightly and aptly constructed that Aristotle considered it a perfect play. As with Shakespeare, the language might be difficult (depending on the translation), but the tone matches the ultimate and crushing revelations.

“Oedipus” takes viewers to a very different understanding of what’s important in life. His final sacrifice demonstrates a willing to take utter responsibility for his actions, and thus this play stands as a testament to true nobility.

6. “A Raisin in the Sun” by Lorraine Hansberry

I considered replacing Mr. Bradford’s choice of a realistic drama, “A Raisin in the Sun,” with August Wilson’s “Fences,” since I think Wilson’s brilliant plays should be viewed as standard today. “Fences,” in particular, might appeal to our legions of sports lovers since it centers around an aging baseball player whose career preceded the time when blacks were admitted to the major leagues.

But I saw a production of “Raisin in the Sun” a month ago, and it was brilliant. Despite the fact that Lorraine Hansberry wrote her classic in the late 1950s, the play asks a question that deserves avid attention even now: What happens when our dreams can never be made real? How gracefully do we deal with the life we are dealt?

This powerful family drama with rich characterizations offers actors a gold mine to explore.

In place of another farce (the hilarious “Noises Off”), I felt it important to include one swashbuckling romance and hence choose “Cyrano de Bergerac,” a classic that periodically reappears onstage.

“Cyrano” satisfies both those with poetic souls who long for beauty and those who long for action, honor, and distinction.

Cyrano, as a reminder, is a literary genius and man of the sword, who loves his beautiful cousin. Yet he cannot woo her because of a physical defect—he has a very large nose.

This is another play in which the language is important because Cyrano’s genius rests on his literary prowess, but it is also a play of great feeling and tenderness.

Rather than include yet another realistic play, I forego Mr. Bradford’s sensible choice of Henrik Ibsen’s “A Doll’s House,” deciding to include a piece completely outside of adult literature. One choice, I think, should be reserved for children’s plays.

I choose the classic “Peter Pan.” It’s the story of the boy who doesn’t want to grow up but yet misses his mother, so he tries to bring a young “mother” to his world of wonder, “Neverland.”

With such an odd collection of character types (Indians, pirates, fairies, and mermaids), it is sure to please children if not the adults accompanying them. Besides, it’s always fun to see someone fly.

9. “Our Town” by Thornton Wilder

I agree wholeheartedly that Thornton Wilder’s “Our Town” should remain on the list. I saw the David Cromer production of “Our Town” when it was still in Chicago a few years ago, and it was haunting, partly because he directed Wilder’s masterpiece so that the audience ended up sitting in the graveyard with the ghosts in Act 3.

Wilder celebrated small-town life and somehow made palpable the connection of little moments in our lives with eternity and existence itself. Heavy stuff that doesn’t feel heavy at all—it is all extraordinarily ordinary.

Helping him achieve this aim, Wilder relied very little on what is typically seen onstage—there are no sets and few props. A narrator sets the scenes for us, so that we are forced to use our imaginations.

10. “Fiddler on the Roof” with music by Jerry Bock, lyrics by Sheldon Harnick, and book by Joseph Stein

Aaron Zebede as Tevye the Milkman on Fiddler on the Roof in Panama, Oct. 2012. (Wikimedia Commons)

I’m removing the absurdist classic, “Waiting for Godot” by Samuel Beckett from the list for reasons of accessibility. It is not a play for everyone.

It occurred to me that I should include at least one musical since musicals are actually the most likely play an American will see. I decided to pick one from the Golden Age of musicals, but even in limiting the number to earlier, less edgy shows, I found choosing one a daunting task.

I settled on “Fiddler on the Roof.” Despite its age, the musical doesn’t feel dated—perhaps because it chronicles a certain history—thus, viewers know and accept they are meeting another culture from another time.

A Jewish peasant in pre-revolutionary Russia must come to grips with increasingly difficult changes to all he has ever known. Despite its bittersweet ending, the audience leaves feeling that compassion can triumph over any travail.

Although most of those listed above are suitable for someone seeing their very first play (except for “Oedipus”), I recommend that viewers start with a genre they already like—if you like realistic drama, don’t see “Our Town,” “Fiddler on the Roof,” or “A Midsummer Night’s Dream” first. If you dislike British humor, hold off on “The Importance of Being Earnest.” Give yourself time to adjust to the new medium before plunging into something too different.

Of course, the caliber of a production can make or break any play. Therefore, it’s usually wisest to see a professional production, read a critic’s opinion first, or consult a trusted, savvy friend.

Live theater has thrilled audiences for hundreds, if not thousands of years. Even if your first venture displeases you, try again—I’m sure that these 10 plays offer enough variety to please almost everyone.