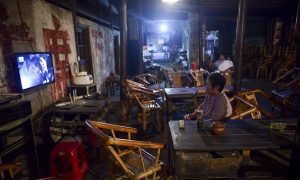 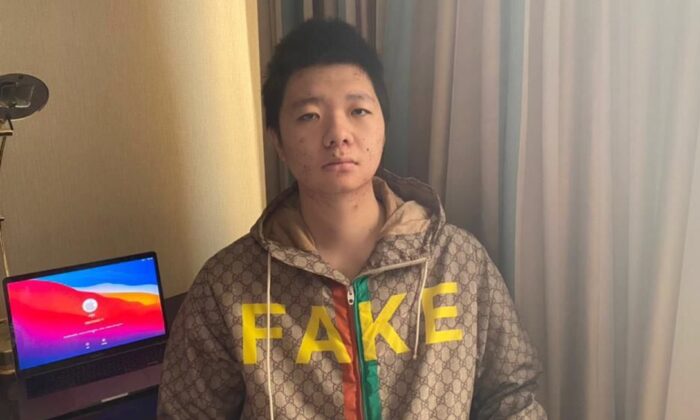 Wang Jingyu in an undisclosed location in an undated photo. (Courtesy of Wang Jingyu)
Chinese Resist the CCP

Nineteen-year-old Wang Jingyu was summoned back to China from overseas on Feb. 21 after he criticized the Chinese Communist Party (CCP) for underreporting Chinese deaths during the June 2020 China-India border clash.

Beijing authorities have since detained his parents, who live in southwestern China’s Chongqing, raided their house, dismissed them from their state-run company positions, and assaulted them, in an attempt to force Wang to stop talking to overseas media and go back to China.

On Feb. 27, Wang told The Epoch Times that he couldn’t reach his parents by phone and was threatened by police from Chongqing that they would do worse to his parents if he doesn’t go back.

Wang left China in July 2019 after he posted a video on TikTok in support of Hong Kong protesters and faced potential detainment.

His latest ordeal started on the evening of Feb. 21, when Wang commented on Chinese social media site Weibo: “Why did you [the CCP] announce the death toll so late? What on earth are you are hiding?”

Wang was commenting on a bloody clash on the disputed India-China border that occurred on June 15, 2020. For eight months, the Chinese side refused to recognize any deaths, but announced four deaths on Feb. 19. India had pegged China’s death toll at 45.

Wang’s posts were removed from Weibo immediately. Chinese state-controlled media soon posted a wanted notice, in which Chongqing police announced that Wang’s posts insulted Chinese soldiers, was suspected of the crime of “picking quarrels and provoking trouble,” and would be put into criminal detention once arrested.

“Within 15 minutes [after the state-run media published the wanted notice], three police and three plainclothes from local Qinjiagang Police Station in Chongqing entered my parents’ house. They handcuffed my parents and raided the house,” Wang said. “They took away many things from the house, such as a piece of rough jade, some foreign currency cash, my desktop, and iPad.”

The police then detained Wang’s parents in two separate rooms in the police station until midnight.

“They forced my parents to call me. Forced them to ask me to go back to China, force me to keep silent and don’t talk to any media. They asked me [via my parents] to post a confession video on Weibo. I rejected all these requests,” Wang said.

In the early morning of Feb. 22, the police released Wang’s parents. However, to Wang’s surprise, his parents lost their freedom again shortly after.

Wang thought he made clear to the police that he wouldn’t acquiesce to their demands no matter what they did. He thought his parents would be free and back to normal life.

At 6:00 a.m. on Feb. 22, just a few hours after Wang’s parents had returned home from the police station, the police arrested them again.

“From Feb. 22 to Feb. 24, police detained my parents at the police station from 6:00 a.m. to 6:00 p.m.,” Wang said. “They handcuffed my parents, and didn’t give them anything to eat. They just detained them and barely talked to them. After they were released from police station, a large number of officials from different government organizations visited my parents and asked them to force me to go back to China.”

Wang was angry about the police and officials’ actions. That’s when he started to talk to overseas Chinese-language media.

Then on Feb. 27, Wang couldn’t reach his parents again.

“Police from Chongqing police bureau called me today,” he told the Epoch Times, adding, “They asked me where I am now and threatened to punish my parents more. I can’t reach my parents. I don’t know where they are.”

Wang said his parents were dismissed from their state-run company positions on Feb. 22.

“I really feel the Chinese regime is too low. It’s a rogue. It wants to kill my parents just because of my speech. I’m an adult and I’m the person who takes the responsibility for what I’m doing,” Wang said. “I’m very worried about my parents, but I’m not afraid of the regime. I didn’t do anything wrong.”

Wang was born and raised in Mainland China. Unlike the majority of Chinese teenagers, Wang learned how to circumvent the CCP’s censorship and surf the free internet when he was in middle school.

“I like to read the Nine Commentaries on the Communist Party,” Wang said, referring to the editorial series published by The Epoch Times. “I kept on thinking about what I could do after I knew the origin of the CCP and how it seized power and ruled China. My father’s experience also awakened me.”

Wang explained that his father once worked at Shapingba Police Branch Bureau as a police officer in Chongqing. At that time, his father witnessed his officer colleagues collecting “protection fees” from local businessmen and raping young women, claiming that they were illegal prostitutes.

In July 2019, Wang circumvented the censorship again and read the news about Hongkongers protesting against a controversial extradition bill that the regime planned to launch. Touched by Hongkongers’ spirit of pursuing freedom and democracy, Wang posted a related song on Douyin, Chinese version TikTok.

“Very quickly. The Chongqing police summoned me, and both my parents’ passports and travel permits to Hong Kong and Macao were seized” by the companies they worked at, Wang recalled. “On the evening of July 9 [2019], I bought a ticket and flew to Hong Kong via Shanghai to escape [possible arrest].”

Since then, Wang hasn’t returned to China and has continued to post freedom-related content on Chinese social media platforms.

“I feel that I should let more Chinese people know the truth. They should be awakened from the CCP’s brainwashing,” Wang said. “I feel my life is meaningful if I can wake up one Chinese person by posting the truth online.”

Still a teenager, Wang has many ambitions. He was planning a trip around the globe at the time of his interview with The Epoch Times.

“I want to protest in front of Chinese embassies in different countries. I will shoot videos and edit them into a documentary to post on YouTube,” Wang said. “I believe the bottom of people’s hearts is kind. Chinese people are fooled by brainwashing … I want to wake them up by telling them the truth no matter how badly they insult me.”

Correction: A previous version of this article gave an incorrect immigration status for Wang Jingyu. The Epoch Times regrets the error.