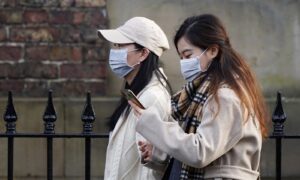 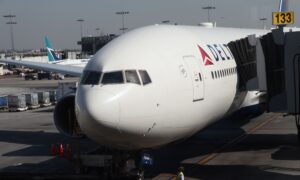 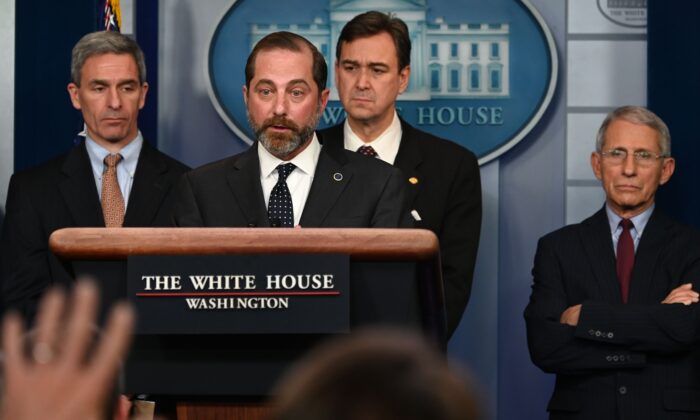 Secretary of Health and Human Services Alex Azar takes questions during a briefing with members of the president's Coronavirus Task Force in Washington, on Jan. 31, 2020. (Andrew Caballero-Reynolds/AFP via Getty Images)
CCP Virus

The United States will bar entry to foreign nationals who have been in mainland China in the past 14 days, in a ramp-up of efforts to stem the spread of the coronavirus.

The temporary ban will not apply to the immediate family of U.S. citizens or permanent residents and will take effect at 5 p.m. EST on Sunday, U.S. Secretary of Health Alex Azar announced at a press conference on Jan. 31.

Azar added that U.S. authorities have officially declared the coronavirus outbreak a public health emergency in the United States.

The measure comes as a growing number of countries close their borders or announce travel restrictions with China. The deadly coronavirus has spread to 23 countries outside of China, with 132 confirmed cases. In China, official figures report thousands of people have been infected and over a hundred killed, with the number surging on a daily basis, although experts say the actual number is likely far higher.

Azar also announced that any U.S. citizen who has been in the province of Hubei—which houses the epicenter of the virus, Wuhan City—in the last 14 days will be subject to a mandatory quarantine of up to 14 days upon arrival into the United States.

For any returning U.S. citizen who has been to the rest of mainland China in the last 14 days, they will be given a health screening at select ports of entry, and then subject to up to 14 days of monitored self-quarantine, he said.

Anthony Fauci, director of the National Institute of Allergy and Infectious Diseases, said that the measures were implemented because “there’s a lot of unknowns” surrounding the novel coronavirus.

“The number of cases have steeply inclined each and every day,” Fauci said.

He said that while it was previously unknown if an infected person could transmit the disease to another person if they did not exhibit any symptoms, “now we know from a recent report from Germany that that is absolutely the case.”

Azar said the risk of infections to Americans remains low and measures have been put to place to ensure it stays this way.

There have been six confirmed cases of the virus in the United States, with the most recent being the first case of human-to-human transmission in the country. An Illinois man, who had not been to the virus epicenter of Wuhan, contracted the disease from his spouse who had recently returned from the Chinese city.

“It is likely that we will continue to see more cases in the United States in the coming days and weeks, including some limited person-to-person transmission,” Azar said.

The U.S. State Department yesterday advised citizens not to travel to China after the World Health Organization (WHO) declared the outbreak a global health emergency.