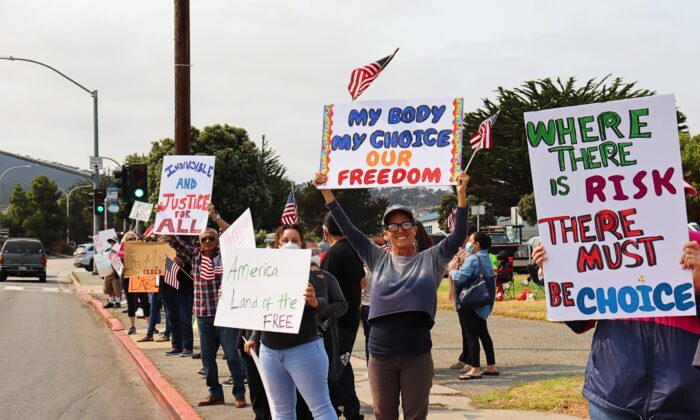 To Comply, or Not to Comply: Virginia State Employee Chooses Termination Over Obedience

For Nancy Orr, the decision to make her own medical decisions came with a high price.

Getting fired in September from her executive assistant position at Richmond’s Library of Virginia wasn’t exactly a surprise, however, because, as she told The Epoch Times, she saw it coming.

“Like many people at the beginning of this, I wore a mask, and tried to honor what they were recommending,” Orr said.

In December 2020, she had contracted the CCP (Chinese Communist Party) virus, commonly known as the novel coronavirus, the pathogen that causes COVID-19.

Her physician, Leland Stillman, who has now moved his practice (Leland Stillman, MD) from Virginia to Orlando, Florida, had prescribed her ivermectin, which she said reduced her symptoms within hours.

Stillman told The Epoch Times that Orr was one of many patients he had prescribed ivermectin beginning last year, “with great results.”

“I still prescribe it to patients because I don’t see any downsides, and there are tremendous upsides,” Stillman said. “What kind of doctor doesn’t prescribe a therapy that he knows is effective, with documented efficacy in the literature, and is safer than Tylenol?”

“But that’s not recognized under this executive order,” Orr said.

In August, Virginia Gov. Ralph Northam enacted an executive order that requires state employees to show proof of vaccination or be tested weekly.

Orr said she stopped wearing the mask months prior because she said, in addition to having natural immunity, wearing the mask causes her respiratory distress, raising her heart rate, which leads to high blood pressure.

To Comply, Or Not To Comply

After having COVID-19, she considered the testing, mask, and vaccine unnecessary for her, but as government guidelines turned into mandates, the ominous choice loomed: to comply, or not to comply.

“I could not in good conscience participate in the process because I see it explicitly as a vaccine passport,” Orr said.  “They don’t have the right to that information. They don’t have the right to segregate people based on their medical status, and it’s not based on anything scientific because we now know that the fully vaccinated can be infected and transmit the virus.”

Privileging people based on their medical status is discriminatory, Orr added.

She considered the religious and medical exemption that was available due to her COVID-19-recovered status, but decided against it.

“I just realized that if I chose a medical exemption, I would be validating or even declaring participation by declaring my vaccine status, and it’s simply none of their damn business,” Orr said. “It’s private medical information, and just because someone issues an executive order, that doesn’t make it legal, and it certainly doesn’t make it moral or ethical.”

Orr said she turned to an individual rights advocacy organization called The Zunga, described by one of its members, John Jay Singleton, as an organization of professionals that provides representation for people to exercise their rights within the framework of the Americans with Disabilities Act (ADA).

Under the COVID-19 protocols, Orr said people are classified as having an infection, which is a qualifying disability under the ADA.

Because of this, she said, if one is deemed disabled, that person has the right to invoke protection under the ADA, which she said means she has the right to decline “any accommodation” that is being offered, such as the testing, masks, and vaccines.

Using templates and guidance from her membership with The Zunga, she filed a complaint of discrimination against the Library of Virginia and the Equal Employment Opportunity Commission.

“There is an active investigation,” Orr said. “I will also be filing a federal lawsuit for wrongful termination, discrimination, and retaliation based on the disability they regarded me as having, which resulted in the termination of my employment.”

At 63 years old, Orr said she had planned on working at the library until she retired.

“I’m not a person of significant means, so I’m taking a considerable financial hit,” Orr said.  “It’s been uncomfortable and distressing.”

Orr doesn’t expect to triumph with her complaint against the library, she said, “since medicine and government have been weaponized,” adding that she doesn’t think she’ll even be able to get unemployment.

“But I’m following through because this is in alignment with what I believe to be true,” Orr said.

Meanwhile, she said, she’s moving on with her life, getting involved politically, and seeking out others who are not complying.

‘No Strings on Me’

Leading up to her termination, she experienced anxiety and sleepless nights, she said, as narratives around COVID-19 policies veered further out of the bounds of rationality.

“I couldn’t stomach it anymore,” Orr said.  “I personally see everyone involved in this as complicit in criminal activity in perpetuating Gov. Northam’s order.”

At the very least, her consolation today is that she is free, proclaiming: “there are no strings on me.”