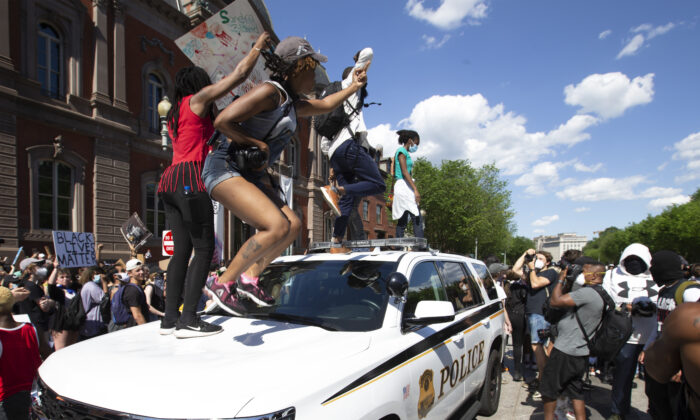 Rioters jump on a secret service police car outside of the White House on May 30, 2020. (Jose Luis Magana/AFP via Getty Images)
Viewpoints

To Change the Left, Be Their Psychiatrist

One of the most difficult things to do is to change someone’s mind about the issues of the day that are so crucial to us.

Changing someone’s ideology, if you can call it that, is even harder.

Most of us want to do it, but few of us can, especially when it comes to changing the minds of relatives and friends (who often become former friends in the process). Such attempted conversions are weighted with baggage, often going back to childhood, that surpasses politics and obliterates any possibility of reason.

Affecting the opinions of an acquaintance works on rare occasions; the more casual that acquaintance, the more possible. Often, you’ll do better with a stranger sitting next to you on a plane than someone you know.

Still, few minds are moved by direct confrontation or argument. Bringing forth facts further has little value if the other side has no interest in them. And they don’t.

Witness the extent the legacy media has gone not to report on the trial of former Hillary Clinton campaign lawyer Michael Sussmann that reveals key Democrats to be despicable and deeply immoral, having perpetrated what Michael Goodwin aptly calls “the dirtiest dirty trick ever.”

The same can be said of the media themselves, whose denizens, as Glenn Greenwald points out in a new report, are, in essence, addicted to lying for profit, huge profit in some cases, while covering up for the Democrats.

The liberal/progressive rank and file have been hypnotized by those same multimillion-dollar liars, creators of what has now been called “mass formation psychosis.”

Most everything this rank-and-file thinks is thus mythological: a form of, or replacement for, religious belief.

No wonder you and I have trouble using reason to persuade them of the rightness of our cause.

So what do we do?

Work with groups, of course, that are trying to change things locally and nationally. If you can’t find a group, help form one. Organize. In other words, rely on the safety of numbers to make a change.

But one-on-one, step lightly. Don’t waste time arguing or reasoning on an individual basis. Almost always, this will backfire. The person you are trying to convince will end up hating you, while becoming more entrenched in their mythological views.

If you think of these people as victims of that mass formation psychosis, you will realize they aren’t in their right minds. The word psychosis is there for a reason.

I hate to say this, because, as noted above, family and friends are often involved, but think of these people, bluntly, as mental patients.

If you wish to have any success at all in changing them, treat them that way. I know it sounds mean, but there really is no other way.

That means no arguments. Instead, ask them questions kindly about their views. Let them explain them as long as they wish. Don’t interrupt. Let them finish and then ask another question—gently. Don’t go too far. You are the psychoanalyst, ironically, in an era when the field of psychiatry has been almost entirely taken over by the left.

Nevertheless, you can do it. You don’t need a credential. As with many things, that’s meaningless. Be patient. Keep asking those questions. Never argue, just ask. (Do this subtly, of course, so you won’t seem condescending. And resist the temptation—it will be there for sure—to prove you are right.) Let them lead themselves to whatever conclusions they make.

Ultimately, those conclusions may surprise you. After all, the reality of life is largely conservative. It’s mostly common sense. Beneath their years of indoctrination, these are still human beings, dealing with the same daily issues we all do. They have to take out the garbage and drive their kids to school. When they are more comfortable with you, change will … very slowly … begin. Don’t rush!

In some cases, they may even be grateful to you because most liberals and progressives, in my estimation, are depressed. They will welcome the opportunity to talk without judgment.

And remember, people change without us anyway. Joe Biden came into office one of the most popular of all presidents and is already, in about a year and a half, close to the least popular of all time and headed downwards. Few of us—not even pundits (ahem!)—had anything to do with that.

He did it all by himself because, whatever his mental level, he has no common sense.

So gently and kindly ask those questions. It will seem slow but things will move faster because of them. Do it.